This post is going to get Rant-Heavy, so if you have a strong opinion on this group, their song and their PV's, and you get offended easily by another person's rather strong opinion, then you probably shouldn't read this post. I have my opinions, and whilst I may think that they are justified, you may think differently. If you don't mind reading a bitch-rant, then proceed at your own risk~ 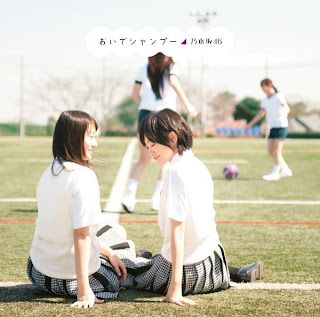 AKB48.02 have recently released their second single, titled Hideous Dresses Part 2, I mean Oide Sampoo, whilst also rivaling the debut single of Squeak-voiced Sashihara Rino and knocking her out of first place for first day single sales. Being the follow-up single of the rather bland and crap-tastic, Guru Guru Curtain, you would expect something more from this group after having such a simple and lack-luster debut - but how does Oide Shampoo itself hold up? 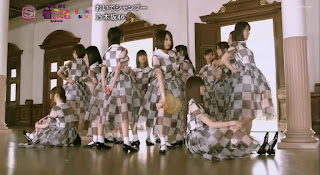 I swear, this is the era of the Hideous Dresses...
Oide Shampoo is the latest release from AKB48's copy group, and whilst I was actually expecting a little more from them this time around, I am not exactly surprised with what we are given here - a lack-luster, and rather disappointing, video of the girls. Oh, and more hideous dresses - but I think that this is what we are to expect from these girls from now on. Horrible dresses, shit PV's and generic music.
... Sounds about right? :/ 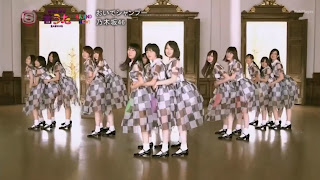 Butt-humping? Seriously?
Okay, maybe I'm just whining and being a bitch - but considering their first PV was pretty horrible, I really was expecting this one to be a little more interesting. Sadly, that wasn't the case here. All we are really treated to is the girls dancing, butt-humping and close-up shots... and some skirt hitching. But that's it. It is so basic - basic song, basic dance, basic formula and basic everything. There really is no highlight to this video at all other than the controversial skirt-lifting, and even then that isn't very exciting.
Really, Aki-P, you couldn't part with your cash for your biggest successes rival group? You created fucking Manatsu no Sounds Good! and RIVER! What the fuck made you think this would qualify for something Number 1 worthy!?
Actually, let's beg this question right now - How the HELL did squeaky-voiced Sashihara lose against the guys? At least her song had some personality and a pretty backdrop to go with her horrible voice! 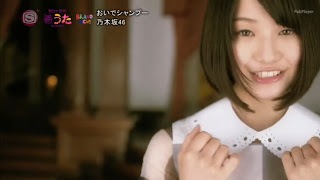 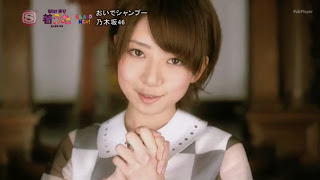 Oh look, it's Yuko 2.0 and Mariko 2.0!
I really do wonder how the hell this song even got higher than number 25, because it's really just a basic Idol song, one that anyone could make! Okay, I admit - it's cute and catchy, but other than that, it really has no personality or any other gratifying trait to its name that makes it anywhere near decent for the Number 1 Oricon spot.
... Oh wait, they are a group created by the man who made AKB - of course really good music wouldn't touch that Number 1 spot, no matter how simple and generic the song could be... aye aye aye... I'm going to say that the only redeeming quality about this entire PV and song is that the song is cute and catchy, and the backdrop is nice - but that is really it. The song is pretty simple, the dance is very unenthusiastic (like Guru Guru Curtain's was) and boring, the dresses are hideous, and these girls are just as dull as Maeda Atsuko is in Give Me Five!'s PV. 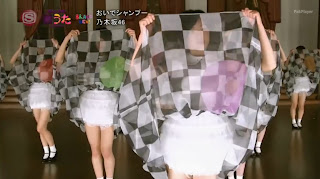 Even this 'controversial dance move' can't save this piece of shite
Watching this Crap-tastrophe makes me wonder what this video could have been like - given the name of the video, these girls could have been endorsing a specific brand of shampoo or having a sleepover and doing each others hair. They could have been in a hairdressers, or they could have been in a spa or dancing around bubble baths, hell, have them in the baths - it would have been more interesting than the pile of snore we have here! There could have been so many ways to make this video interesting, a way to strengthen the song. But no. No, we had to be given something so simple, so basic.
It really makes me wonder why Aki-P calls them AKB's 'rival' group, because given the songs and shit PV's they are getting, they sure aren't acting like official rivals. More like the little sisters who can't stand up to their big sister who everyone seems to like more. 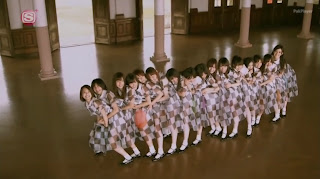 Nogizaka46 have really been a disappointing group so far - if they seriously don't buck up their performances, songs, PV's and costumes, then I seriously have no hope for them. The only thing that will currently sell them is the fact that they are 'Rivals' (LOL sure) of AKB48. Let's pray for the 3rd single being semi-decent, shall we?