An Idols Fighting Spirit - An Interview with Satanic Punish

I would like to start this post by thanking Satanic Punish manager and producer, Fudou Gantetsu, for reaching out to me in regards to this interview and for allowing me to promote the group and its members. I would also like to thank both members of Satanic Punish for taking time out of their work schedule to answer these questions and for the opportunity to share their answers with everyone who reads this post. Furthermore, I would like to thank Fudou for permitting the use of photo's from both the official website and Twitter account for the group. Full credit will be given for each photo used.
I would also like to extend my thanks to translator Janjan, who aided me with some of the more difficult parts of the interview, as well as Tom Jeffery's and Just Panda for proof-reading this post. 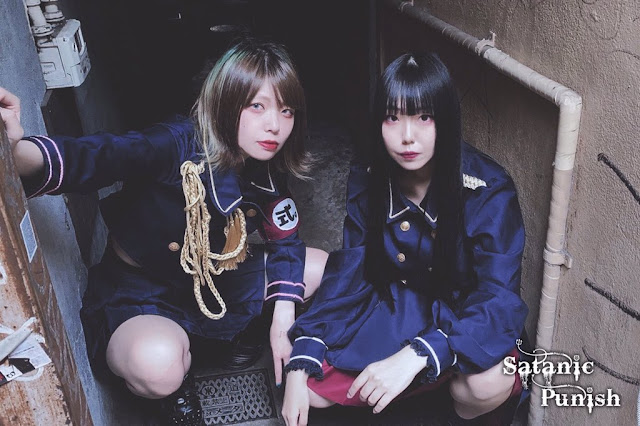 L: Webshiki.  |  R: Himeno Usagi
(Photo courtesy of @SatanicPunish)
Based in Tokyo, Japan, Satanic Punish came together in June of 2019 as a metal-idol group that sing about the absurdities of the world and the evil that surrounds us. Paired with a band sound that involves heavy and powerful melodies in each song, every release that this group delivers is heavier than the last thanks to the recent inclusion of 'death vocals' in songs such as Pray For Satan and their up-coming single, Alpha Omega -ΑΩ-.
Comprised of two members - Leader Webshiki. and songstress Himeno Usagi - Satanic Punish strives to better themselves as singers whilst also making a name for themselves both as underground idols and within the overseas Japanese music fandom. With their energetic live performances and brutal lyrics that set them apart from the rest, Satanic Punish are ready to punish the sinners of the world and drill their message into the depths of your soul.
Now almost a year after the groups rebirth back in February this year, Satanic Punish stand stronger than ever despite the initial struggles of 2020, and will enter the new year with a powerful sound and a bond made of steel that only these two members could create. So with the end of the year in mind and a desire to understand the members a little more both on and off the stage, I have been given the chance to interview the members of Satanic Punish in order to get to know the girls behind the music a little more.
INTERVIEW
Key:
W: Webshiki.
U: Himeno Usagi
F: Fudou Gantetsu
2020 has been a unique and trying year for everyone, but can you tell me what has been the most memorable part of the year for you since debuting as Satanic Punish members?
W: At first I was both anxious and nervous about our first live performance as a two-person formation, but once the live started I realised that the two of us could perform comfortably together.
U: I was extremely nervous about our first performance with the current formation, but the fun I had far outweighed the tension that I had been feeling. Also, I feel that both of our performance and singing ability has improved since the current lineup was established.
Similarly, is there something that you have been thankful for since beginning your Idol activities?
W: I had the opportunity to hear various people praise my death voice for the first time.
U: There is a high chance of meeting the people that support you as an Idol. I have never had this much support from others, so I definitely want to respond to it.
Satanic Punish has become known for the truthfulness in their lyrics and most recently, the use of Death vocals in newer songs. Can you tell me what you believe is the strength of Satanic Punish in its current form?
W: Our singing ability, and even though I'm still training my voice I think that my death growl and Usagi's clean vocals are well balanced.
U: Our singing ability. I think there is a good balance between the clean singing parts and Webshiki's death growl. Of course there is still a long way to go, but I think that our performance style is also one of our strengths because Webshiki and I are the opposite of each other. 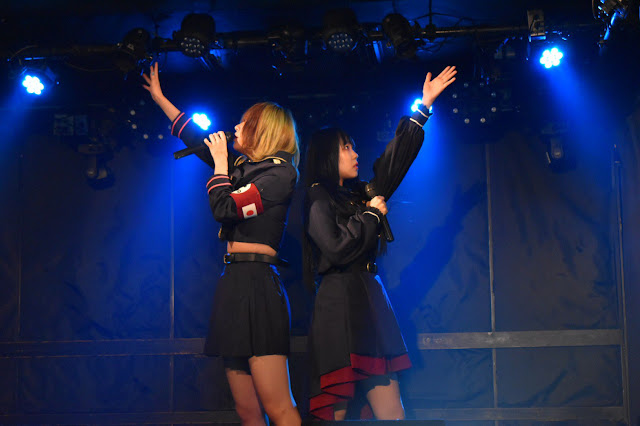 Satanic Punish performing in September 2020 (Photo courtesy of @SatanicPunish)
It has almost been a full year since you began working together, so would it be okay to tell the readers what you admire and respect about each other?
W: Usagi is an incredibly hard worker, and even before we became a two-person formation she was a solid and reliable person who thinks about the members more than anyone else.
U: When we first met each other, the first person who talked to me was actually Webshiki, so she has been supportive since the beginning. She has helped me out in a various ways such as noticing things that I did not notice and understanding our surroundings. Webshiki also managed to take over the role of providing death growls for our songs despite the sudden change in our formation, and I felt that the quality of her death growl was pretty high after I first heard it. She is a hard worker and I myself hate to lose, so I find her pretty encouraging.
Though you perform it regularly during concerts, Alpha Omega -ΑΩ- has yet to be released. So, can you comment on something that you would like fans and listeners to focus on when they hear the new single?
W: The swing of the song as two people sing together.
U: The Death Growls × the Clean singing parts of the song. I think that this will become a single that features the best of both worlds.
To follow that question, which Satanic Punish song is your favourite to sing live?
W: Alpha Omega
U: Alpha Omega
Of course there are many experiences that you will treasure as an idol, but is there something that you would like to do in the future as a member of Satanic Punish?
W: Even though I'm an idol, I would like to perform with a band in a live concert.
U: There are many things that I want to do, but I want to find something that only Satanic Punish can do.
Following that question, do you both have individual goals that you would like to achieve both as an idol and outside of activities?
W: As an idol I would like to have others appreciate my death growl more, and in my private life it would be dieting.
U: As an Idol I want to continue strengthening the clean singing parts of our music, whilst also acquiring the expressive power to suit each song. In my personal life I want to balance both my studies and activities, and to make use of what I have learned by studying various types of music and languages. 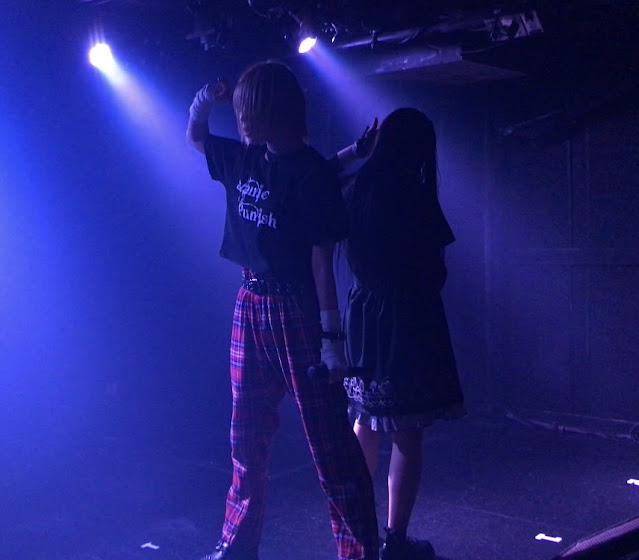 (Photo courtesy of @SatanicPunish)
Please tell us about something that motivates and inspires you as an Idol and member of Satanic Punish at present.
W: Various things, such as performing live and the words that we receive from the fans.
U: The support from our fans and doing live shows.
This a fun question for you both! If you were transported into the world of a Horror Movie, what kind of characters would you become?
W: I want to become the neighbour or a friend of the main characters and watch the story develop from a close distance.
U: Maybe I would feel frightened.
Likewise, if your producer Fudou was in a Horror Movie what type of character would he play?
F: Pyramid Head.
Before we end the interview, please let us know what you are most thankful for in this moment?
W: Getting to know you.
U: The miracle that is meeting everyone despite the great odds.
To conclude the interview, please leave a message for the fans and let us know what your goals are for 2021.
W: Thank you for your support with the current formation of Satanic Punish! We hope that you can get to know us better through this interview. Right now our goals for the New Year are vague, but we would like more people to know about us!
Thank you for your continued support of Satanic Punish!
U: Thank you very much for all the support that we have received since becoming a 2 member group. We hope that this interview will help you to learn a little more about us, and we will continue to work hard in 2021 to improve our performance and singing ability so that even more people can learn about Satanic Punish and get to know us better. Your support is invigorating for us.
Thank you for your continued support of Satanic Punish.
Thank you both for taking part in this interview, and thank you to Satanic Punish producer Fudou for organising it. Please look forward to the groups up-coming single, Alpha Omega -ΑΩ-, which is scheduled for release on December 25th, 2020. Also be sure to follow them on their social media accounts for future updates, live event schedules and more! (Photo courtesy of @SatanicPunish)
Bonus Questions
Do you have a favourite English word or phrase?
W: K-12
U: Always be yourself.
Is there something that you are currently obsessed with outside of live events, work and school?
W: Watching movies.
U: Watching anime, reading manga and listening to music.
What is your favourite season?
W: Winter
U: Autumn / Fall
Out of curiosity, how do you like to wind down and relax once a live show ends?
W: I smoke.
U: I eat some delicious rice and then warm up in the bath afterwards.
Once again I would like to thank both Webshiki. and Himeno Usagi for taking part in this interview, and will further my thanks to Fudou Gantetsu for making this interview a possibility. I am also incredibly grateful to Janjan for helping me with translations, and thankful for Tom Jeffery and Just Panda's help in proof-reading to make sure the interview is fit for publication.
To all who have read this, thank you for taking the time out of your day and having an interest in this interview with Satanic Punish. Be sure to check out all of the official links and follow the group if you like what you have read here or seen on Twitter and YouTube, and for those who are already fans please continue your support into 2021. Finally, please look forward to the groups up-coming single release and all music after that.
Links:
Satanic Punish Website
Satanic Punish YouTube
Satanic Punish Soundcloud
Satanic Punish BASE Shop
Social Media:
Satanic Punish Twitter
Webshiki. Twitter
Himeno Usagi Twitter
Fudou Gantestu Twitter
Posted by Chiima at 23:38