The Night of Resurrection Begins in NECRONOMIDOL's 'TUPILAQ' (Song Review)

*As per usual, all thoughts and opinions are my own, and all words written within this post are completely subjective. Of course, I will respect your views on the song in question, as long as you respect my views. We are individuals at the end of the day, and our tastes will sometimes clash. My only hope is that we can agree to disagree, and to shape one another's points of view with our opinions, as opposed to trying to force our own feelings down each others throats.

**In addition, I'm human. I make mistakes. So, any typo's or errors that I have left in this post, please feel free to call me out on them. I want to continue improving in any way I can when it comes to fixing my mistakes, so if you see any, again: call me out. There is no shame in wanting to make my blog a tidier, somewhat easier to read place. Thank you, in advance. 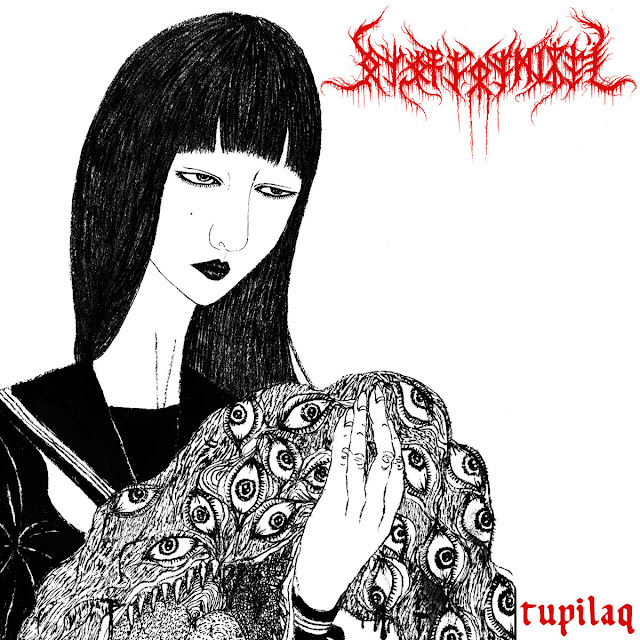 Just 10 days shy of a year since their last official music release, NECRONOMIDOL return with TUPILAQ, a song that solidifies the groups resurrection after a turbulent start to the year. With Tsukishiro Himari at the helm, this release brings the dormant group to life, and successfully debuts a shiny new lineup that will either ignite the flames of interest, or quash the remaining fragments of dedication a few fans once held?

As a fan of the group, I am understandably excited for any release they put out, but with the recent changes in the group, there has been a little bit of hesitation from the fans, myself included. Will the sound be consistent with their past releases, and how will the vocals hold up now that some of the core singers are out of the group? Can NECRONOMIDOL withstand such a drastic change, or will their music suffer in the process?

It may be too early to tell right now, but I have a lot of faith in the group and all that they produce. So, with that in mind, it's time to take a look at the latest release from NECRONOMIDOL, and to see if they meet expectation, or fall further from grace.

The time for judgement is now! What will the verdict be...?

Listen with me on Bandcamp. 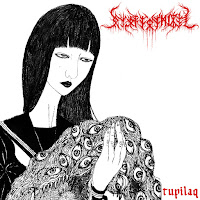 An unexpected release - or is it? - TUPILAQ serves as the groups 7th single release, and acts as the debut of members Kamino Nana, Rukawa Shiki and Toda Roa, all of whom were unveiled as the groups newest recruits back in early May. With a bewitching sound and Gothic vibe, TUPILAQ continues to sport a sound style we all know and love, whilst still delivering something fresh to the table.

I don't know what it is, but TUPILAQ feels unique. Though it has a familiar presence that is recognisable, there is something different about this song that I have not heard before, and I can't help but think it sounds refreshing whilst still encompassing the influence of its predecessors. Heck, I even think that it sounds a little sexy, and whilst I never thought I would pair that word with any NECROMA song, I can't deny that it works well, and even enhances the songs charm.

It's honestly beautiful, and I can't help but find TUPILAQ pretty stimulating as a song. The soft vocals paired with the harsh instrumental only fuels my interest in the song itself, and whilst I don't consider it the groups strongest song, I am still impressed with how good it sounds. It's an impressive track, and currently one of the most mature songs I have heard from this group thus far.

With that said, I can't help but think that this song was created in Himari's image, and it honestly would not surprise me if Himari herself had a hand in its creation. I say this because, in all its dark and bewitching glory, TUPILAQ oozes a certain amount of femininity and confidence that other NECROMA songs have lacked in the past, but now that Himari is leader, we are given a song that matches with her own aura of femininity and confidence perfectly. Of course I could be wrong here, but this is how it feels to me, and I can't get it out of my head just how womanly the song feels, and how unique it is against its predecessors.

Oh, and I really enjoy how well the vocals work together. There is a beautiful balance here, with each member complimenting one another, and I believe that only adds to the strengths of this song.


*Trigger Warning: This music video contains images of blood, and a few other graphic scenes that may disturb some viewers. Viewer discretion is advised.

In a surprising twist, NECRONOMIDOL also released a music video along with the song. Why surprised, you may ask? Because this is NECROMA, and when it comes to releasing a music video at the same time as the song, it typically isn't done. Not since I've been a fan, at least. If anything, I'm used to waiting for six months before I see an accompanying video, so seeing TUPILAQ in my subscription box on YouTube was unexpected.

Moving on, TUPILAQ is a lot of fun to watch. Yeah, it has its moments that makes me cringe because I'm squeamish, but outside of those parts, I do think it's a good video with some nice effects, and some visually stimulating moments that will appeal to its viewers. It also has a nice moment during the opening sequence that some fans may recognise, and further cements the idea I have that Himari had a hand in this music videos creation, because it's basically an exact replica from one of her beloved CLAMP works.

Aside from very obvious homage to a certain anime, the music video offers a lot visually, an introduces us to some beautiful scenes, and some nice contrasting moments thanks to the day and night scenes. It's eerie and bewitching, captures that idea of resurrection and starting anew perfectly, and ultimately delivers a visually stimulating experience that is reminiscent of some of NECROMA's older music videos, but still offers up something different thanks to its unstable and dream-like imagery.

It works, and I was honestly impressed by what I saw.

As a song, TUPILAQ impresses and intrigues me, and as a video it entertains. Overall, this is a very promising release, and a beautiful introduction to the new members that is worthy of its resurrection status. Sure, it may not appeal to everyone who comes across it, but I do think that it will keep the current NECROMA fans interested, and may even bring in a couple of new fans thanks to its gorgeous and bewitching sound.

TUPILAQ is great, and I'm really enjoying this song right now. It's not the heaviest I have heard from NECROMA, nor is it the strongest, but it is still a work of beauty, and it compliments the current formation of NECRONOMIDOL well.

I hope that you all give it a chance, take note of the vocals and how they contrast with the instrumental, and finally, I hope you enjoy TUPILAQ, the answer NECRONOMIDOL's evolution.

In a bid to wrap this up, I will end my review with this:

I enjoy TUPILAQ. I like how it embodies a similar style and structure to previous songs, whilst holding its own with a unique, somewhat more mature sound that we haven't heard before now. I like that the vocals flow well together, and that the chorus feels so much more unified than before, and I love that this song feels a little sexier than previous tracks. It's refreshing in its own way, and I do think that it will appeal to a variety of people.

Of course, I expected the song itself to be heavier, but I'm happy that it was a lot softer than expected. Yes, the instrumental is a little bit disorienting - but that goes for most of NECRONOMIDOL's songs - but it's oddly relaxing at times, and when paired with the vocals, it feels somewhat dreamlike and otherworldly, and only furthers this idea of it being an oddly relaxing song. Because of this, I can't help but like and admire it, and with each listen I seem to enjoy it more and more.

Still, it is a heavier track than the ones I am used to listening to daily, and whilst I certainly enjoy TUPILAQ, I know that I will revisit it a little less than other songs in my playlist. It's such a good song though, one that I would happily replay over and over again, however it's not the kind of song I will go back to for days on end, simply because I prefer listening to lighter, bubblegum-infused tracks when going about my everyday antics. Regardless, I do hope to see this song on my year end list, because it's a great song in general, as well as a beautiful introduction to the newest members.

To conclude this long-winded post: I enjoy TUPILAQ a great deal, and I look forward to returning to it from time to time, and taking my time with learning the lyrics and the meaning behind it. It's enjoyable, it has brilliant vocals, and though it isn't the strongest of the groups releases, it's still a great addition to their song catalogue, and one I look forward to seeing performed live.

TUPILAQ is a lot of fun, and whilst I am certainly missing my anime tracks after listening to heavy songs two days in a row, I definitely don't regret tuning into this. NECRONOMIDOL' return is a positive one, and despite the issues that 2020 has presented, TUPILAQ is the answer we needed from the group after such a tumultuous beginning to the year.

This was something to look forward to with the new lineup, and I am glad that it met my expectations. It really was a blast to listen to, and I am honestly excited for NECROMA's future releases.

To end this, I want to say that I never anticipated a second song review this quickly. However, with the unexpected release of TUPILAQ and my undying devotion to the group, I thought that it would be good to sit down and talk about it. Sure, the review is pretty choppy and not that well-written, but I didn't want to pass up the chance to express my thoughts on it. That, and this is one of a few ways I can support them.

Of course I hope that you enjoy the song and review as well, and it would be great if this furthered your interest in the group and gave you a reason to seek out more of their music. And even if it doesn't, thank you for giving the song a chance, and thank you for reading this review, I really do appreciate it.

As always, I would be happy to hear your own thoughts regarding this release, and see how much we agree or disagree. Whatever your verdict is, just know that your opinion is valid, and that there is no right or wrong when it comes to enjoying music.

Until the next post everyone, thank you very much for sitting through this, and I hope to see you again soon. Please continue to stay safe, happy and healthy, and be sure to take care of your mental and physical well-being.