On this day, September 18th 2019, KANA will graduate from LONDON BLUE amidst the celebrations of the groups sixth anniversary. With 5 years under her belt, a leadership that lasted well over a year and a boatload of memories from her time as an idol, KANA has experienced a lot in her time as an idol.

From the indies trials to holding a major debut in 2018, learning how to play the drums and choreographing the groups dances, KANA has fulfilled her time as an idol and created a lot of memories along the way. Now it's time to create her last few memories on the stage before walking behind the curtains and creating new memories with the future of LONDON BLUE. But before she graduates and takes a step back to teach a new generation, let's take a moment to appreciate an idol I adore.

It's time to sit back and talk about KANA, an Idol I appreciate. It's that time again, everyone. Let's appreciate the Idols that we love before they graduate from our world. 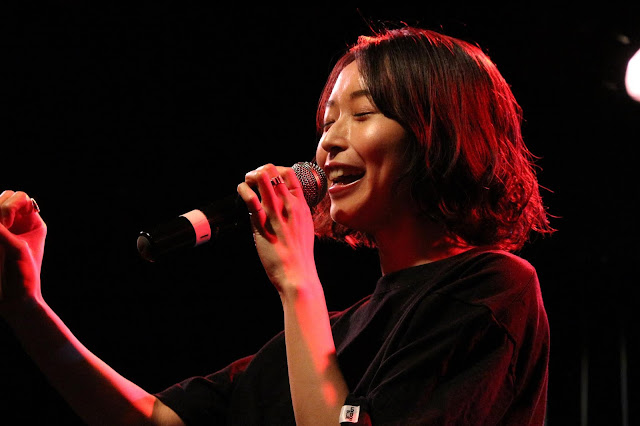 I learned about KANA back in 2016, sometime after discovering LONDON BLUE and asking if I could review their latest album for JaME. At the time I didn't know much about them aside from their names, a little bit of background info and the fact that they were created to promote the joys of both Japanese and British music. By 2017 I was no longer following them.

And then Hyper Japan Festival 2018 happened. When the schedule for who was performing was officially released I recognised a group - LONDON BLUE, except the lineup was different. KANA was now the leader, and three new members would be joining, but that was all it took: One familiar group name and my intrigue was sparked once more, but this time I was in it for the long run. Thanks to Hyper Japan I was able to become a fan of LONDON BLUE.

Now five years after joining LONDON BLUE, KANA is ready to graduate on the groups own 6th anniversary. With this, she will join her fellow graduates and friends on the sidelines, supporting LONDON BLUE in front of the stage she once stood upon. 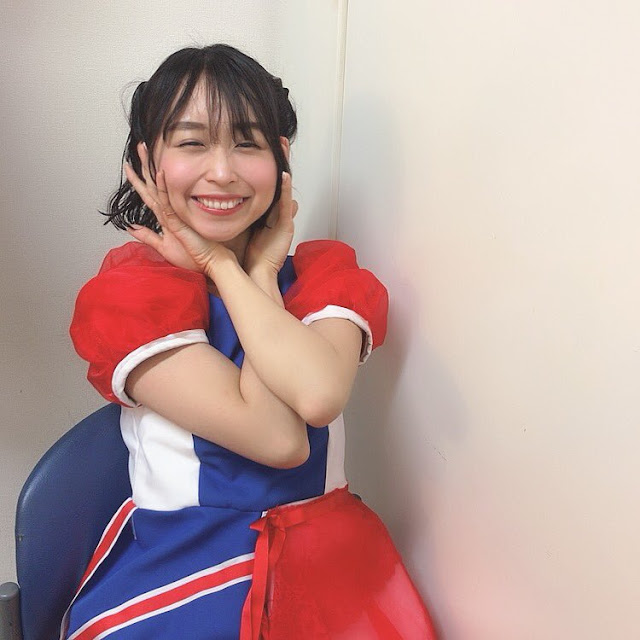 Vibrant on stage and serious behind the scenes, KANA is an idol who has various sides to her. Whether she is full of beans as a performer or teaching the other members choreography, this is a girl who tries her hardest in everything she does whilst showcasing a sunny personality.

In her five years as an idol KANA has achieved so much. From learning how to play the drums in order to create the LONDON BLUE band, to becoming the groups choreographer and eventual leader, KANA has achieved more than one would expect from an underground idol, but she has done it gradually whilst continually showcasing her sunshine personality and brilliant smile. Through thick and thin, KANA has tried her best and jumped even the highest hurdles, and it is thanks to her perseverance that she was able to see LONDON BLUE shine for 5 years.

And now, five years on, she finally leaves that stage behind to work behind the scenes. Today she has graduated from LONDON BLUE and her 'Kanapyon' moniker, ready to restart as Kawaguchi Kana. 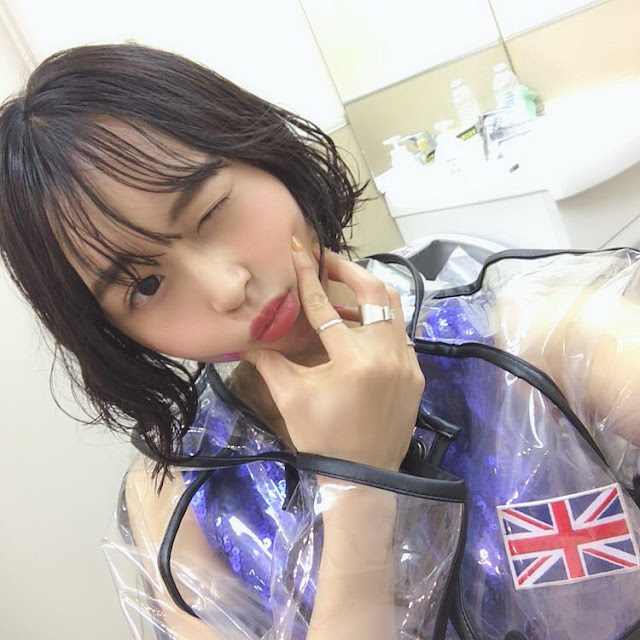 There is a lot to love and appreciate when it comes to KANA. From her almost carefree attitude to her seriousness, the spirit she has for the group and the warmth she holds for others, as well as the hard work and effort she puts into promoting LONDON BLUE, there is so much to adore about this girl, and I don't doubt that she will continue to showcase these same traits behind the scenes as she aids the future of LONDON BLUE both on and off the stage.

I feel lucky as a fan to hold such fond memories of KANA, regardless of the fact that I have only followed her for about a year or more now. From the sidelines - okay, from across the ocean - I have been able to watch KANA grow from an unsure leader to strong, reliable mentor who can hold her own. I have been able to see her persevere as a choreographer for the group, seen her bond with others grow, and experienced her dazzling aura on and off the stage.

I am happy that I could meet KANA and speak with her as both a fan and an interviewer, experience her kindness and watch her shine on stage. I feel lucky in so many ways, because whilst she may not be my favourite idol out there, KANA is someone I admire for her hard work, her work ethic and her endurance in being an idol for five years. She has tried her best since beginning from the bottom, and now she sits at the top proudly, an Idol who watched her group grow in members, release a major debut single and perform their first UK live. 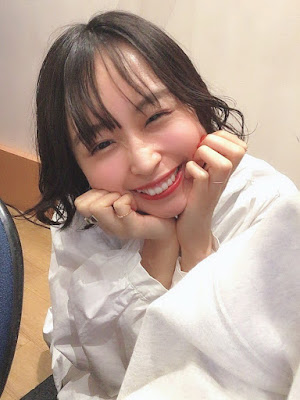 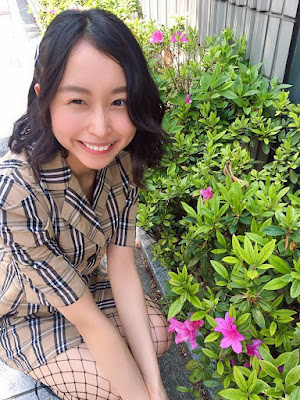 The idol road isn't easy, especially when you lose the comrades you know so well in one fell swoop. For KANA, who debuted in 2014 and watched her seniors graduate in the latter half of 2017 and the beginning of 2018, it must have been hard to take on the Leadership position and watch new members debut and eventually leave, especially after being a part of a stable lineup for 3 years.

Yet KANA moved forward, strengthening herself as well as the group until this moment. Now, she leaves the group at her highest point - a drummer, choreographer and leader, someone who saw LONDON BLUE through their UK debut, their major debut with King Records and more. And in her grand finale she goes out with a bang; a reunion with former group members, present members and the future member of LONDON BLUE, all on one stage. For her Graduation, KANA was able to create one of LONDON BLUE's brightest, most memorable performances as an idol.

Thanks to her endurance, her sunny personality, warmth and seriousness, KANA was able to continue the incredible bond that LONDON BLUE holds. Regardless of when they joined or how soon they graduated, the returning members who joined KANA on the stage that celebrated both her graduation and the groups 6th anniversary are proof of the love everyone holds for KANA, as well as the strength of LONDON BLUE's bond that spans the groups 7 generations.

KANA is cute, an idol who works hard and perseveres. She is someone who wanted to learn new things, gain new strengths and create a warm environment for LONDON BLUE, and through her five year tenure she was able to do just that. As a member and a leader, there is so much that KANA achieved with LONDON BLUE.

Without a doubt she has made the former members, staff and her fans proud, and I am thankful that I could watch her as a fan in these moments.

Thank you for everything, KANA. You have truly allowed LONDON BLUE to grow under your leadership, and I look forward to seeing how you help the future member(s) of the group grow in order to continue this legacy you have been a part of. 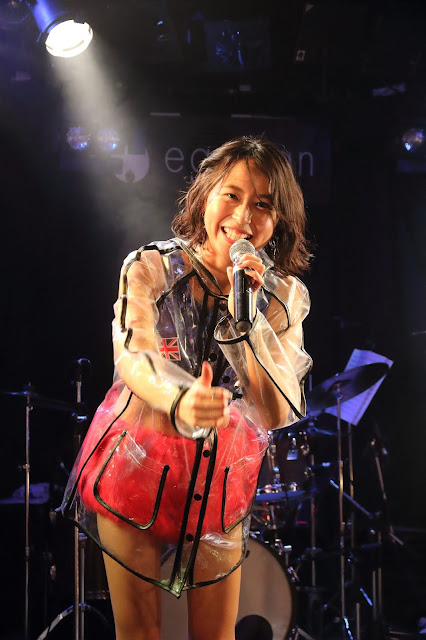 Whether she continues creating choreography for LONDON BLUE or becomes a member of society once more, it doesn't matter. KANA has done all she can for the group as an idol, and will now watch over the group with the same love and warmth that members before her hold for LONDON BLUE now.

I only wish KANA all the happiness, joy and delight this world has to offer, and I hope that she continues to work with LONDON BLUE further in the future. For the short time I truly knew her as an idol, I am delighted that I could follow such a kind and hardworking person. KANA truly is one of a kind, and though she may not have been my favourite member of LONDON BLUE, she is someone I admired. I am thankful to have met her, to have interacted with her, and I am a proud fan.

KANA: Thank you for being our idol, for continuing until now and for working hard both on and off the stage these past five years. So much has been achieved, many memories have been made, and you have seen LONDON BLUE through challenging times as well as the fun moments, too. You have done so well, and I am thankful that I could meet you and truly understand your charm.

I'm going to miss you. Without your presence it will be a LONDON BLUE I don't know, but I look forward to the future. Still, without your sparkling energy I will feel a little lost. It will not be the same without you, KANA, but I know that you will continue to support LONDON BLUE from the sidelines and behind the curtains where you will watch the group shine in a new light.

Still, I hope that someday I can see you on that same stage again, and when that time comes I look forward to seeing how much more you have grown.

Now I have to say goodbye. It's time to watch you from even further away, but I look forward to the new achievements you will undoubtedly achieve. Thank you for everything. 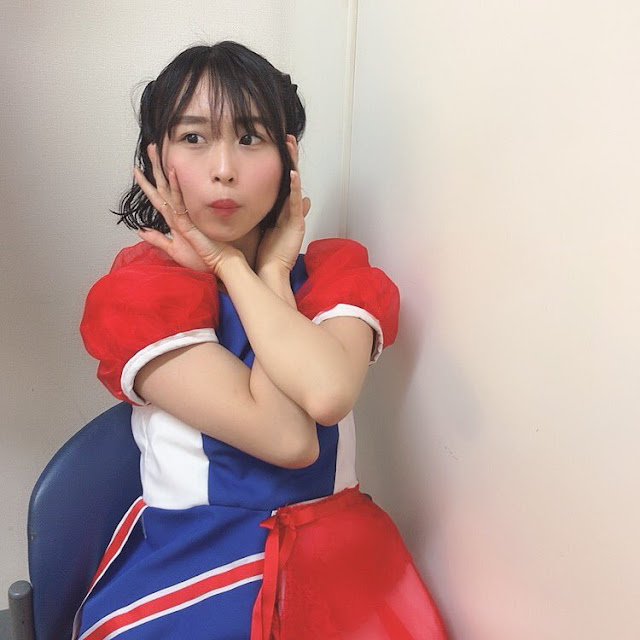 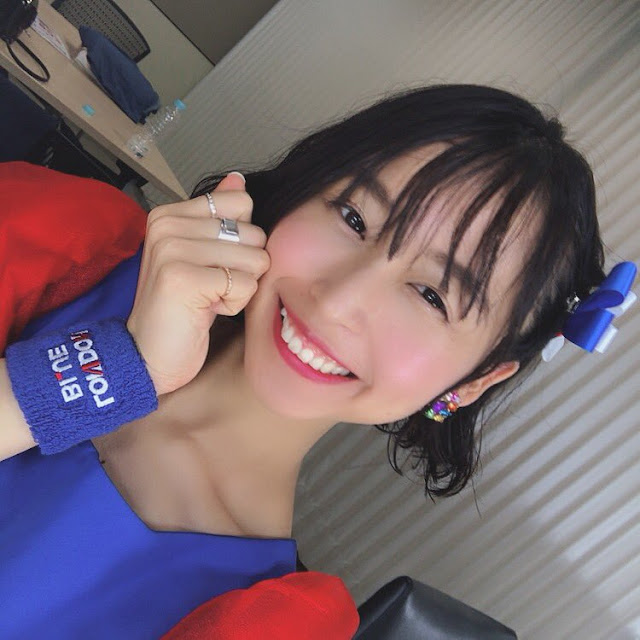 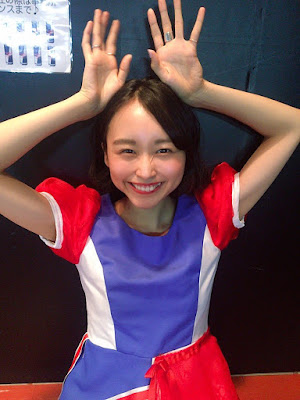 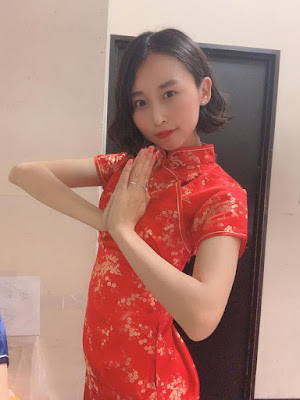 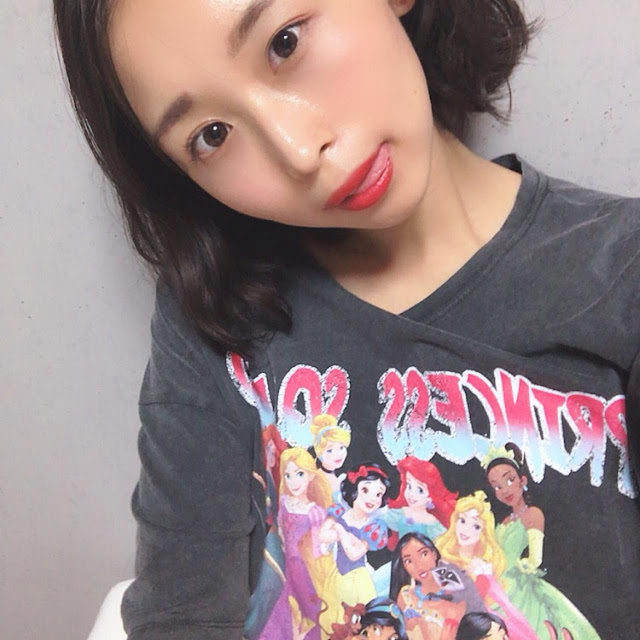 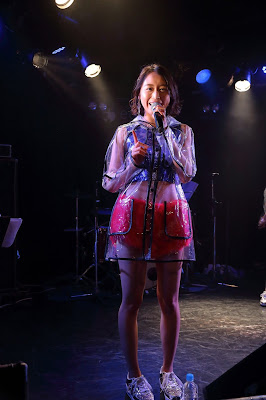 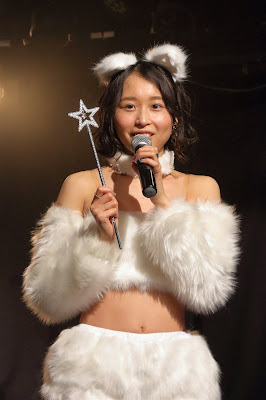 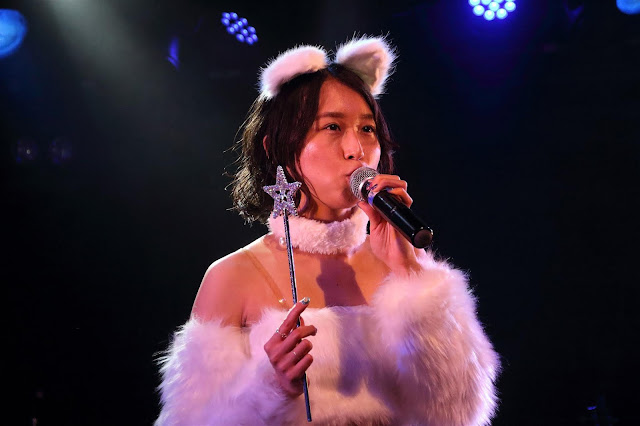 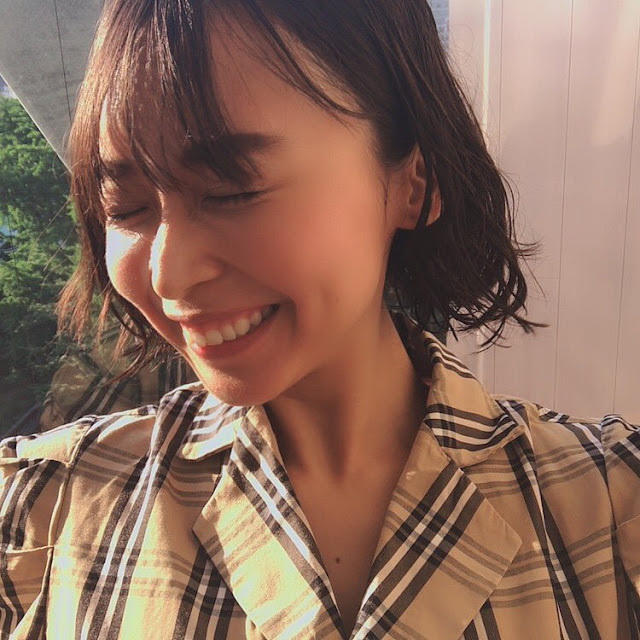 Kanapyon, 卒業おめでとう！Thank you for everything as a Leader and an Idol. I will miss you, but I look forward to your next step in the Entertainment Industry.  がんばって〜

From a cute and carefree idol to a cool, reliable leader, KANA has adapted to the groups own changes, only to dazzle even more than before. As a fan I have seen her dazzle the more time has passed, and despite only truly following her for over a year, I am happy to have seen KANA's growth. In such a short time she has done so much, and now the fruits of her labour have come to a close on this very day.

Thank you for all you have done, Kawaguchi Kana. I look forward to your next move. Until then, take care.