And in others news, I love HouPri. 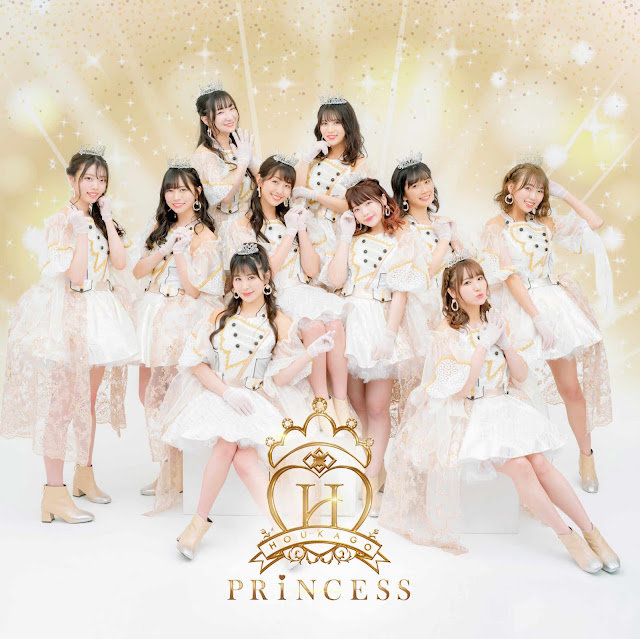 With July quickly swooping upon us, it comes as no surprise to see that Houkago Princess have already begun their usual round of promotional activities and release events in order to showcase their up-coming single, Shin Jidai Princess / Princess no Teigi. The first single of the year, this will also act as the official debut single for members Kohinata Nanase, Tani Nobara, Yamamoto Natsumi, Takano Hiyori, Aoi Mizuki and Sawada Momoka, whilst also being the first single to feature Sekine Sasara as the groups leader. Furthermore, the single will be the 10th Princess-themed release from the group, and will act as a new 'chapter' in the groups story. It is also Houkago Princesses first Princess-themed Double A-side, and will be the first single released within the 'Reiwa' era of Japan.

Set to drop on July 10th 2019, Shin Jidai Princess / Princess no Teigi will be available in five editions, and contain four tracks that will be standard for each edition.


The theme behind the up-coming single will also be the first in which Houkago Princess follow the concept of 'Houkago Princess', an idea that will showcase HouPri's past, with the present system of the group walking towards a future whilst acknowledging all that Houkago Princess has done since their debut in 2011. This idea is reflected in the lyrics of Shin Jidai Princess, which were revealed on May 2nd 2019 via the groups official website.

You can check out the lyrics HERE.

The lyrics include past lyrics and titles from the groups singles since their debut, as well as lyrics that talk about the beginning of a new era and walking towards a new future. Written by forrmer HouPri lyricist and composer, Ishitani Hikaru, the song will surely deliver a sense of nostalgia to those who are familiar with HouPri's sound, style and history.

And finally, on May 28th 2019, HouPri staff revealed the covers for the groups up-coming single! With five editions to choose from, which type will appeal to you and become a part of your collection upon the day of its release?

All covers were published to the groups official LINE blog, which you can check out HERE. 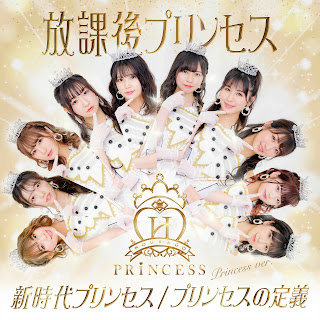 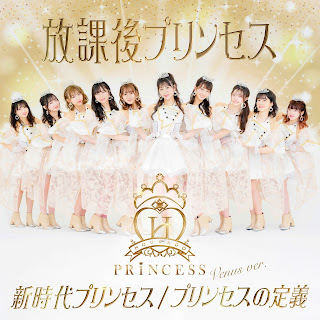 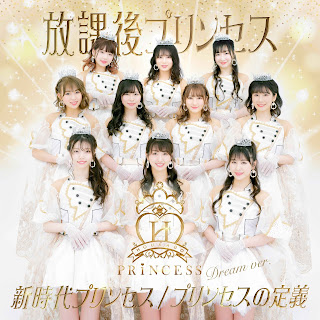 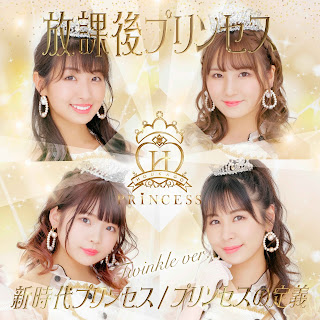 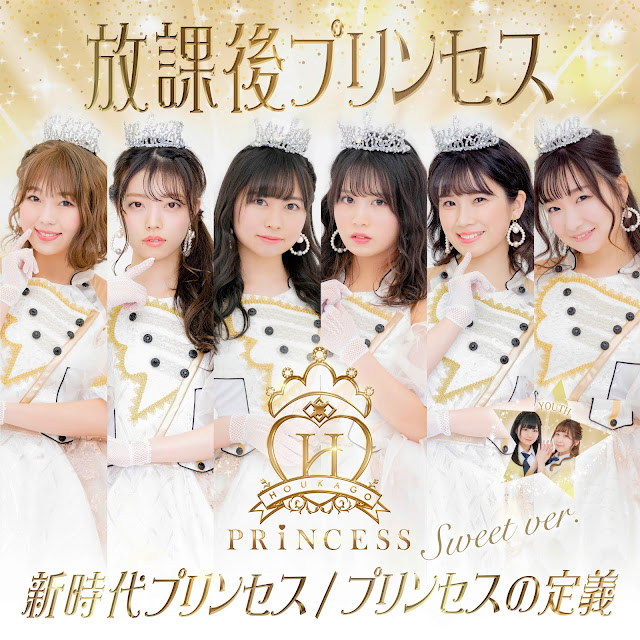 With the up-coming release, it seems that this will be the first single since late 2015 that will not include solo member covers. Though certain versions include central members - Venus version includes a Maika centre, whilst the Dream version has Sasara as its centre - each cover seems to represent the members somewhat equally.

Personally - and this is where my commentary will come in full-force - I like the covers, though I find them a little tacky for what I expect from HouPri these days. Though their covers are anything but realistic, there is a certain appeal to them, a sort of creativity I really enjoy. These are just very bog-standard covers, made with simple execution and not that much imagination. That said, I like the style itself... it's just, I have totally done something similar to the Sweet version cover for my banners.

So, I like the simplicity, but I have a problem with it, too. Because damn, I can never be happy, I swear. Still, I appreciate the prettiness of it all, and I like how the backdrop looks a little bit like a celebration of some form. It kinda reminds me of Birthday Cake oreos.

No, I am not kidding. These covers really do make me think of a bloody oreo.

I also really enjoy the colour scheme of these covers, and though I just bitched about the simplicity of it all, I really do like the layout of each cover. I love how the Princess version reminds me of a fan, how Sweet versions reminds me of the banners I have made in the past, and I love how the Dream version is photographed. If anything, each cover looks clean and appealing, and I can see why they chose these colours, the way everything has been edited, etc. It is rather eye-catching and everyone - and I mean everyone - looks so damn pretty.

I can't wait to own at least one of these CD's (moreso the Sweet version), because damn, I think this is a nice style to turn to for their 10th Princess themed single, and I think they all have their charm for each and every cover.

(My tune changed so quickly there. The more I write, the more I somehow convince myself I love these covers. God damnit XD)

Also, it makes me quite happy to see that in most of these covers, Yamamoto Natsumi is pretty damn present as a central figure, same with Hiyori. I was quite surprised, but hey, I'm glad; I would rather have new faces take a centre position than keep it to Sasara and Maika, let's be real.

So, yeah... pretty covers, though simple in style and execution, and a little too Hello! Project-esque for my liking. That said, it's a new direction for HouPri, and given how this is a brand new lineup, a brand new era and such, it makes sense to try something a little different. Regardless of my thoughts on the covers though, I am excited for the songs. I just pray a PV comes our way sooner rather than later, cause GOD I need to hear this song!

Oh, HouPrin Staff overlords, do not keep me waiting. Upload that PV NOW!

... Ahem, my impatience is rising. Moving along... 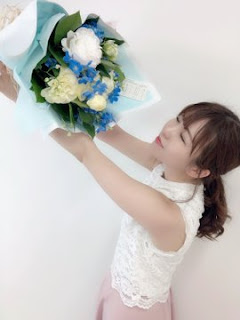 In other updates, HouPri YOUTH members Kansai Erina (pictured left) and Ozawa Ruru (pictured right) have both ended their activities with the group as of May 31st 2019. The news was announced via the Houkago Princess YOUTH blog on May 18th this year.

For Kansai Erina, the decision to to withdraw was made due to her declining health. Debuting in August 2017 as an Apprentice, Erina had initially withdrew from the program due to poor health, before rejoining the group. However, as Erina has not made a full recovery, she will withdraw from the group again. She did not take part in a final live performance before her departure.

Erina thanks fans for their support, and hopes to return to the stage again someday.

In regards to Ozawa Ruru, who debuted as a YOUTH apprentice in March of this year, it was decided that she would graduate from the group on May 31st, during a Team SWEET performance with fellow YOUTH members and selected members of Houkago Princess. Not much information has been revealed as to why Ruru has graduated aside from that it was decided she would leave the group.

Ruru thanks everyone who has supported her journey in YOUTH, and states that though the group will not have as many members, she thanks fans for their continued support until the end of her time within the group.

Finally, in random Houkago Princess News, the generation system between members seems to no longer be in effect. Since the addition of members Takano Hiyori, Aoi Mizuki and Sawada Momoka - who would have acted as either the 9th or 10th generation - the official website no longer showcases generation numbers for each member.

And that is all when it comes to HouPri news and all things updated. I blabbed on a little to a lot here, but hopefully this information helps all who want to keep updated within the Royal Court. Obviously, I hope you like the covers for the up-coming single, and I would like to think that the smallest pieces of news keep you on top of everything when it comes to the group I love the most within the idol universe at this moment in time.

This is all I have today, however. I hope that I see you in thenext post, and I want you to take care and enjoy music. Stay happy and healthy, dear readers.