*Calling out my mistakes, typo's and spelling errors is appreciated here. Call that shit out, help me a little bit, and make this blog a better place. Thank you.

With 10 years of entertainment under her belt and a desire to perform, Oguma Ayame currently has one physical release to her name, as well as a handful of digital releases. Despite this small pool of songs to her name, Ayame has a dedicated following thanks to her ability to create laughter on and off the stage.

And though we may not have a chance to see her perform, we can instead take a look at her style of music. It's time to experience the tunes of a 10-year entertainer in all her glory. Are you ready to listen to some music? 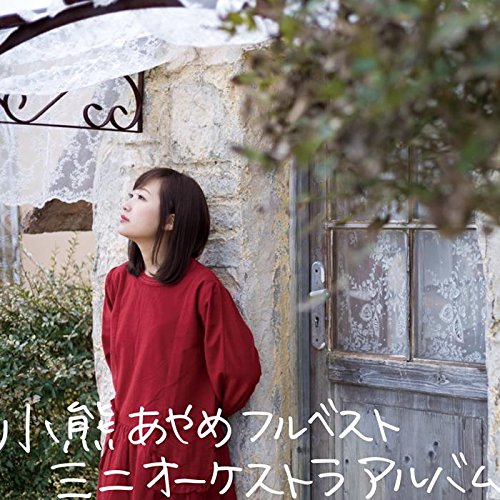 It has been a while since I yearned to review a single or album this strongly, but ever since receiving Oguma Ayame's first studio mini-album as a gift some months back, I have felt a weird pull and desire to talk about Oguma's music on my blog. Sure, my thoughts regarding her music may not be well-structured when I get to talking about this album in full, but I'm excited to talk about it, nonetheless.

Having owned Oguma Ayame Full Best Mini Orchestra Album for a few months now, I have had my fair share of time to listen to each track more than once, which has in turn allowed me to form a solid opinion of the release in its entirety. And yes, I want to share these very thoughts with you because, dear readers, sharing is caring, and also because I can post what the heck I want on here. So yes, it's another album-esque review, from me to you. Because I can.

And before I spew even more lacey nonsense, let's chitter a little bit about Oguma Ayame herself:

From what has been recorded so far, Oguma Ayame has been active within the entertainment industry for 10 years, starting out as a Maid in Akihabara where she would perform on a small stage for the customers, before deciding that she wanted to take on a live-house stage and act as an idol. In May 2011, Ayame began her idol-career with the group Chocolate☆Whip, where she acted as a 3rd generation member and completed the 4-member lineup. In 2013, Ayame began her solo activities, and in March 2014 went solo full time after Chocolate☆Whip's disbandment.

When she isn't singing live, Ayame also works as an ear-picking and massage specialist, and promotes her work-place to fans on Twitter. Despite holding down a second job, Ayame is serious about performing and not doing anything half-way as an idol, which may be why she has continued going strong for 10 years, despite the set backs she may have faced in her journey as a chika-idol.

And with that short blurb out of the way, it's time to delve into the album itself. It's time to give Oguma Ayame Full Best Mini Orchestra Album a chance, but what will the final verdict be?

Read on and find out~

The Indie, The Idol & The Infamous Live Overview: The London Side

*All images used have been credited to their original owners. Any photos used without credits are my own images
**Any mistakes present in the post, please do feel free to call me out on that shit. We all have things we gotta improve on, and I definitely need to improve on my Typos.

With idol lives becoming a more frequent phenomena within the UK music scene, it seemed like a no-brainer that Orion Live's next step would be to bring along some of Japan's most mesmirising underground performers, where they would show them off in three of the UK's leading music-savvy scenes. 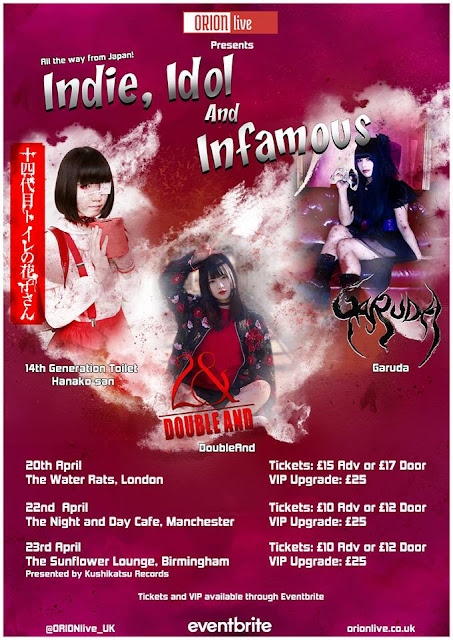 Presented by Orion Live and starting off in London on April 20th, heading over to Manchester on April 22nd and rounding things off in Birmingham on April 23rd, three underground solo idols -  DOUBLE AND (Saki), GARUDA (Sakimura Yuffie) and 14th Generation Toilet Hanako-san (Hanako) - embarked on an Easter-weekend and Bank Holiday tour, with Saki leading the way as the Headlining act of the Indie, Idol & Infamous live shows.

And in a surprise twist just days before the event itself, it was revealed that Rukatama of the group MELON BATAKE A GO GO, of which Yuffie is also a member of, would be joining the girls during the tour. Acting as a goods salesperson for the GARUDA stall, as well as a camera-person for all of Yuffie's live performances, Rukatama took the chance to travel to the UK, whilst also promoting herself and MELON BATAKE A GO GO to the foreign fans who had travelled to see these three girls perform on a brand new stage.

Travelling to three cities and performing at three different venues, the warm Bank holiday event proved to be a loud and messy event for all attendees as Saki, Yuffie and Hanako showcased their own unique performance style, their brand and - of course - their voices to a UK audience.