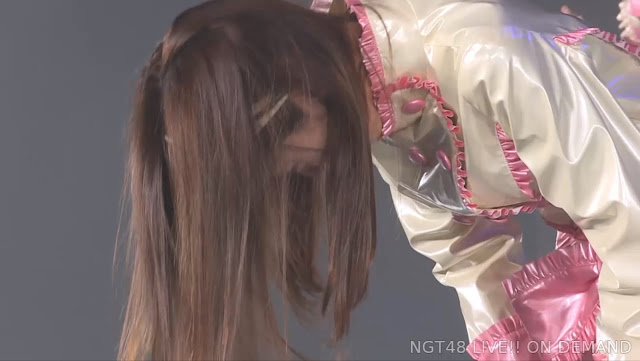 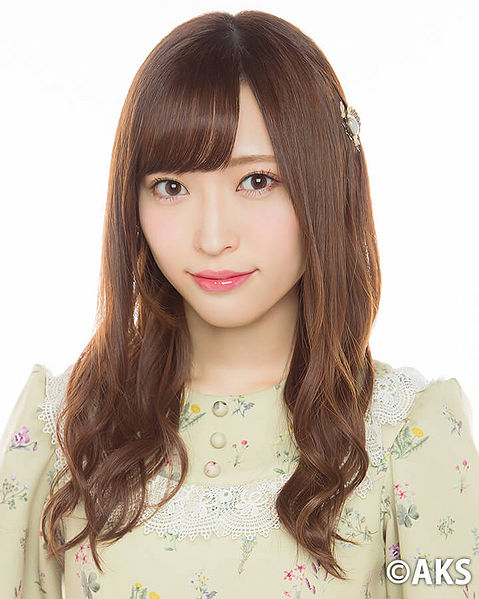 Now, I am no News blog or website who has to keep a certain filter when writing an article, nor am I a professional who has a set standard. I am an independent writer, and I have a very opinionated outlook on everything I watch, listen to and review, and whilst a lot of people might not like the lack of filter I hold, for once it will come in handy, because everything about this incident is messed up, and I am extremely disgusted.

For the past day, everything about this incident has been brewing inside of me. From the way it happened to the way it has been handled, the assault of Yamaguchi Maho makes me sick to my stomach. I feel like I can not think straight, so if my words come out jumbled or I make little to no sense, I apologise. I just feel so mad, and even after AKS and NGT48 management have spoken out about the incident on NGT48's official website, I still feel like nothing has been or will be done in regards to the safety and violation of Maho.

Everything has been handled so crudely, and this is just Maho's case. How many others have been swept under the rug and left unnoticed? The only reason why we know of Maho's assault is because she herself made it public, refusing to keep quiet after a month of hearing nothing, being forced to take a break from social networking days after her attack... we only knew about everything that has taken place because Maho herself - a public figure - chose to come forward for both NGT48 and herself. For that I commend her, but for management playing ignorant on this matter, I can only feel contempt, disgust and rage. 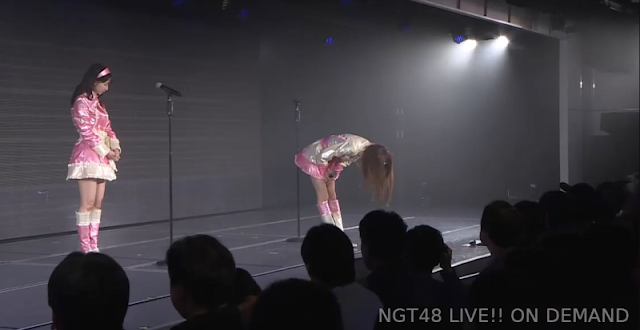 I just can't fathom how a company - a well-known, almost revered one at that, with too much money and probably the best security possible - can violate the safety of their members. I don't know how they can ignore the issues presented to them, or how they can turn a blind eye to the assault of one member, a girl who works hard to create happiness for her fans and others. I simply cannot fathom how a company can sweep everything under the rug and treat her like she is less than human and take the account of her attackers over hers.

There's so much I can not believe in regards to this issue. I feel at a complete loss for words when I found out that Maho's live stream was cut short to keep her from saying any more on the attack she experienced. I feel sick to my stomach knowing that she was made to apologise for daring to speak out, before bowing formally to everyone in the audience. I feel ashamed for her because they are only just getting down to the issue now, a month after she waited and waited for them to do something that they are only acting on now because she 'made a fuss' and spoke out because she is fearful not only for herself, but for the entire group of NGT48.

As idol fans we should be proud of Maho for stepping forward and taking a stance against her attackers and management, but as fans we must also act as her voice. She has been shut down from saying these kinds of things from her own management, but thankfully many fans have been calling for justice for her. Hopefully, Maho will receive the justice she deserves and hopefully she will see her attackers and whomever orchestrated this assault, member or not, punished accordingly, and not just a simple ban on visiting lives or a slap on the wrist. Maho deserves more than that, and she deserves to know that both her and NGT48's safety is priority.

Of course, NGT48's management have recently released a corporate, 'bullshit' statement (see below) in light of the situation, but I hope that even more can be done to further the safety of the members, not just for NGT48, but other members within AKS as well. 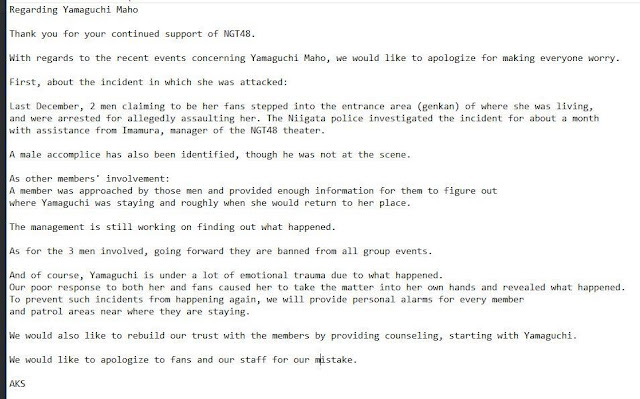 There could have been ways that management resolved this. They could have reported the assault to the media sooner, they could have made other fans aware of Maho's assault and protected her, but they didn't. Instead, management for NGT48 decided to hide everything by deleting tweets regarding the incident, shutting down Maho's live stream and forcing her to apologise for acting the way she should have. Instead of doing their job and protecting her, management decided to save their face and that of Yamaguchi Maho's attackers, and silence the victim in question.

Because of everything management has not done, Yamaguchi Maho is scared. She's lost weight, stressed and more, and right now I understand wholeheartedly why people - Western fans, mostly - are boycotting NGT48 and AKS until the situation has been fixed. I understand that this is something Maho does not want, and I hope that she is not blamed for any dwindling sales that may occur if they do occur, but I also understand that a lot of fans cannot support a company that does not prioritise the acts they promote.

Yamaguchi Maho may be one of many members, but she is still a human being, and she is precious. You should never prioritise the face of the company and shut down your members for the sake of making sure everything looks fine. By doing this you make your members suffer, and it seems like many members have chosen to stay back in order to save face for the group and management. That is not right.

Thankfully, Maho's plight has been heard, and not just by her fans of the Western fandom, but by other idols and former idols, too. Hopefully we can create a movement, and hopefully we can make a small change in all that is wrong with this mis-treatment of women everywhere. 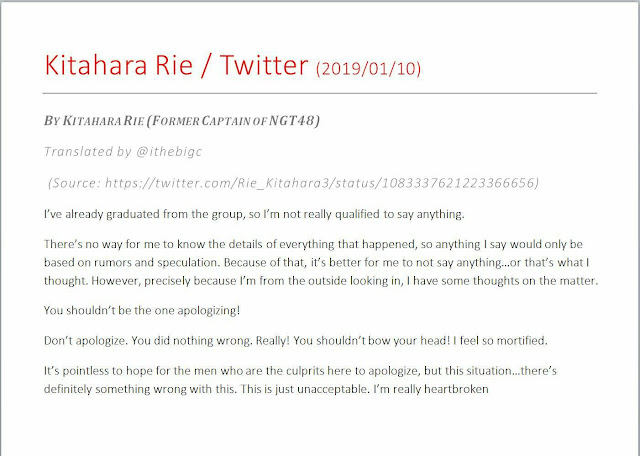 What has happened to Maho is one case of many, but Maho herself stood up and spoke out about it, and even when silenced she made people aware of her situation. Despite being a public figure, Maho is a victim who is being second-blamed for calling out her attackers and management during this nightmarish month she has been put through, and I hope that Maho's decision to be vocal will inspire others to be vocal, too. If even Maho's case has been swept under the rug by those who should be protecting her most - management, the authorities - then who else is suffering in complete silence because they have been blamed for attacks they experienced, too?

This is not just about justice for Maho, but justice for everyone. This is about not only protecting our idols, but everyone else within the world who feel they cannot speak out in case they are also blamed for being attacked, when it is never their fault.

This is a problem throughout the world - the UK, America, Europe, Japan, Korea, etc... - and it's a problem that will continue to stay a problem if people do not vocalise the issues or call out the authorities of their respective countries or fight for what they believe is right. What people are doing right now regarding the assault of Yamaguchi Maho is amazing, fans are collectively coming together and trying their best to speak about this issue, the disgust and sadness they feel and more. So much is happening, and hopefully we can reach enough people to make some sort of a difference, even if that difference is simply NGT48's management listening to the fans and deciding to do more than give members a 'personal alarm'.

Victim-blaming is a real issue, and Maho is one of many who have suffered this. Thankfully, she felt the need to speak out and make us all aware of it. AKS may have shut her down for making noise, but other people will continue to make that noise into an uproar. This may not be our country that we are fighting against, ad it certainly isn't our problem that we are talking about, but it's an issue we are shouldering to help someone who is trying to make their voice heard. So, let's make some noise for Maho and those who have suffered before this, and for those suffering now.

Thank you, everyone, for working together to make Maho's voice heard. Let's do our best to put a stop to this disgusting portrayal of victim-blaming, and let's fight for Maho's justice together.