[This Is Duu!], also known as [A Week with Duu], is a series of posts dedicated to Kudo Haruka and her impending graduation on December 11th 2017. It is a series that will look at the wonders of Duu, whether it is in the form of a music video, sketches, live performances or even her photo books! 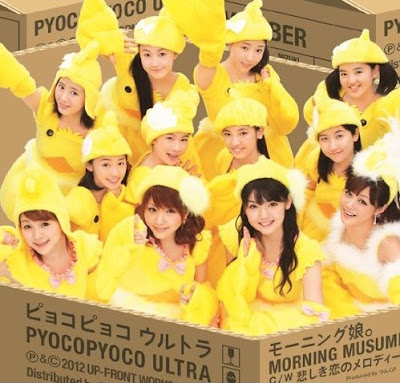 Okay, so this post might be a tad rushed, and that's because I have no time right now. December in general is a busy month, and by throwing in the Graduuation posts, I've only made it harder on myself. So, if I only do about three-four of these posts, (and not my usual seven) I duu apologise.

Kick-starting these posts is, of course, Duu's Debut. I was at war with myself about whether or not I should do Pyoko Pyoko Ultra for the first review, because whilst I love the song and video, it doesn't contain much of our dear Duu. In fact, it's a pretty shit debut for the freshly hatched 10ki, a thought I had even when the song came out. They get barely any lines, very little screen time, and Haruka herself isn't as present as I would like her to be. So, yeah. Shitty debut, for what is a pretty solid generation.

Then again, this was the Reina-Riho era of MM. You should kinda expect them > everyone else.

Well, it's good to look back at the origins of a member (even if Duu's origins were as an egg, but whatever) and returning to the debut of the 10th gen is always fun! After all, it's one of the last bright, energetic, childish endeavors the group did before becoming cool, awkward and mature. Sigh, those were the days.

It's time to look back, and it's time to remember Duu before she got tall, and before she cut her hair to the iconic hair-duu we know now. Let's reminisce, and take a good look at the cutest version of Duu. Are ya ready, kids? 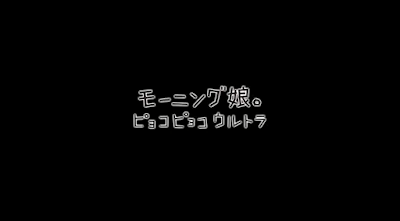 That background makes me so happy, and those freakin' costumes. I love how stupid they look.

Yo, this was awesome. I love how every little detail was well thought out for this video. 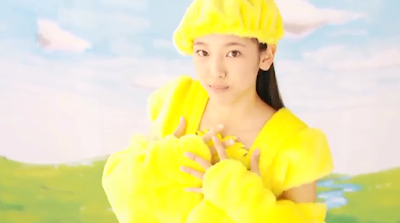 HARUNAN! Oh, gosh, you were such a fresh-faced cutie, back in the day!

... You still look the same, actually XD You should never change! <3

Masaki was adorable, but I really didn't think she had the ability to be an Idol when she was originally chosen. Oh, how wrong I was, guys.

Also, look at that projection! They actually did that! (And a lot of people thought it was shit).

Holy chicken suits, that is a close-up shot and a half o-O Feeling dramatic today, Editors? 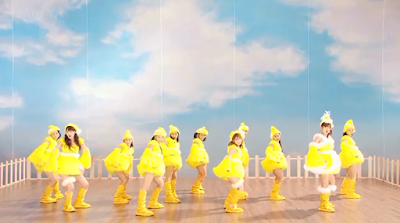 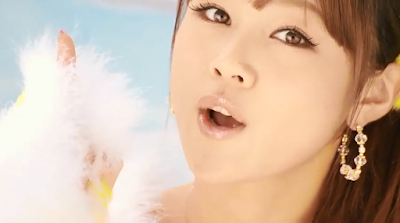 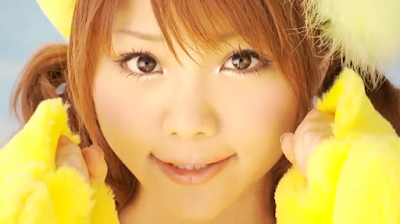 Oh, lord, we're so close to Reina at this point, I can see into her soul and guess what brand of glitter she uses.

Oh gosh, I forget that there were fragments of egg shell on these costumes. Oh, my days. Why didn't only 10ki get it? XD That would have made so much more sense, y'know!

Me need this spin in my life. Wheeeeeeeeeee~ 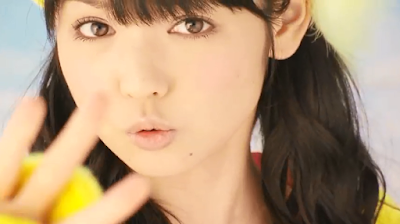 Sayu is a beauty, and this is the only time I will ever get close to her -sobs-

... Yeah, let's forget this horrible choice in choreography and cleanse our minds >o> 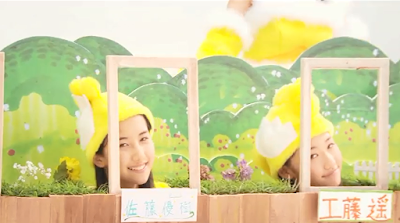 Those two are so darned cute. AND LOOK AT DUU, SHE'S A FREAKIN' FETUS!

That smile is strained, yo. Love that Gaki is cheering the kiddies on, though.

LOOK AT THIS BABY! She was so freakin' TINY!

Aika as a chick is probably the cutest thing since Sayu and Duu put together. My gawd, she's adorable!

And hey, look at that pan action! Mmmmm, nice and swift.

Damn, Riho was cute. Why did I dislike her again? Oh yeah... Idiocy and closed-mindedness~

Oh, Duu, don't pick a fight with Sharky. She will chomp ya alive!

I just love the practical effects used, and also, that dance. It is a lotta fun, if questionable at times.

Look at Zukki, being a silly wiggling baby XD 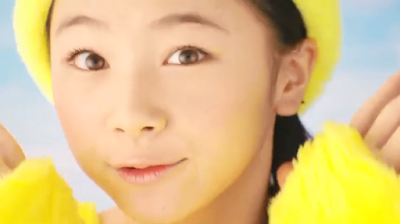 Shark-Daishi: "I will happily eat your soul, om nom nom~" 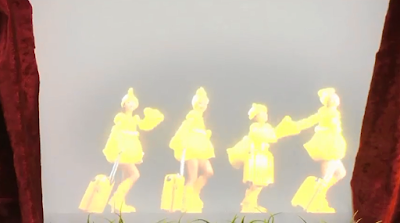 Potato has arrived! This is a cute, potato filled scene, isn't it?

TBH, I really love this part. Aika and Reina look delightful, and Aika is so in her cute element.

Harunan is such a freakin' delight, how was she not featured more?

Ahahahaha, please don't rain on Risa's parade! She loves being a leader! Not. 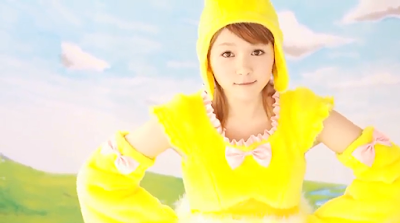 Risa is so freakin' gorgeous, I love her in this. She is hella charismatic, too <3

Damnit, this is the last solo shot of her >o> URRRRRRRRRRRGH!

Oh gosh, Aika, I freakin' love you. You were made for this song! 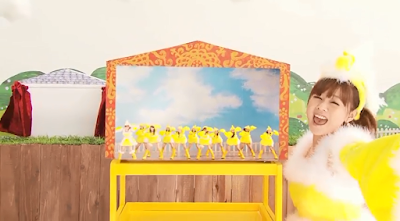 Gaki is so invested, isn't she? XD 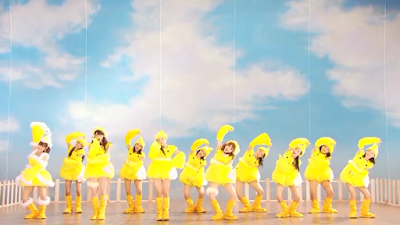 Masaki is half-arsing it in the back there XD Duu, however, is keeping it together. Such poise!

Oh, Lordeh, it just got cuter. Duu is so invested in dancing with Ayumi in the back there, too XD

Duu is trying so hard to get noticed, and I can't really blame her XD I mean, one, she's stuck in the back, and two... SHE'S HAD BARELY ANY SCREEN TIME D8<

She's had better screen time than Zukki, though; I counted, like, 1 solo shot? That's shitty, bruh :/

I just love how Gaki cheers Riho on with a smile, and Duu's there in the back like "Yeah, whatever, I need screen time."

She really wasn't impressed with this video, was she? XD

Oh, gosh, I do love how vivid this whole PV is, especially the dance shot.

Fave part of the dance, period. I had so much fun attempting this, before I realised I am a shit dancer XD

I kinda wish we had a close-up of the 10th gen, but whatever, I'll take Aika. I barely see her in most MV's, anyways XD

... Sigh, I hate rushing reviews. Ah, well. Time is totally not of the essence >o>

I reviewed this PV way back when, just after it was initially released in January 2012. I was hyperactive (as I warned), and of course, I thoroughly enjoyed the fun tone of the video. Turns out, I didn't like the projection effects back in 2012 - Ouch. I wasn't really aware of how difficult it was to do, however, and my opinion has since changed. Yes, it's cheesy at times, but it's nice that they use it. I mean, they tried, and the effort shows. That's all that matters.

Thinking about the PV as I am now, it is honestly one of my favourites. I mean, I'm still pissed that there is a giant lack of 10ki - it's their freaking debut - but, what little time they do have on-screen is pretty cute and fun. Duu is, of course, a delight to behold; she is charming, cute, fun and quirky, and even though there are times where she clearly looks a tad bored, she is still trying her hardest.

I think that, whilst this was definitely a bit of a weird video for Morning Musume at that time - straight-laced, liked some fun sometimes, but nothing overly weird and OTT as this (oops, Kare to Issho was a thing) - it wasn't something we as fans expected. It surprised us (it surprised Duu), and we weren't prepared for the over-exuberant delight that is PPU. We didn't even expect those costumes, and yes, we were floored by them... in the worst way possible.

But, despite the absolute goofiness that this PV delivered, it was still seriously cute. I love it, I think that the PV is downright fun and adorable. There is a lot of character thrown into this, and whilst it doesn't exactly define Duu's character as well as it does others - Gaki, Riho, Reina, Aika and Sayu - it does show off just how cute and charming each member could be, even if a certain member didn't necessarily want to be a part of something so cheesy and cute. Like, Duu is great here - she might not like what she has to wear, but she's getting on with it, because it's the job she's been tasked to do.

Duu is fine here, but she's not exactly standing out, and that's because she wasn't given enough time to stick in our minds. What little screen time she did have, however, she milked, and she made sure she shined. Little waves, smiles and her trying her darndest to be noticed from the back make this debut of Duu worthwhile to see, though I do wish she was included in the final edit more. After all, she has the charisma to pull off being a cute, fluffy animal, even when she doesn't want to be that animal.

I love the PV, but it lacks Duu. I really had to look for her in this one, but when I found her, she was delightful. I guess that's what we gotta do, sometimes: Look for our beloved's, and squee when their snippet appearance proves to be better than we could ever imagine.

Until the next Duu-tastic post, people, I will have to bid you A-duu. Take care, and love your DUU!