predia week meets its fourth day, where we take a look back at the groups major debut single, Kowareta Ai no Hate ni! Though the members of predia might sing about a broken love, let's enjoy this single release as much as we have in previous reviews, and cherish the beauty of their song.

Even when our eyes are filled with tears and mirrored fragments settle by our feet, let's find a beauty that lurks deep within this sadness and regret... 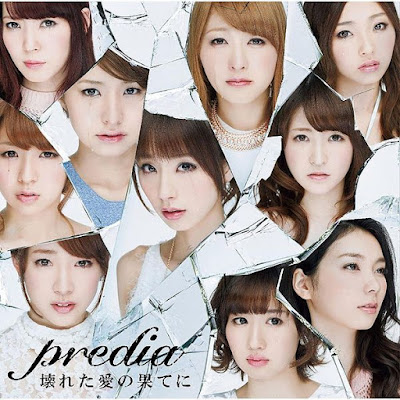 Okay, so I have technically reviewed Kowareta Ai no Hate ni already; I checked the song out on day one of my predia week reviews, because it was #11 on the Dahlia album, and yeah, I liked it then and there. Thing is, listening to a song on an album feels different to listening to it alone, because on an album, a song is swamped by the others - you hear so many, and one little ditty can get lost in the fray - yet in a single, it can stand out. So, there's a difference there... sorta.

That's how I see it, and that's my opinion. I'm sticking to it, no matter how weird it might sound. Ha.

I guess I could have easily switched this song out, like I did with Utsukushiki Kodoku Tachi when I saw I was going to be reviewing it three times, however I wanted to give this one a go, because, you never know; I could begin to like it a lot more in its single form, plus, I can give it more a little more focus than I did in the album review.

... Looking back, however, I kind of gave that song a great amount of focus. Still, though, this single has a b-side attached to it I hadn't heard yet, and that very b-side contains the word Cinderella in its title. I will review it, damnit, for the sake of potential fairy tale antics and happiness! Roar!

So, following the list my dear Ashley sent me with some dedication, today we take a look at the major debut single from predia for predia week! It's time to experience the start of the predia we know today. I wonder, will they disappoint, or only allow me to fall further in love with them after this review is over...? 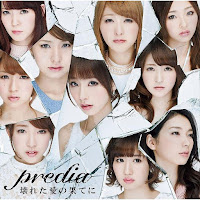 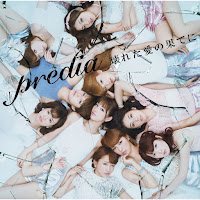 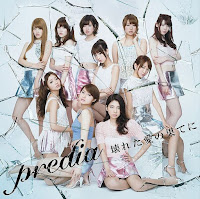 Okay, so even after the album review and days of not listening to this song, I can safely say that, yes, I still like it. It's a great song, honestly, with a wonderful amount of maturity and a fun sound. The opening still amazes me every time I start the song, standing out against the rest of the music I've already heard from the group. It's such a damn catchy song in general, though, and proves to get better every time I put it on.

Actually, when I first put the single on for a listen, I felt quite excited that it was this song again, from the album I had already reviewed. So, it's definitely a memorable one, given my positive reaction to it once I heard that opening track again.

Now that I know the song is from their major debut single, though, I think that Kowareta Ai no Hate ni set out a promising sound and future for predia. It delivers a strong tune, great vocals, and a fun yet melancholy feel to it that is also mature, and a little bit sexy when it needs to be. It's well done, and I genuinely enjoy this song from beginning to end. I get why something so strong and enjoyable was chosen for their major debut A-side.

Looking back at the music video, I want to say that, honestly, I'm quite glad my dearest Ashley didn't choose this as pone of the PV's she wanted me to review. It's not my flavour of crisps, and honestly, it just feels forced, and unnecessary, like they're trying their best to drive home this 'sexy' image, when they really don't have to. It doesn't fit the song that well either, if you ask me, and just doesn't appeal to me in any way.

It has some nice filters in it, however!

I'm pretty much in the same mind about the song and PV as I was in the album review for Koko no Dahlia ni Kuchizake wo; the song is great, and I highly recommend it. Kowarete Ai no Hate ni was the starting point for predia in their journey as major idols, and they came in strong with this A-side track. Sadly, the PV ruins it ever so slightly, so if you're not one for sexy PV's that feel like they are there simply to deliver sexual gratification, instead of because it fits the song or style of music (really though, this song doesn't needany  'sexy' imagery to keep it interesting), then definitely listen to this song alone. It's strong and entertaining enough, and certainly keeps interest.

This isn't AKS, iDOL STREET or H!P, guys; predia can actually hold their own in sound. Trust me!

... Okay, I admit, I'm not the biggest fan of this track, and that is a damn shame. A shame because, 1) Cinderella is in the title, and 2) I've not really disliked or even dismissed a track by predia yet, and this one is, admittedly, the first that just feels completely forgettable. Unlike Maboroshi Ha Zanadu or Voyage, which have bland openings but great choruses, this song is just... meh. It's meh, and I dismiss it completely once it ends. Then it starts up again, and for the life of me, I can't ever remember how it goes, even when I have listened to it on a loop already.

It is so utterly forgettable, and so far, one of the blandest tracks from predia I have heard yet, which is, again, a damn shame. They've held so much promise, thus far. -cries-

Still, this isn't a horrible track, either. I'm pretty sure this one has its fans, and that it sounds great live (actually, I hate how it sounds live, more; I've listened, and I turned it off after a few bars - I cannot stand it), however, I'm not this songs target audience. Yes, it's a dance track, and good grief, I like one of the verses - from 00:51 until 1:05 - but, I just can't get into Bokyaku no Cinderella's sound. It tires me out, it makes me feel sluggish, and it does very little for me. It is what it is.

Realistically, I can't enjoy every song predia throw at me - that would be a miracle, and I'd probably be considered biased, or blind to their faults - so, it was only a matter of time until I finally found a song that I didn't like from them. This one happens to be it, and I embrace that. Still, it's a shame it's from their major debut single, and that it was their Cinderella track. Ah, well.

It's always difficult to figure out a singles rating, because you're pretty much judging the release by two songs, and maybe even the PV, depending. Well, after hearing Bokyaku no Cinderella, I had a very strong idea of the rating I would give this single, and also, I'm keeping the PV in mind for this one, too. Already, you might have a good idea of where this is going. Lol

I love Kowareta Ai no Hate ni as a song. It has a vivid, strong sound that has a melancholy tune, as well as some parts that are indeed sexy and mature, and a very memorable dance beat that is infectious, and begs for a continuous loop and replay. It's a glorious track, and honestly, I'm a little bit sad that the accompanying PV is what it is. This song may have some sexiness to it, but it's honestly quite subtle (aside from the opening dialogue), and it sounds mature and melancholy throughout. So, for me, the music video simply ruins the tone and feel of the song, only managing to cheapen the quality of predia's music, which is a sad thought.

The b-side isn't my cup of tea, either, and just doesn't sit well with me as a track. I can't help that, really, because we all have our own thoughts on what we enjoy. So, whilst I'm pretty sure some listeners will really enjoy Bokyaku no Cinderella, it's honestly just not for me. I'm just going to let the song pass, skip it whenever it comes on, and forget it even exists.

This is the lowest rating I've given to the group yet, with only two and a half stars out of five. It's a terrible rating. I know, but the music video and b-side just really disappointed me for this release, making it one of the weakest I've heard from predia, yet. I'm sad, but, hey, this is how it has to be. I don't think any less of predia, however, because about 97% of what I have heard already has entertained and delighted me, and I look forward to more from them in the future. Sadly, it was their major debut single that has fallen a little from this high pedestal they have sat on up til now. Maybe next time, they will hoist themselves back up from this little setback, eh?

If you have already listened to Kowareta Ai no Hate ni, what are your thoughts on the single, and which song is your favourite? Do you agree or disagree with me on the quality of Bokyaku no Cinderella or the accompanying PV for the A-side song? Whatever your thoughts, let me know and share with others your thoughts on predia!

For now, however, I will have to bid you adieu. Hopefully you are all enjoying predia week as it trots along, as well as any other Idol music you might find in your journey of the Idols!

Until next time, everyone, please take care of yourselves, enjoy the music, keep smiling, stay happy and, of course LOVE your Idols!