A Duo Generation! The 13th Gen of MoMusu is Here!

With their 2016 Autumn Tour Final, and after many failed auditions (gee, thanks, H!P...), Morning Musume '16 finally made the announcement for their new 13th generation members, and surprised the audience with the decision of just who would grace the stage, single covers, magazine spreads and PV's in the year too come. 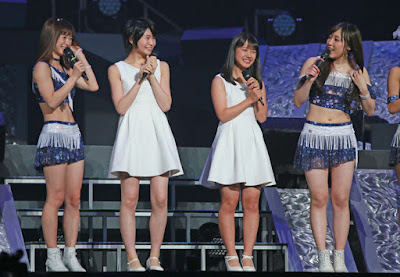 BITCH, YASSSSSSS, IT'S A DUO GENERATION!

When has there ever been a Duo Generation in MM!? None, that's what, and I'm not counting the duo debut of Linlin and Junjun, because they were a part of the 8th generation. Sooooo, this is a first! Thanks for actually making the 13th generation up the member count to 13 members, all together! I'm pretty happy with that!

Also, weirdly, I got my silent wish for another short cut member! Turns out it's the very member I said would fit better in Juice=Juice, but ehhhhh, that's all in the past! Right about now, I am positively delighted by the decision made, because, gaaaaaaaaaaaah, a new generation!

My current meh feelings towards MM do not stop my excitement from spilling over whenever a new generation is announced. I'm still a dork for things like this, and also, MM has a place in my heart, regardless of how much they might flail thanks to poor choices made by Management. Hopefully, that will all change come the new year. Let us pray!

ANYWHOOOO, let's take a look at the members before I squee, and THEN we can talk! Bring on the pictures! 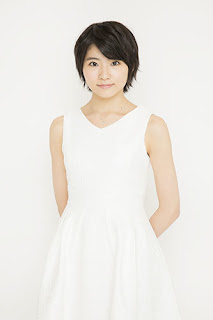 After (basically) failing the 11th generation audition for Morning Musume back in 2012, Kaede joined the Hello Pro Kenshuusei back in November that same year, simply because she did not want to give up on her dream. She also participated in the 12th generation audition, but has expressed her desire to debut in Morning Musume regardless, and to potentially become an ace. Until now, Kaede was the longest serving Kenshuusei member (of the current lineup) who was not tied to a group.

She has experience in Kendo, aspires to be an actress, has appeared in four Theatre works under the Hello! Project banner, and has a speciality in the trumpet.

Her motto is: 何事も尽きるまで! (Do everything until the end!)

Okay, so firstly, I originally stated in my 13th generation Speculations that, for Kaede, I felt she was better suited to Juice=Juice, but honestly... I'm happy. I'm really happy, because they added a girl with experience and flare into the mix, someone who might even force the older generations to think a bit, and work harder. There is no denying that Kaede is well liked, both by the fans and the other members within Hello! Project as a whole, so I'm glad to see someone who has the support of everyone make it into the flagship group. But, I really do hope that Kaede herself or the others don't let their friendships from stopping a competition brewing between members, because I think Kaede can do it. I really do.

I was pleasantly surprised by her addition, and again, I'm happy to see her in the group, because whilst I don't follow the Kenshuusei, I know many have wished and hoped for her debut. She looks to be a great asset already, and, plus! SHE'S 17! This means she is already older than two of her seniors, and that freakin' delights me! Muahahaha!

Because it's Kaede, and because she has this mature, almost regal look to her, as well as a quality feel, I think that she might inherit the colour Red. I can kinda see it, and I hope that this is the case! 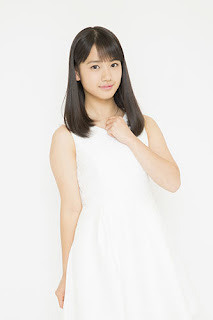 A newbie, Reina joined Hello Pro Kenshuusei just this year, and has only had around 3~4 months worth of training since coming into the entertainment industry. Though she has little experience in the entertainment world, it seems that Reina herself enjoys playing instruments, and can play the piano, as well as the alto sax (of which she played in her middle school brass band), as well as others, it seems. So far, she has performed only in one theatre production with Hello! Project, Nega Poji Poji.

Originally, Reina auditioned for the 13th generation of Morning Musume from January until June this year, and though she made it to the third round, she was not successful, and instead came to join the Hello Pro Kenshuusei.

Her motto is: 時間を大切に！ (Time is important!)

Ehhh, she's so pretty, and her smile is absolutely breath-taking! I didn't expect someone so adorable to come into Morning Musume! And, she's 15 years old! She's older than Akane, for sure, but she is still younger than Maria, but only by 20 days. I'm actually seriously happy a relatively unknown, new Kenshuusei has come in, because whilst I definitely wanted someone seasoned and ready to compete with the current lineup, I also do think an air of freshness is needed.

Also, I find it a bit ironic that 13th generation candidate from the earlier auditions became a 13th gen member. Funny how things pan out, HUH, H!P!?

For now, as I don't know much about Reina as a performer, I think she might definitely be one of the good-looking members, someone who may get a bit of screen time. She certainly has this graceful appeal to her, but, she might be surprising, too. Given one of her hobbies is dancing, I do hope she is someone who is strong in that aspect, and can keep the current lineup on their toes. Likewise, I hope she is someone who still needs growth, because we have Kaede as the clear bread-winner of the generation right now, but it would be nice to Reina as a performer and a person grow and get better with each performance.

Right now, I'm a little unsure of Reina's colour. I originally intended to say Zukki's green, because she does feel green, but there's this air of freshness that surrounds her, and she feels like a light colour. If she gets a Light Green, I really wouldn't be opposed... Actually, she reminds me of a Mint. Fresh, but there is a strength beneath that layer of freshness you don't anticipate. 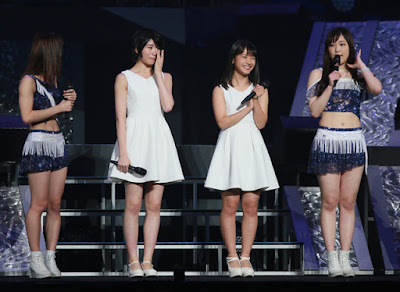 Despite the fact I'm not heavily into Morning Musume or Hello! Project right now, I do hope that someone like Kaede or Reina can spike my interest again. Both girls look positively wonderful, and I feel like - if H!P let them - they could easily be game changers, and aid MoMusu more than hinder it. After 12th generation were pretty much left to fester until this year, I do think that Management should learn from their mistakes, and make sure to utilise the two girls they have chosen for the 13th generation, especially Kaede. 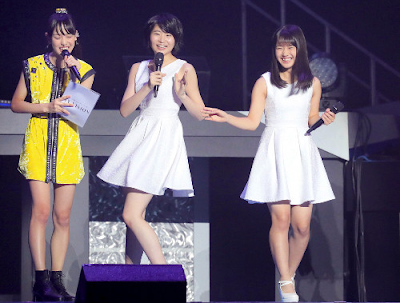 The results of the 13th generation members is a good one, I think. They have brought the member count to 13 - something I did want, because I like when these things happen, and because my lucky number is 13 - and they seem to have balanced out experience with freshness by making use of a seasoned, well-loved Kenshuusei, and someone new who might be a surprise in the long run.

Another thing I am happy about, in terms of who they have chosen, is the ages of the girls picked. Both Kaede and Reina are older, and whilst Management could have easily chosen a 12 and 13 year old for the group, I feel like they really put their heads together, and chose the members they felt could bring something to MoMusu, and also, members who could perform at night as well as in the day.

Plus, with their mature and cool look they are trying their best to apply, I feel like a younger teen would not bring that. So, I feel like Kaede and Reina were good picks. Their ages, too, allow them room to grow, whilst also still allowing them to feel mature enough. 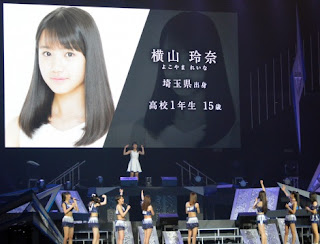 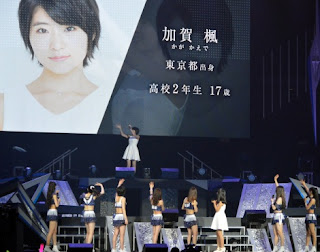 I think this is an announcement that has - and will - please many fans to come. I've yet to see many reactions to this, but honestly, I'm feeling positive about this outcome already, and this is from someone whose own love for Morning Musume has waned considerably. I just hope that both Kaede and Reina get a decent debut song, and that they have a solo or two in there.

I look forward to seeing these two in action come the new year. With 2017 on its way, I do hope that this shows the start of a new era, and a great new generation for Morning Musume '16. Are you ready to watch these Idols debut and show their skills? 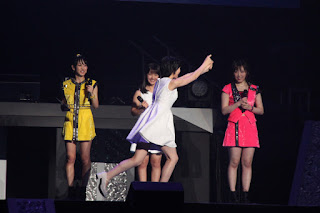 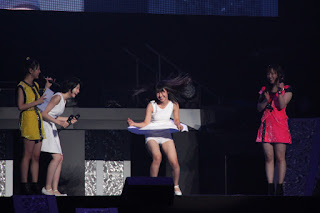 What are your thoughts on the new generation, and do you have a favourite? Are you anticipating the new Morning Musume for 2017? Let me know, and share your thoughts and feelings with the world!

Take care everyone, love your Idols, and stay happy.