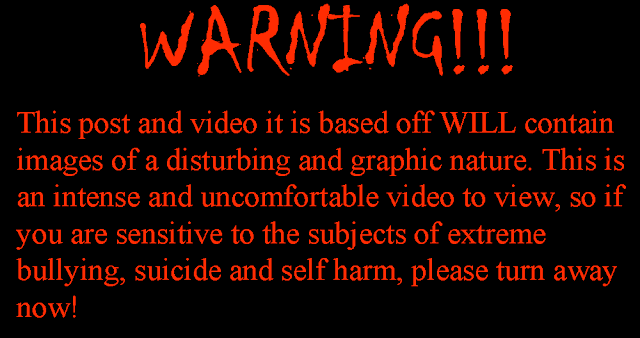 All thoughts and opinions are simply my own. That is how it works here.

For my first Music Video Review of 2016, we're going to tackle a dark and emotional subject. Reader and Viewer discretion is advised. 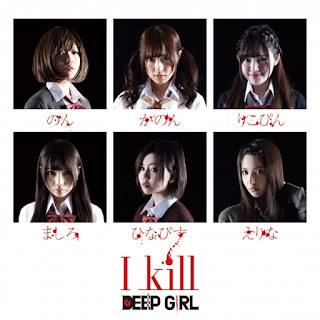 I Kill is only the second single release from DEEP GIRL. A Rock-Idol unit who debuted just last year, these girls have their own TV show (DEEP GIRL), and are already tackling some of the worlds leading issues head on: Bullying, self-harm and suicide. There will be at least one topic here that we familiarise with, and yes, this will get personal.

It is a heavy topic to think and write about, so if you feel uncomfortable with such things, please do leave this post now. Thank you.

This Music Video is intense. It's dark and gritty, the topics that it deals with are issues that are prevalent not only in Japan, but around the world, and it is emotional to watch. The cinematography captures the essence of this video in a way that is beautifully cold. It's eerie. It's disturbing.

This entire video unsettles me.

Now, I see this video from two stand points: I look at as a critical reviewer, and then I look at it from a personal stand point; it is from viewing it in a personal way that I find myself unsettled, sick and relating to it.

We've all been bullied in some way or other, and though our own experiences may not have been as intense as this video depicts, please be aware that the extreme bullying displayed within this video does exist and that if you or anyone else is being bullied, whether it is emotional, verbal, physical or social, you should tell someone about it.

Bullying can ruin lives, even if it's a small amount of bullying, so please don't keep quiet about it, whether it is you or a friend. Speak up, because it can help, if only just a little.

This video deals with quite a few aspects of bullying; verbal, physical and social media bullying are prominent themes in this video. Mashiro Shiyo, the victim, is abused by her classmates to the extent where she can no longer take it, and decides that suicide is the only option.

They kick and hit her, sometimes with the aid of baseball bats in certain segments of the video, throw buckets of water over her head, push her head into the toilet, send her messages calling her fat or telling her to disappear, as well as talking about her behind her back or when she is there. She is isolated, and like a lot of bullying victims, she feels she can't tell anyone about what is happening to her.

Eventually, Mashiro comes to hate herself, and as shown in one pivotal scene towards the final act. There, she herself tries to cut ties from the life she leads.

The shots and editing for this video are pretty disorientating to watch, echoing the iconic film noir style. Shaky cam, high and low angle shots create a sense of discomfort for the viewer, especially during scenes in the bathroom and when Mashiro is being beat up. Slow pan shots during spoken scenes create that serious tone, whilst fast cuts in editing during sequences of bullying and the death of the character can bring forth the intensity of the videos subject matter, as well as bringing forth that feeling of a sickening rush Mashiro would be feeling as the victim.

Lighting is a key focus, too, with high contrasts, dark shadows and swinging lights that disturb the viewers, as well as distressing and disrupting the scenes flow. It's effective in not only setting the videos tone, but also creating that feeling of discomfort, pessimism and fear.

Even the mis-en-scene speaks volumes for the video, such as the scene shown above where Mashiro is depicted in the classroom, alone. It speaks for her feeling of isolation, because even in a classroom full of students, she is alone.

Another aspect of this video that only enhances how disturbing and dark it is is the music; I Kill is a type of music that I have not really heard yet in Japanese songs, however its use of rhythmic dialogue mixed with singing creates a tone that is unsettling in many ways. The tones of voice used here further enhance that level of disruption the song hopes to create; the gleeful taunts of the bullies, Mashiro's shaken cries, lowered voices rising, overlapping vocals, distorted and echoed speech... it all enables the song to become a more emotionally driven piece that personally scares me.

The fact it is just as eerie as the video is really makes it stand out, if you ask me.

In both look and sound, this is a very thought provoking video that many can and will relate to, but it also has a message, one that is shown at the end; there is still hope for your future, even if something like this is happening to you.

This song and video was created with the hopes that it would become someone's salvation, and DEEP GIRL as a whole would like for it to reach many people so that they are aware they do not need to hurt themselves or end a life because of bullies.

It is one of the hardest things, being bullied. The torment others cause can lead us to do things we do not want to do, and sometimes our pain is spoken not through words, but the scars we create on our bodies. It's a never ending cycle of emotion, because we hate ourselves, we want to let the pain out, we want to feel something to prove even to ourselves that we are human.

And nothing is said because there are times where society tells us to shut up and put up. There are teachers and bosses who ignore bullying, some parents do, too. Sometimes our friends are suffering it alongside us.
And sometimes it's our friends, teachers, bosses and families who are doing the bullying, and when the people you trust do it to you, you really feel like there is no one to talk to, or anywhere to run.

This video speaks to all who are being bullied, and I hope that it reaches those who have or are being hurt. Though this video does show all the horrible things that are happening to Mashiro, please look at the end and know this; you have a future, and you are just as much wanted in this life as others are. Don't let bullies dictate your lives.

But that's easier said than done, because bullying scars you, and sometimes we can't handle it. Bullying can destroy not only our school and work lives, but also our social lives and how we interact with others, and for many it can cause mental grief that leads to depression, anxiety, trust issues and more.

Not all of our scars are found on the surface.

It's hard to say 'you can fight this' or that 'the bullies will go away eventually' because let's be real; they will plague you for the rest of the life. Yes, these people will disappear from your life eventually, but the emotional and mental trauma is still there. The scars on arms, legs, necks and stomachs heal but won't go away, and the fear you feel when someone is laughing in a crowd will never go away. It is always there, and whilst we move away from it as we grow older, it still affects us no matter how many times someone tells us to 'get over it'.

Much like the images above show, we want to separate ourselves from a life of being bullied. We don't want to be that person, and we don't want to feel that pain any more. Sometimes it gets to a point where we can't take it any more, and one of us will do something that can never be undone.

What we need more than anything is more help with bullying in every country, and for it to feel socially acceptable to speak out. Bottling everything up doesn't help us any, you know; it just manifests into something worse.

I don't want to be alive any more.

There's no use in people saying you should speak out if they're only going to tell you to 'get over it' or 'ignore the bullies'. It doesn't work like that at all. Don't shut a person out if you're going to suggest help.

It's hard, but please, get through this. I know there doesn't seem to be an exit from the Hell you feel, but there will be. Run away, fight back, talk to someone, change schools or work... anything, because it can all lead you to a better future. You can be happy again, it just takes time.

It took me nearly 6 years to feel completely happy again. I have anxiety and whenever people laugh in the streets or in class, I want to cry and run away, but I can say this with confidence; it's better now. We as people can never leave this behind, it runs too deep for that, but what we can do is look for a better way of living, and to try and talk to someone who you are sure can help you.

Friends. Maybe a teacher. Parents. Siblings... someone. Please, just talk to them, and get the help you deserve. Don't let bullying push you to doing something that can never be reversed. You're so much better than they are, and you deserve a future just as much as the next person.

And if bullying is happening around you, don't ignore it: Help them. We all need to fight this, and we can't do that if it is being ignored.

DEEP GIRL's I Kill is a video that we don't always see in the world of Japanese entertainment. Yes, it's a topic that has been touched on previously, with AKB48's own Keibutsu Shiteita Aijou as one of the most well known videos relating to the topic of bullying and suicide, but this is a topic that we do not always see within the world of Idols, and I do believe that it needs to be talked about and shown more.
I can only hope that, in the future, more groups take a step in this risky but needed direction and emulate both AKB48 and DEEP GIRL, because though violent and upsetting, these kinds of videos reveal more to us than we think, and I do believe that by showing us these kinds of videos, more people can be made aware of how badly bullying affects people.

If you or someone else is being bullied or abused, you suffer from self harm or depression, or you are feeling suicidal, please look for help! It isn't weak, you aren't being a coward, and you certainly are not running away! You are looking out for yourself, and that should always be a persons #1 priority.

If you cannot find any personal help, please look online or call someone. Don't let this get out of hand any more than it may already have done.

Please don't stay quiet, because your words are worth far more than you realise, and yes, they can save you.