All thoughts and opinions typed within these blogging walls are my own. I don't expect others to follow or like what I say, and I would hope someone would not find offense in my words. I try not to hate, I simply try to critique to the best of my abilities. Yet, if you dislike what is said, you know... you don't have to read it, right? That is all, for now...

Whilst rummaging through music files to look at what songs have come out this year for a list I am compiling, I happened to stumble across a mini-album that I had, admittedly, listened to once or twice, only to forget about it thereafter.

And now that I have listened to it once again again, I think that it's time for a little review, don't you? 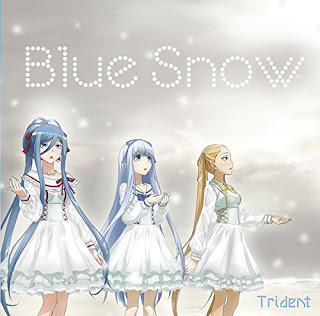 Trident is a group that I am rather unfamiliar with, one that I found simply by stumbling across a music video of theirs for this very mini-album that they released back in January of this year. I remember enjoying it and wanting to hear the rest of the songs that were included, and I eventually did come across the mini-album itself, but after those few listens... well, I obviously ceased listening to them and forgot that this release even existed.
By chance, I just so happened to find it again and thought to listen to it, wondering what it sounded like.


My immediate thought after listening to the first three songs; why, and how, did I ever forget you? 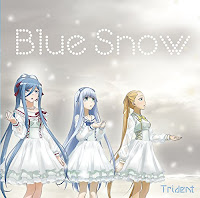 The first mini-album from seiyuu trio Trident, Blue Snow is the groups first release since their debut single Purest Blue back in June 2013, as well as their first mini-album. Made up of seven songs, Blue Snow includes three tracks from Trident, as well as a solo song from each of the members. Included is a bonus track from Blue Steels, the groups male counterpart. Both groups sing for the anime series Aoki Hagane no Arpeggio ~Ars Nova~, of which they also act in. It is this anime that created the group, in fact.

I found out about Blue Snow by complete accident of course, however I was completely enchanted by their title song back in 2014 when I was looking for PV's that were Christmas or winter themed, and whilst I never actually used this one for a review, it struck a chord with me. Eventually I found the album after some time, and I listened. I then went on to forget about it.

After listening to it for the first time in about half a year, I've realised just how much I actually like this mini-album. It's fun, there is variety in what you hear, and I find the members of Trident have some really nice pipes on them. One is probably a bit too squeaky, however nothing too annoying or downright terrible that would make me bail. I like their vocals, and I like how they sound together. They're a good trio, but even solo, they stand on their own well.

I actually like that we get some solo songs thrown in here - my favourite happens to be Engage, because it has one hardcore opening in my opinion - as it gives us a chance to hear the girls individually and measure their strengths in singing, to see what sort of songs they are going to sing and what matches their vocals. Engage, of them all, is by far the most powerful song, and Numakura Manami is a fantastic choice for this kind of song. Sure, she doesn't have the most powerful of vocals, but she sounds amazing regardless.

Regarding the title song that started it all, Blue Snow really is a good track. I enjoy it greatly and think that it is such a beautiful sounding winter song. It makes me think of walking in the snow, watching snow fall, and of course, winter when it begins... and then it becomes this upbeat track once the opening is over and done with, and I feel like I'm in the club. It's enchanting, really, and I think this track is on par with Engage for me. It's fun to listen to, and it makes me think of Christmas, despite the fact we're still in the summer season.

The one surprise from this entire album though was the bonus track from Blue Steels; I had not expected a male group to be a part of this mini-album, however, the surprise of it all was pleasant. Arpeggio is beautiful, and I have been completely charmed by the guys singing it. Despite focusing primarily on female Idols, I am indeed a sucker for male singers - their voices are gorgeous, okay, and listening to Blue Steels is magical, in a way. I'm completely infatuated, not just with Arpeggio, but with this entire mini-album.

Let's pray that I don't forget it again, okay?

Blue Snow is a fun mini-album, and I find it a shame that I forgot it as quickly as I did, because it has some songs in it that I think may become favourites of mine in the near future. There is a variety of tracks here and they all sound great. Of course some will stand out above others, however I still think that the mini-album itself is a strong one and that each song has its own charm and hook that will grip the listener. It's well done, and I think it's great. What else can I say?

I have thoroughly enjoyed Blue Snow and I am happy that I took the chance to look at it again and realise how amazing it is. I do remember listening to all of these songs and loving them, and returning to them after so long seems to have made me appreciate the beauty of Blue Snow even more. It's simply wonderful, and I have to say, it has really cooled me off with the heat of the Summer songs and PV's we have received this year already.

If you have not checked it out already, give Trident's Blue Snow a try, and hopefully you may find that you enjoy it just as much as I do! It's a nice little set of songs, and whilst they are indeed perfect for the winter season, they still work wonderfully for the summer time, or any other season, as well!

I give this mini-album a hearty 4 stars out of five, because it's just so good!

If you have ever heard of Trident and their songs, what are your thoughts on them? Are you also into seiyuu groups, or aren't you? Be sure to leave your thoughts below, I would love to hear them! If you have any suggestions, too, leave them in the comments for me!

Until next time though, please take care, keep happy and lively, and have fun loving Idols and the music that they create! MWAH!