Life Updated: I Have Another Nephew!!! (+ other things)

You know, my family really can't keep it in their pants, can they? Not that I care; I like little sprogs! 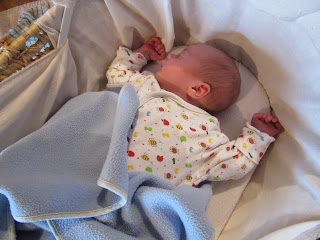 On April 24th, 2015, just 15 minutes before midnight could strike to the next day, my latest baby nephew, Loki (no I am not kidding), was born unto the world! So, little one, welcome!

Not gonna lie, though, he is the most alien-looking of the three recent babies in this family, however when he opens his eyes he so darned cute, and yes, I do love him! He sounds a bit like an annoying cat when crying, but whatever... adorable! And tiny! And really big eyes right now! SQUEEEE!!!

As of right now, Loki is my fourth blood-related nephew, and the third son of my second oldest sister (and also her last child, as she has expressed that she won't be having any more after Loki). He's barely a year younger than his brother Damien, who recently celebrated his first birthday actually, and is almost 17 years younger than his oldest brother! WHOA! So, yeah, he's a titch in this family!

To be honest, I kinda can't wait until he starts acknowledging people and realising I'm the nutty aunt he can kinda take advantage of (as both Annie and Damien kinda do already, especially Annie).

Oh, and regarding Loki's name; he is actually named after the Norse God, Loki, and not the Avenger's character that is also named Loki - **to clarify; my sister wanted to give her son a name with meaning behind it, and also to be a bit unique in a sense; she didn't want to simply name him after a character from some film she once watched. She likes mythology, too, so that helped.
That said, wouldn't it be hilarious if, one day, baby Loki met a baby Thor during playtime in school? Yes, that would be AWESOME!!! Says the girl who refuses to watch The Avengers series, period.

Anyways, I do want to apologise for this late life update; I have been busy with assignments and a few issues with next year's house-mates in University life, so an important update like my latest nephew's birth had to be put on hold, as well as blogging in general. Now, however, I have actually finished my first year of University, and will be on Summer break!

Currently, I am visiting my family, mostly to see Loki for the first time, as well as to do the mandatory voting for our government (urgh, don't get me started), and also just to relax, which is hard to do in such a busy house, and also, I have been demanded to play some old-school Spyro for Annie as of late, as I made the mistake of showing her that I knew how to play it. Oops.

Still, it's nice to be home, to see the youngest nephews, youngest niece, one of the older nephews, the parents and older siblings, and to basically be home in the countryside. I mean, I knew I was really back today; I smelt freshly mown grass for the first time in ages, and honestly, that's something you don't often get in the city. So yeah, it was refreshing.

Well, until the next post (which I hope will be soon), I will have to say toodle-pip!

Take care, and much love,
Chiima~

** To anyone be thinking I didn't know Loki of Avengers was loosely adapted from Loki of the Norse God variety. I like reading things, I can research - yes, I know that Loki of the Marvel variety is taken from that one Norse God Loki. Don't worry, I'm not that stupid, even if I act that stupid.
Posted by Chiima at 19:26