All thoughts and opinions, and rants, are my own. Y'all have been warned. THANKS!

I'm pretty sure that, by now, everyone has heard the news already:

So why am I feeling slightly irritated? 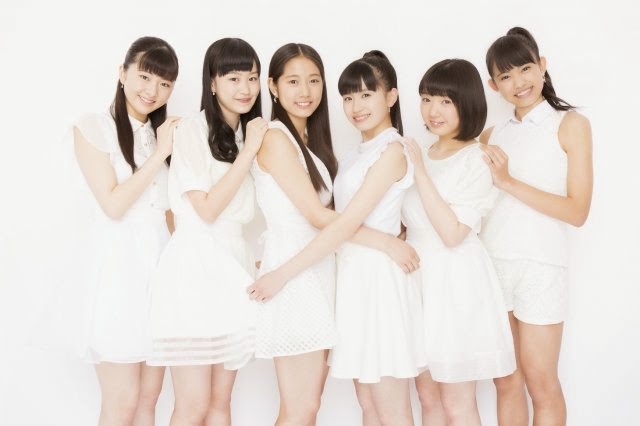 I doubt I need to give any introductions to this group, as I am pretty sure you all already know about them, but please say a warm hello to Tsubaki Factory, the newest in new from Hello! Project! Hand-picked and named by Shimizu Saki (why am I not surprised?), these girls are the latest group to emerge from the pool of talent that is the Kenshuusei!

Currently consisting of six members, the girls within the group are: Ogata Risa (16), Yamagishi Riko (16), Niinuma Kisora (15), Tanimoto Ami (15), Kishimoto Yumeno (15) and Asakura Kiki (14), and they will all debut as Tsubaki Factory on May 4th during the next Hello! Pro Kenshuusei live concert. 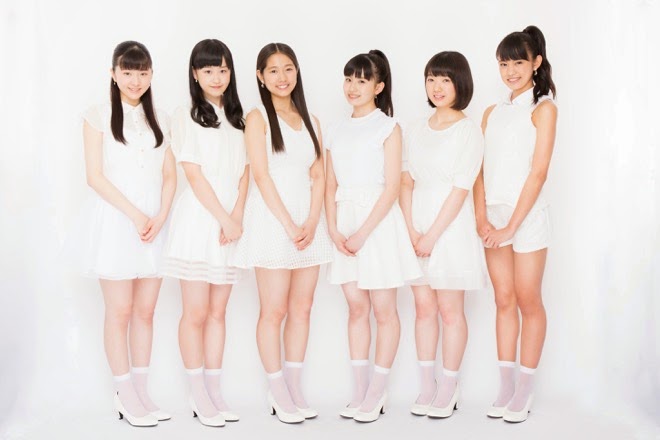 Okay, so first off: I am excited that Hello! Project are debuting a new unit, because once again, it means fresh new blood has been spilled upon the UFP tiles, and also, possible new song styles (or re-invented ones from the good ol' past) as well as new talent being picked out from the girls who have been training since around 2012. That, I don't mind; we always need new faces in the roster, and it's always nice to see Hello! Project actually using their trainees rather than letting them go (see: Up Up Girls).

What I don't like is the name, and how Shimizu Saki refuses to stop beating the dead carcass that was Berryz Kobou.

We get it, you miss your group. But PLEASE stop forcing the name down our throats just because you've been given some form of power behind the fucking scenes. THANK YOU. 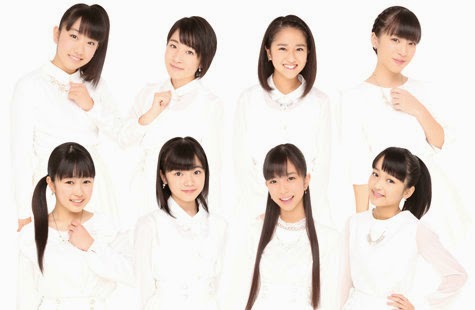 (Note: This is actually Kobushi Factory)

I mean, when Kobushi Factory were announced I didn't mind so much that they were named after Berryz - sure, it was as if Saki was vicariously living through new blood because BK died, but it wasn't annoying or anything... in fact, this group is a successor to Berryz, so the name is understandable.

For Tsubaki, it isn't. Now it's just like Saki's fucking around or something.

THAT SAID... there have been speculations that, with this new group (and the name tie-in, too) both Kobushi and Tsubaki (even the first parts of their group names sound similar @.@) are going to be sister groups, similar to what C-ute and Berryz were meant to be, which also means this:

C-ute don't have long in terms of being around, and so H!P are making their move, and already replacing them with a group that will possibly be similar, or at least, fresh and new and ready to take over.
Either way, the rumours that C-ute will be going, going, poof, gone! in a matter of months are there, and yes, I am scared, because currently C-ute are the most talented major group within the project.

Still, regardless of these valid reasons, I am annoyed that the 'Factory' label is there, because it does indeed feel like Saki is beating that pony no matter what.

... And yes, I know, I may be the only one who feels this way. Still, those are my thoughts on the group name. The group itself, I quite like the look of. I can't say what they're like talent-wise, however.

Now that my whining is over with, let's actually take a look at the members, shall we!? 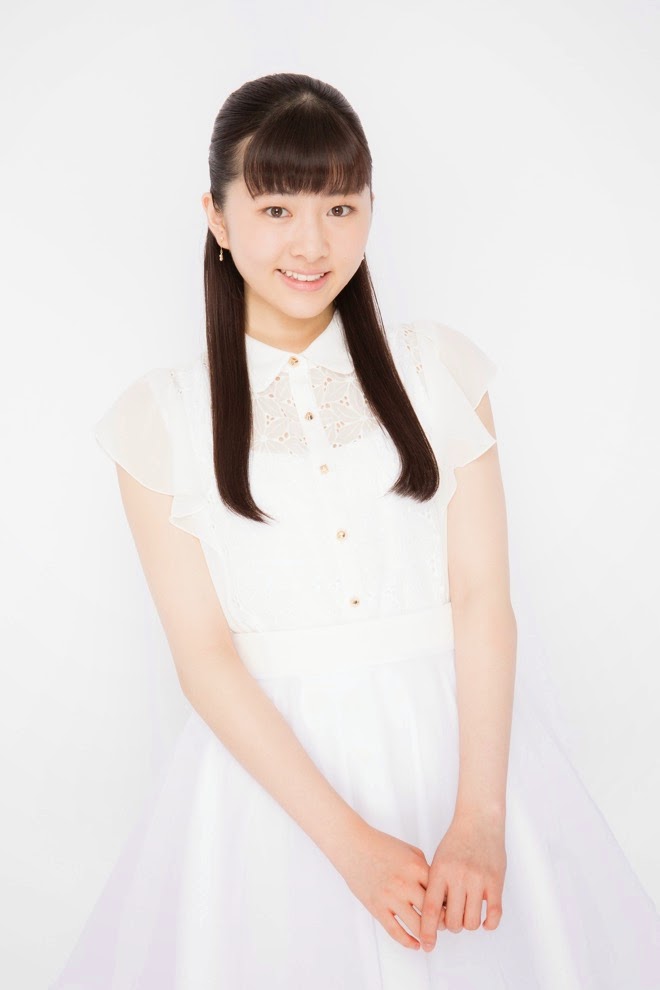 First up is Ogata Risa, aged 16! Currently she's the member with the most longevity, being active since 2011 as a member of the NICE GIRL Project! Kenshuusei, however she was transferred to Hello! Project back in 2014. She is the oldest member of the group as well as the most senior.

She looks like a mom. Maybe it's the hairstyle (because we know H!P sucks with hair-styling sometimes), but yeah, she looks like she should be a housewife, as opposed to an Idol. Still, she does have a very fresh face, which is nice, and seems to have this air of maturity about her...

Actually, the more I look at her, the more I like her! Maybe I'll Oshi her? Who knows... it all depends on if I actually like the group! 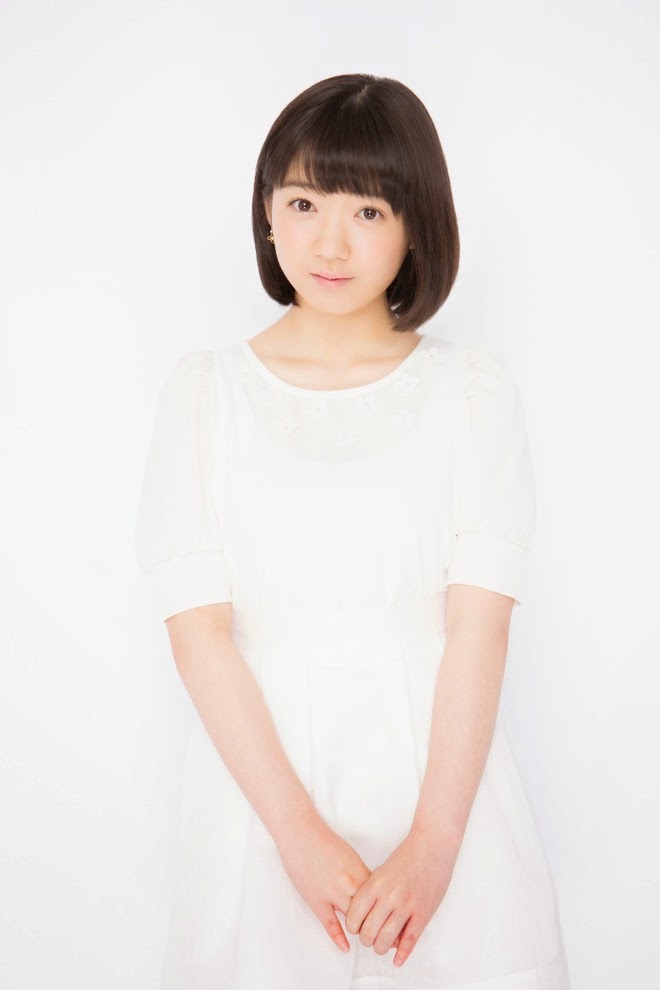 Next up is Yamagishi Riko, who is also 16 and the second oldest of the bunch. Since 2012, she has been an active member of the Hello! Project Kenshuusei. Since joining, she has auditioned for Morning Musume's 11th generation, as well as participated in three stage plays.

With her hair styled this way, she looks like an Otsuka Aina x Miyamoto Karin hybrid, and I don't know if I like that... actually, I preferred her with long hair, it was cute! Still, this hairstyle does suit her (again, though, those Otsuka Aina vibes...) and she is a cute looking member, but it's the whole Karin look I don't find appealing here...

Her innocence, however, does feel refreshing. Maybe she has a hidden cheeky character, though? 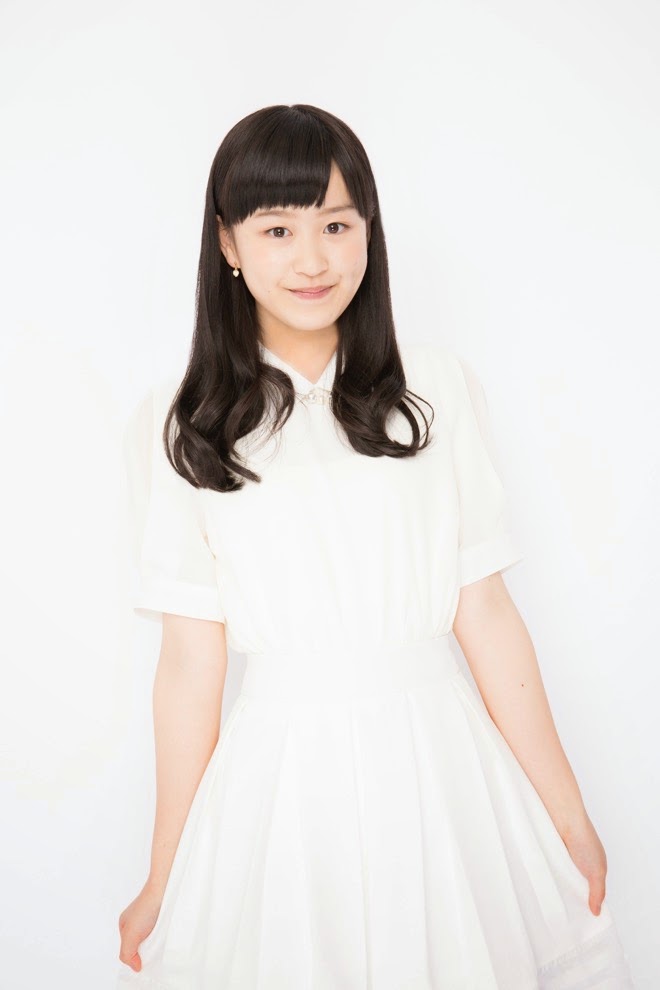 NEXT UP IS... Niinuma Kisora, who is 15 years old and has one of the most intriguing names of the group! Kisora has been active since 2013, having joined Hello! Project Kenshuusei after failing the 12th generation Mirai Shoujo audition for Morning Musume during the final round.

Kisora also looks like a mom, however, she seems to be the one I am actually most drawn to right now. She has this mature look about her, but she feels mysterious, too. I've actually read all of the trivia on her wikia and want to know more about her, so I feel like if I chose anyone as an Oshi, it would actually be Kisora, because of them all, she's the one who intrigues me the most. 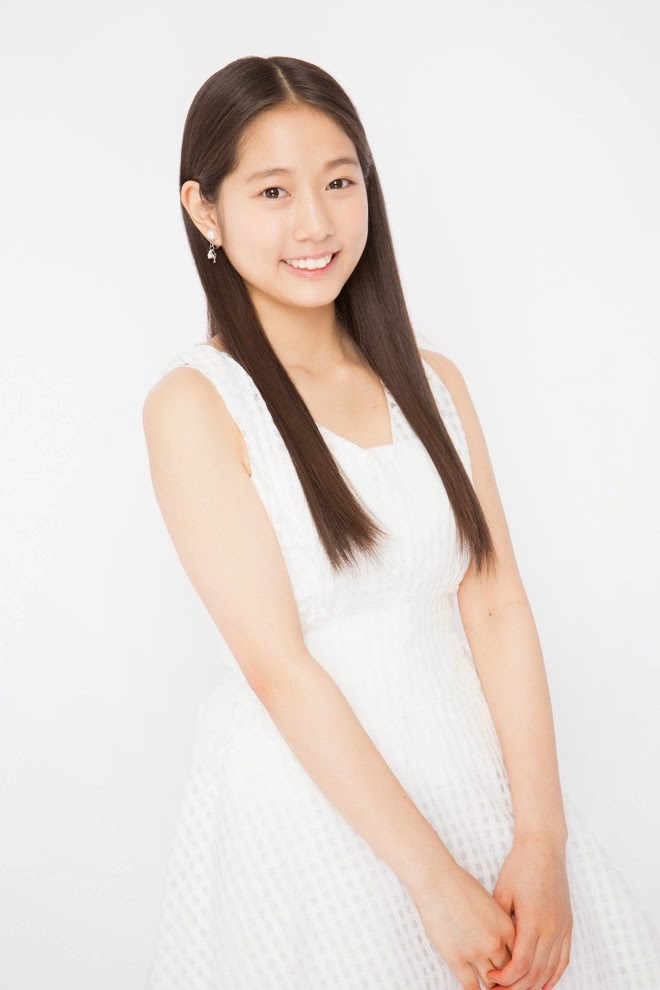 Now it's time for Tashimoto Ami, who is also 15 and a member of the Hello! Pro Kenshuusei since 2014! Ami was a part of the finals for the Morning Musume '14 Golden Auditions to find the new 12th generation, and whilst she did not pass, was added to the Kenshuusei late last year instead, and of course, now added to the new unit that we see today!

She's so new, there's barely any information on this girl! Still, she looks very cute, and quite traditional with her long hair and forehead showing. I actually adore how refreshing she looks, and how pure, too. I think, along with Kisora, she could easily become one of my favourites, more-so for her looks right now, and also because she has a very sweet vibe about her... 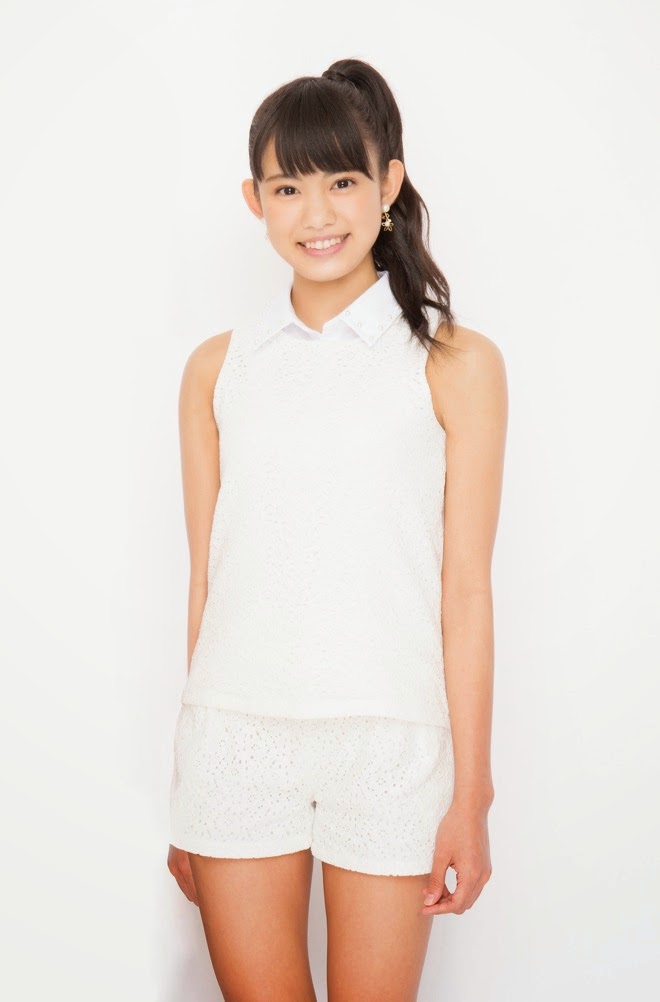 Now we have Kishimoto Yumeno, aged 15 and a member who has the third-most longevity of the group, as she has been a Hello! Pro Kenshuusei since December 2012. Formerly, Yumeno was a child actress under the agency NAC, and after that had originally auditioned for Morning Musume's 11th generation back in 2012, where she was a finalist.

I don't know why, but looking at this girl, I feel like she's a Stardust clone... maybe it's the ears, and the ponytail... and the smile.
But damn, I do like her tanned legs!

Actually, I rather like the look of Yumeno, she doesn't look like a typical Hello! Pro member either, which is nice to see. I also rather like tanned members (I loved when Okai was really tan), and also, that smile! THOSE EARS!!! Them legs!!! Yumeno may just become a favourite, Kisora may even have a rival for Oshi... also, loving that they seem to be giving her a different style to others, what with the shorts and all that (probably to show off her legs, who knows?) 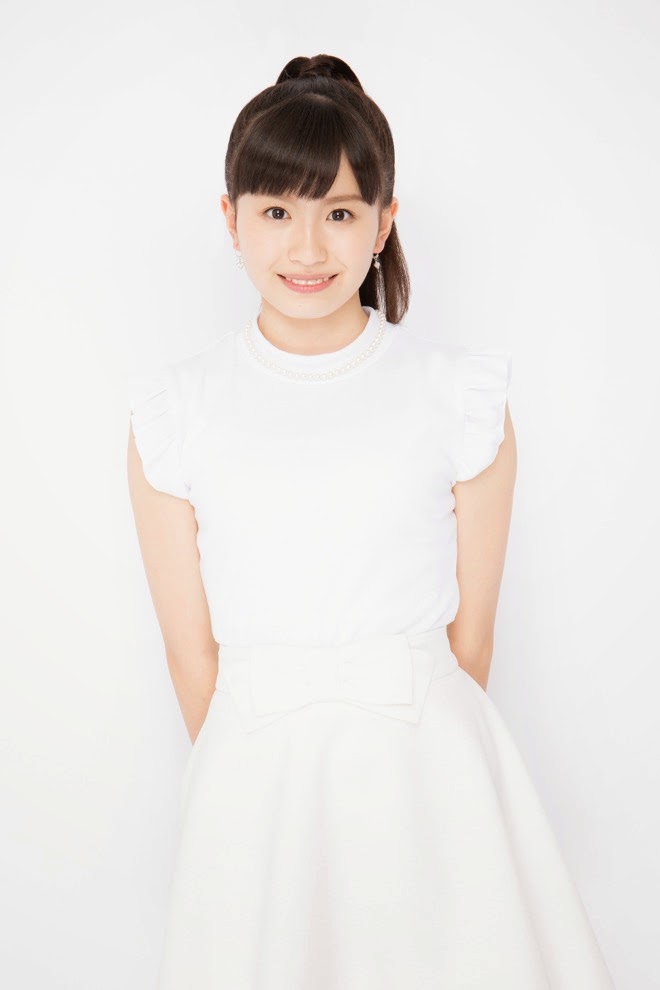 And finally, we introduce the youngest, Asakura Kiki at 14! Kiki joined the Kenshuusei in October 2014, and also participated in the Golden auditions for Morning Musume's 12th generation. She can also play the euphonium.

Upon first seeing her profile, I admit, her smile scared me. She looks angry. That said, after looking at her other profile images on hr wikia, she is cute, but I do prefer her with her hair down, as she feels quite traditional, as if she could be a Geisha. Still, the forced feeling behind her smile feels a bit awkward, too.
I like that she seems talented in music, though, being able to play piano and the euphonium. Of them all, she may be the one to watch out for, talent wise... so, I look forward to that!

... And that is all I have to say about the group, pretty much, other than that Hello! Pro really need to stop Shimizu Saki from naming groups, if she's this creative *cough*not*cough*.

So, yeah, I do look forward to the group, despite their name, and I do anticipate how much I will like the members and what they bring to the Hello! Project plate. I also hope their music doesn't suck (looks at MoMusu '15) and that they're given some quality pieces to work with in the near future, and that they blossom to be an amazing group as time progresses.

So, with that said, what are YOUR thoughts on the new Kenshuusei unit, Tsubaki Factory? Do you like the name, do you hate the name, or are you just okay with it, and what do you think of the members?

As someone who does not follow the Kenshuusei greatly, I don't mind who was chosen, but if there were any members you could add, who would you put in the group alongside these girls? Who would you take out? Let me know!

Until next time though, I will bid you all adieu, and wish you a fine day!