All thoughts and opinions within this post are my own, and no one else's. That is all... for now.

This post may be jumbled due to a raging headache, and my persistence to write this despite said headache killing me right now. Hopefully the garbage I have written will suffice. I apologise for terrible writing ;w;

Though I wonder if I should call this an 'Appreciation' post, let's appreciate one of the most annoying members of Berryz, but also the most respectable!

She's the second oldest, and someone we want to kick a little. It's Tsugunaga Momoko! 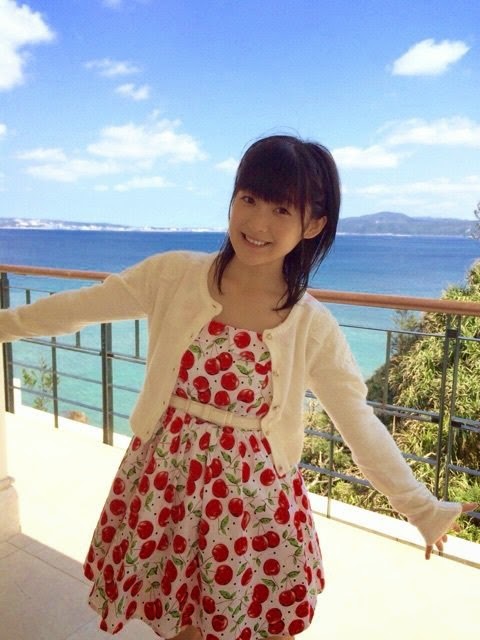 Tsugunaga Momoko is an anomaly, to me; of all the Idols I have ever experienced as a fan, she is one of those rarities that confuses me to high Heaven, even now. There are times where I like her, times where I am frustrated by her, and plenty of days where I respect and adore her.

Of all the Berryz members, she is the one who confuses me the most, and the one that I probably would have happily see go, right next to Miyabi and Risako... and yet, she's the one that I am glad will be continuing an Idol career, too.

This is Momoko, and holy heck, she confuses my feels! 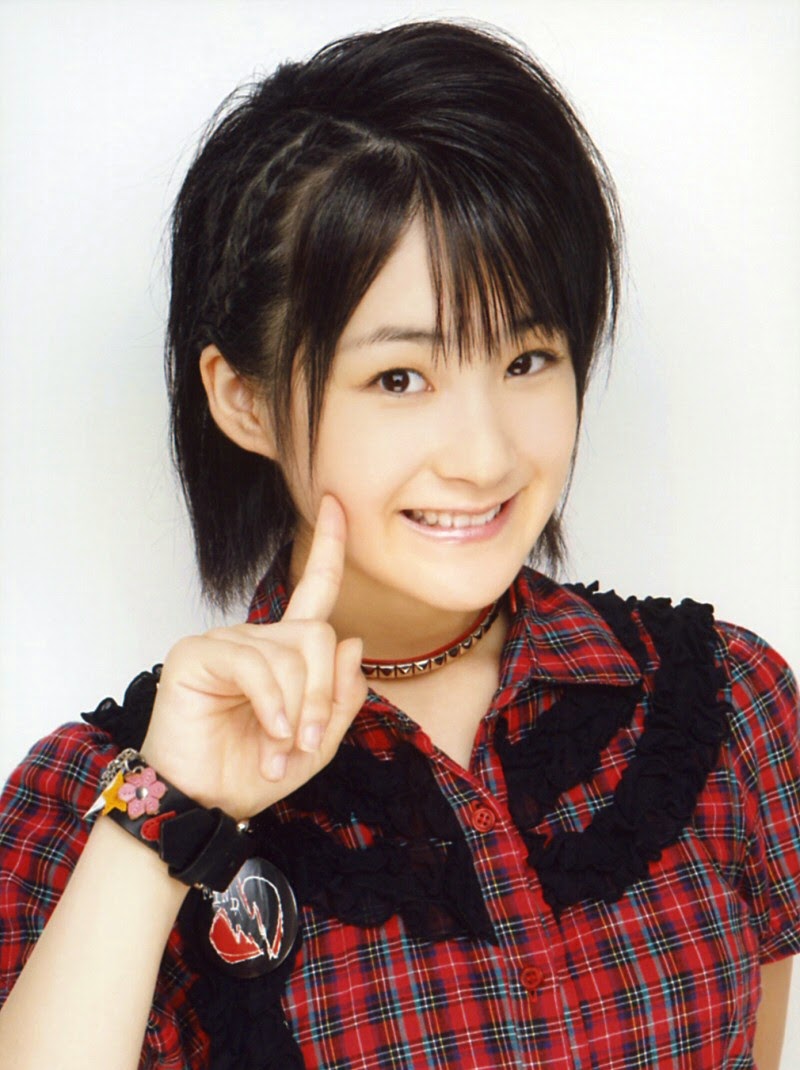 The first time I was introduced to Momoko was back when Buono were still all shiny and new, and the only group bringing in the dough for H!P. In that group, she was this spunky little thing who was cute and all shades of adorable, as well as my favourite member and what I thought to be one of most adorable singers ever, right after Koharu. Seriously, I liked her.

To me, she wasn't annoying at that point - she was just some Idol who looked like she was loving what she did, and who was having a blast in her little 3nin group, and I adored that about her at the time. She basically represented everything an Idol was meant to be, if you will; small, cute, innocent, energetic and sweet, a nice enough voice and the personality of a child... she was wonderful, and she was thoroughly entertaining. So yeah, I enjoyed the entertainment she provided. It was fun watching her.

I didn't seem to care much for her in Berryz, however. Still, in Buono, she was my little star. 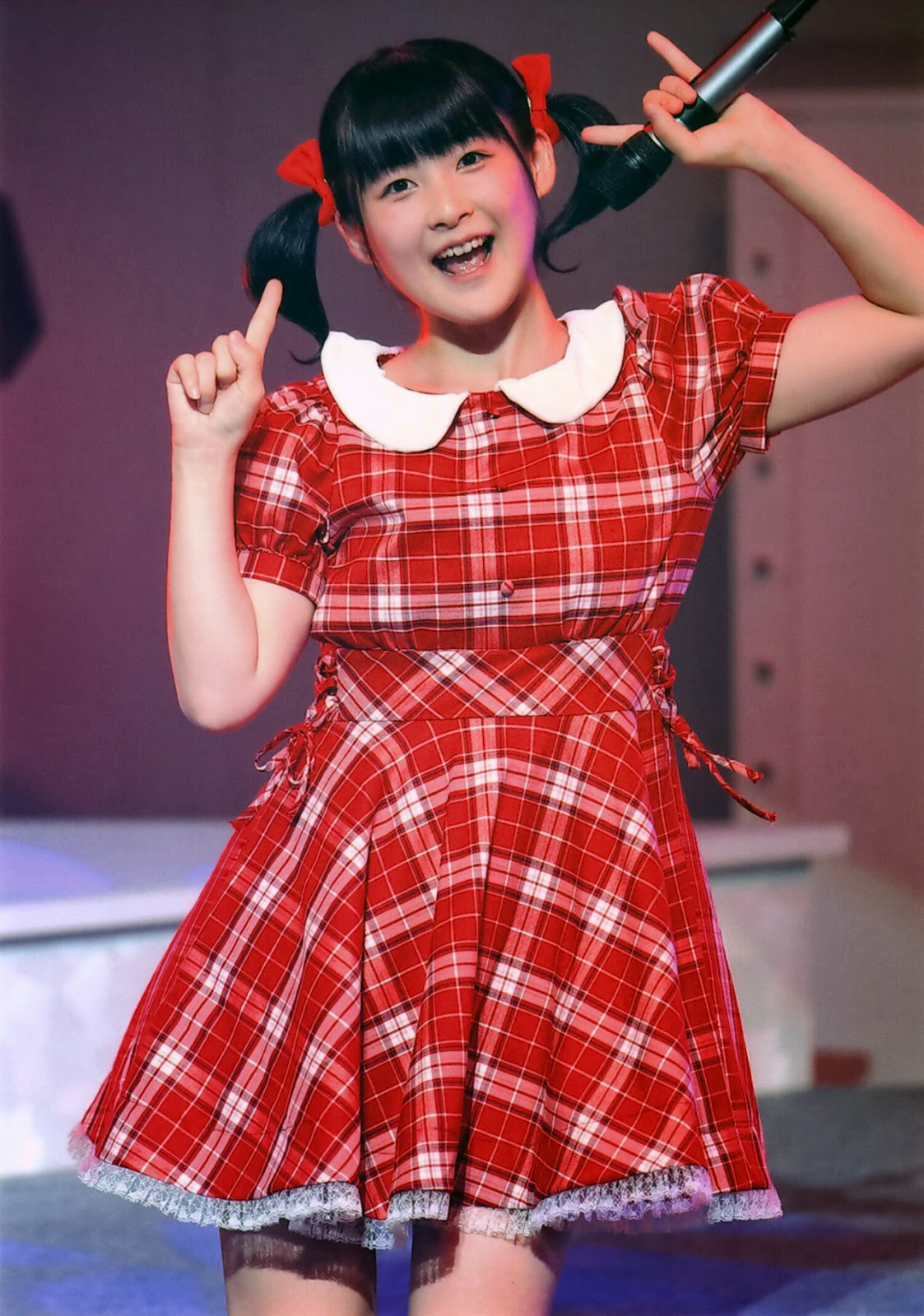 It was around the time that Berryz became boring when my feelings for her got a little muddled. On the one hand, I really enjoyed her in Buono and how great she was in that group, but on the other hand, she did nothing for me in Berryz, and I found her dull.

That was before she put on the 'Momochi' act, mind. When that little character of annoyance came along, however, my feelings towards Momoko, or Momochi if you will, were definitely mixed.

Irritation. Frustration. Annoyance. Deep dislike. A wish to burn those fucking pigtails and yell at Momoko for her stupid character.

It all made me rage, and it made me feel differently towards Momoko for a while, though in a way, that was the point; Momochi was created to cause tension and discord, made to annoy and produced to frustrate. She created a persona that was, in many ways, an annoyance and distraction, but a character that also brought some life into Berryz. Yeah, they were boring, but there was only one girl who made them stand out with her stupid persona that managed to capture everyone's attention when on TV.

And, for that, I do think Momoko is a bit of a genius, though an annoying one. Oh, all these conflicted feelings... 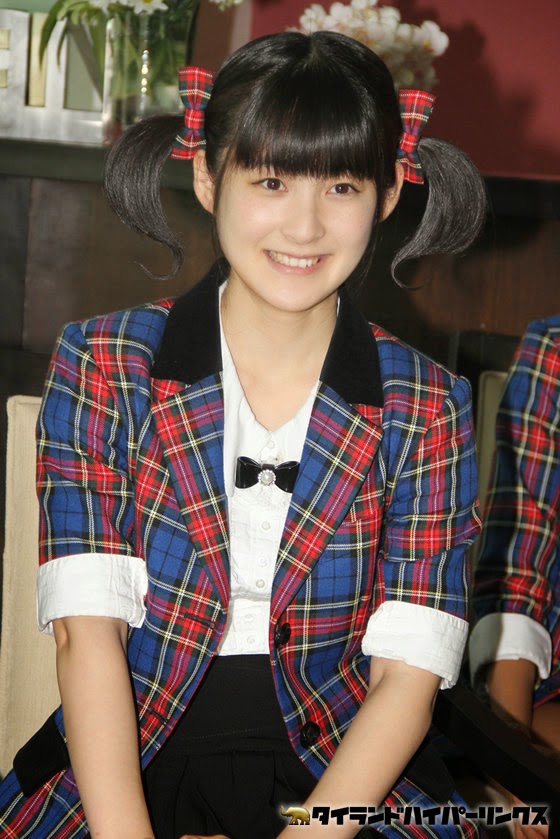 Despite my absolute dislike for her at that time, though, I was also feeling something else for her; respect. Of all the members, I think that Momoko is the one I've learnt the most about, in terms of her Idol persona. Not only an Idol, she also went to school and University, and earned her degree. She had ambitions beyond her career within Hello! Project, such as wishing to work with kids when she left the industry, and I knew that she was juggling a lot of things all at once, whilst also managing to keep Berryz afloat off her back, knowing well that despite being an annoying character, she was still keeping her group and career alive.

For all of that, I really do respect her, because it showed her dedication and love for Berryz, as well as her own future.

Much like Michishige Sayumi, in that respect, Momoko did all she could to keep Berryz Kobou within the public eye through creating a pest of a persona, and letting her presence be known. She promoted and boasted about the group, allowed their name to be known and songs to be heard, despite the backlash she may have received from fans. She kept her head held high throughout the abuse she received, and smiled no matter what, always doing it not for herself, but for the group. Yeah, she may have seemed conceited and annoying, but it was something that got her noticed, and it allowed for Berryz to be known.

Where the others couldn't create something to attract attention, Momoko was the key to a dwindling Berryz' success. Through devotion, love and dedication, she was able to come out on top, and to show people that Berryz were still around, and that they were still pretty good Idols. 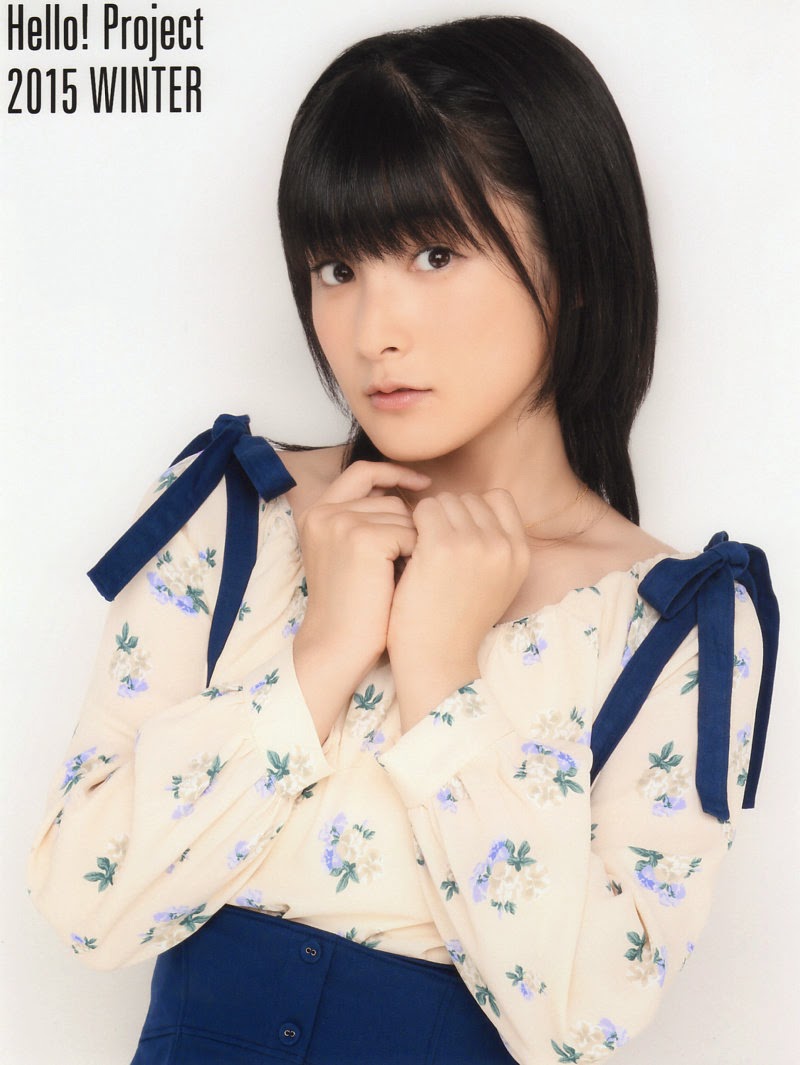 It's not just her dedication to Berryz or her University work that makes me like and respect Momoko, but also her talent; I won't deny that Momoko is one talented girl. Sure, her voice can get annoying, but that comes with her persona sometimes, but she does have good vocal pipes on her, and I like that. She's also fun to watch, being quite an energetic performer and all, so even with those atrocious pigtails (which seem to have disappeared... for now), she is still really entertaining to watch.

Of all the Berryz members, aside from Chinami, Momoko has to be one of the most charming and energetic of the lot - she has expression, a bundle of energy, and great charisma in front of the camera. She knows how to charm the viewer, whilst also slightly irking them, and brings the video to life.

Of all the members, I do think she is the one who can be called a 'True Idol'. 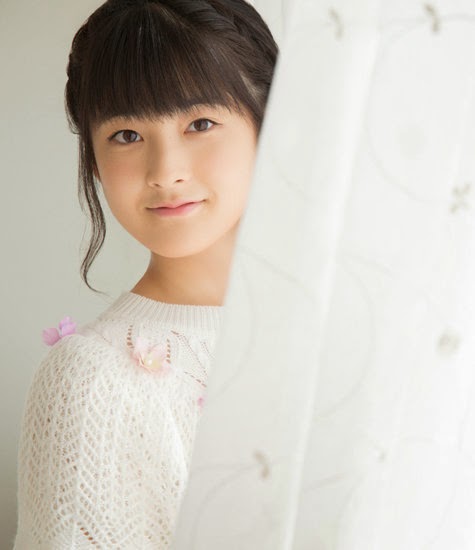 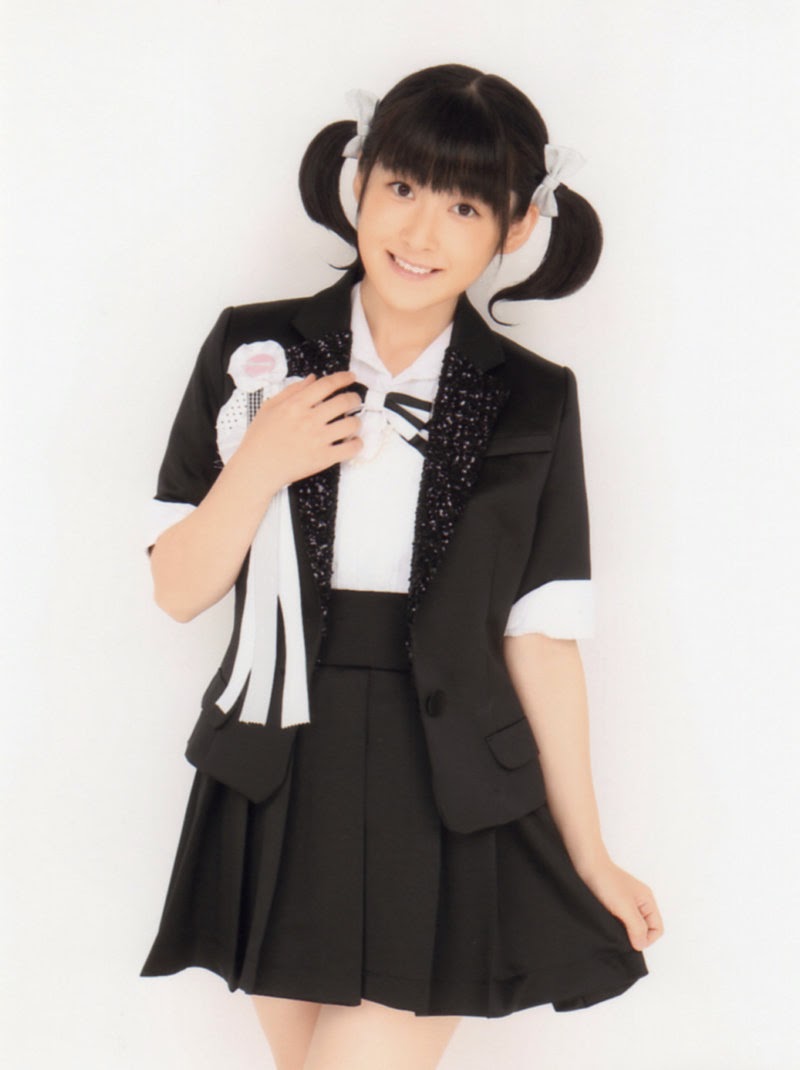 Though I find her annoying, and though I feel a little cheated with the fact that she's still going to be an Idol, even after Berryz have disbanded, there is a part of me that is really happy to see Momoko continue as an Idol, despite this change in her career. She's the only one who could do it, for one, and also, Momoko is far too young and talented to let go of right now, and is certainly a great benefit to Country Girls now that she is mentoring and watching over them as both a member and sorta-manager to the group. So, yeah, I am happy that she's staying, despite how annoying she can be.

She's someone who conflicts how I feel, an Idol who can rile me up and rub me the wrong way, but also someone who entertains and pleases me, too. I find her fun and appealing, but I find her annoying and stupid, too, but that is the strange appeal of Tsugunaga Momoko, I suppose - she's an Idol who can do so much to you, and still have you feel like you want to watch her, no matter what she does. 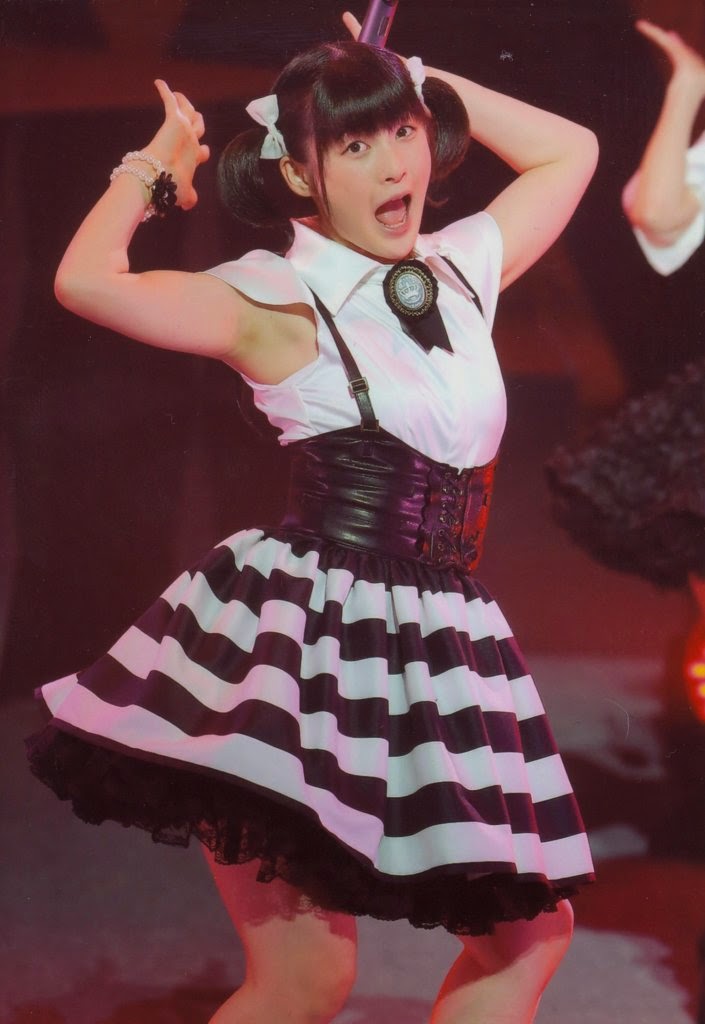 As an Idol, she's not done yet, and it may be a while before we get rid of this annoyance once and for all, however I don't mind so much, really; she's a respectable girl, one who has done a lot for Berryz and her own career, and will continue doing so, but with Country Girls instead.

She lead one group out of complete darkness, and now it's time for her to lead a new group into the shining Idol light. Sure, she may make me want to kick her in the face sometimes, but damn, I can't help but respect this girl and what she has done for Berryz Kobou, and H!P as a whole.

This song may annoy the fuck out of me, but because this is my 'Appreciation' post, let's add it here for old times sake.

She's not gone yet, but hey! So long as those pigtails don't resurface any time soon, we'll be okay!