[A Week with Berryz] Lodge A Bullet Between My Eyes... 'Ai no Dangan' Single Review!

All thoughts and opinions are my own, completely. Don't like what I have to say? That's fine, because you're entitled to YOUR opinion - don't take mine as fact, but don't expect me to change my opinion to appease yours, either. That's not how opinions work. My mind is my own, my thoughts fluent, and here I word them, and make them known. If y'all have such an issue with said thoughts and opinions, find the door. Or the 'x' button. You don't *have* to stay.

This is the era I dread, but also an era that we are currently experiencing, if you ask me. An era that, very soon, will end, thus taking away my misery at having to watch Berryz and their half-assed performances in their PV's. Yes, my dears, we have now entered the territory of 'shit-ass-Berryz'. 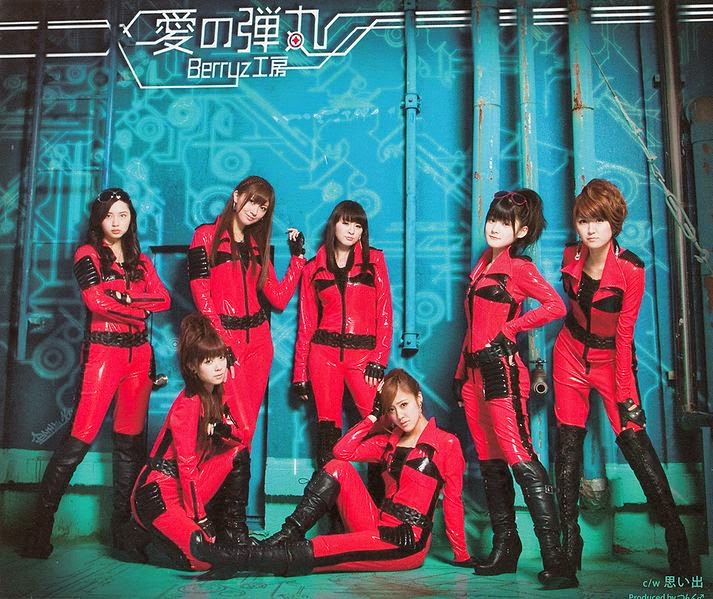 I think this was the era where I stopped giving two fucks about Berryz. At least, that's what I told myself; I still liked their music. Their image, however, put me off of them completely. Case in point: Ai no Dangan.

Like S/mileage, Berryz trying to be sexy was the biggest failure known to man, and Ai no Dangan is a great example of how not to try and be sexy, because really? You don't get more awkward than this... well, you couldn't get more awkward than this, until Mystery Night happened. This video is still just as bad, if not on par with how horrible it is, and all shades of fucking awkward.

Good thing I'm not going to talk about the video much today, because thankfully this is a single review. That said, I'll be sure not to refrain from voicing my disdain over the video, how giant their asses look in their red condom suits (A friends words on the condom suits, not mine, I swear) or how painfully shit that choreography was. Still, I'll try to keep focus on the songs at hand here, rather than the craptastrophy that is the video for Ai no Dangan.

So, with that said and done, I have given you a glimpse of how I feel about this release, but my tirade is only just beginning. I wonder, will there be some light at the end of the tunnel, or is this bullet just waiting to kill me now, before I can even find goodness to counteract the tack? We shall have to wait and see to find out...

Ai no Dangan by Berryz Kobou

Back in 2011, I loved this song. Okay, I seriously liked it, as opposed to loved it, but I thought it was great, and when I said I would review this song when requesting for suggestions, I noted that I thought Ai no Dangan, as a track, was pretty good.
This was before I had listened to it for the first time in, what? 3 years?

I've only just realised how much my tastes have changed, and how boring I find this song. Bland, dull, unimaginative... try-hard. The only impact it actually has on me right now, in all of my matured (ha!) and cold-hearted state are the sounds of the guns being shot and fired in the background. Other than that, I find nothing incredible to note about this song.

Oh wait, yes I do; this was the point where Risako's Whale Calls began to piss me off. Because that was interesting, clearly.

Still, from what memory serves, I really did think highly of this song back in the day when it was still so new and shiny, though it really wasn't a song that could hold a candle to the likes of either Shining Power or Heroine ni Narou ka - both amazing in their own right - and I played it a lot, I recall. It was, at the time, rather fun, and great to sing along to. Now though, I just think meh. I don't know why; again, I suppose my tastes have changed. That, or I'm becoming one of those dreaded 'old wota' and getting gnarly with age. Who knows?

Either way, this song does not jingle my bells like it used to, which sucks a bit. Let's blame the really bland, sub-par vocals going on in the song for that for now, shall we?

Briefly, let's talk about this video; by no means is it all that bad, because it does have a few perks to it that make me want to love it. Namely, the filming process of it all. This is a really well-shot video, and it has a nice idea going on with the background screens, and I even love those glittery background effects and the light show going on around the floor! Hell, that opening sequence? Beautiful. Coloured backdrops that look like they are straight out of a bond movie? Gorgeous.

The rest of it?

Pure, ugly tack, all wrapped in a big red latex condom outfit. The only saving grace of those costumes has to be how good Saki, Risako and Maasa's hair is in this. The rest of it can go to hell and back.

Seriously, it's just... gross. Even when I first saw the video, I couldn't stand the tackiness of their costumes or the terrible choreography paired with their atrocious costumes. It's like watching a poorly done strip tease, paired with an old woman who has done her hip in - it's a really fucking bad dance piece, and yes, I hate it. It's awkward, it's a giant red siren of 'what the fuck', and it looks god-awful. Seriously, no. No Berryz, no.

... I think we can tell that, during this time, I definitely wasn't feeling the fizz and life of Berryz. Seriously, watching this PV back in 2011, and once again watching it now, I feel the need to put a bullet between my eyes. Bleach. My. Memories. Please.

Okay, so, the real reason why we're here; I was asked to review this single by a friend, Jenny, because she mentioned that the b-side was glorious. After the fuck-fest I've been through, I am hoping beyond hope that, indeed, Omoide will be my saving grace. I've never heard it before, so we're getting a taste of 'react as she writes' courtesy of Chiima right now, so yeah. Hoping hard for greatness here.

And oh. Oh yes. YES this is goood. Thank you, Jenny! You have saved my ears!

Where Ai no Dangan sounds bland, let's just say that Omoide is like a club mix made of Heaven and goodness. It's a more mature sound from Berryz, at least from what we've heard from them this past week, and it's actually very pleasant to listen to as well, which is surprising. It's a very nice song, and sounds reminiscent of some of the club-like songs Morning Musume have used for their b-sides in the past (back when, y'know, b-sides existed in the H!P archives) and yes, it suits Berryz well.

In many ways, I kind of wish this had been the A-side, though I can see why they stuck it as the b-side instead; tracks like this, with club undertones at least, do not make the A-side. This is H!P, not Hinoi Team.

I admit, this isn't the greatest of b-sides I have ever heard, but on this single, it's the saving grace track of the two songs you have here, and I like that it has that mature sound to it that suits Berryz well. It's a good song, probably amazing to hear live, but it isn't fantastic. Still, it's a whole lot better than what Ai no Dangan was, at least to my matured wota ears. This one gets an A+ from me for that.

Now I just need to dig around for a live performance clip of this song.

Okay, I admit that I went into this thinking that I would still like Ai no Dangan like I did, only to be disappointed, but you know what? I don't mind, because tastes change, only I've never experienced the change of disliking a song I once enjoyed, because I've only ever liked a song I once hated. So, this was a first, but whatever.

In general though, Ai no Dangan's release was pivotal in how I felt towards Berryz back in 2011; this was the first PV I think I felt disdain towards back then, the first video I thought was utter shite from them. Previously, I didn't mind their other videos I had seen, but when this one came out, I despised it. Everything about it was off-putting, except the song. Now, I see things a little differently; I like the camerawork, I like how it was filmed, but I still hate the choreography and costumes and how tacky it looks, how the dance feels like a pole-dance with a side of broken hip. I can find stuff to enjoy, but what I disliked then is still evident.
The big difference is, this time not even the song can save it for me. Back then, the song made it all the more better. Now it's just boring. I feel a little sad about that.

Lucky for me though, Omoide saved what little dreg of hope I had and scooped me back up, because it is a good song. I would say decent, but it is more than that, and I do enjoy it. It makes this trash look more appealing, by far, and it's fun to listen to! It brings mini-Chiima, back in the days of loving club music and rave tunes, out and gets her waving her arms around. Sure, it isn't the best b-side track I have heard in the entire discography of Hello! Project, but it's still nice to tune into. It's catchy, the beat is nice, and whilst it isn't overly energetic to my own ears, it's something you could tap your foot to in appreciation. And yes, I'm tapping my foot in appreciation. I wholly appreciate your existence, Omoide. Thank you for saving my ears.

As a whole package deal though, I'm going to have to say that Ai no Dangan is, in my opinion, one giant flop of a single. I like Omoide, don't get me wrong, but it's not enough to sate my inner demon. It is, in so many ways, a very weak single that tried to compensate itself by giving a psuedo-sexy video, only to have that fall flat on its arse in the process. It's just not good, to the point where not even the b-side could save it.

Ai no Dangan is, without a doubt, absolute shite. No wonder I see this song and video as the beginning of the Berryz downward spiral. Urgh.

Okay, I'm retracting my claws now, but wow. I didn't expect to shit on this single as much as I did, because again, I initially remembered how much I liked the song... but instead, I found that I actually dislike it more now. Surprise? Well, no matter... these things happen, and hey! I had to unleash the inner demon that is my Berryz-h8r tater at some point, right? It just so happened to be for this single.

I don't regret it. It's nice to have a little rant every now and again, even on a song I previously enjoyed.

Despite my feelings towards Ai no Dangan as a whole however, what do you guys think? Did you enjoy it, and do you think it's everything I think it isn't? Or do you loathe it as a video just as much as I do, or even dislike the song? It will be interesting to find out!

Until next time, however~

Much Disdain over this single,
Chiima~
Posted by Chiima at 22:06