[A Week with Berryz] Going Back to the Classics, it can only be 'Waracchaou yo BOYFRIEND' the Single!

All thoughts and opinions within this post regarding the song(s) reviewed, as well as the video and group, are completely my own and are not to be taken as fact - this is simply how I feel, and if you feel that you do not agree with me, then that's good. Opinions are what they are; opinions. Don't get affected by what others think or feel, when you know full well how YOU feel. Thank you.

I've since missed a day of my [A Week with Berryz] series in favour of homework that I had to do, and whilst I am unhappy that I missed a day of this series, I won't apologise for placing my personal life over blogging; I love what I do, however University takes place before my blog series.

I still aim to write two blog posts today to compensate, however. We have a lot of Berryz to get through, after all!

And with that said and done, let's take a look at the first single review of the series, as well as one of my favourite Berryz songs from their current single collection. Of course, it has to be Waracchaou yo BOYFRIEND! 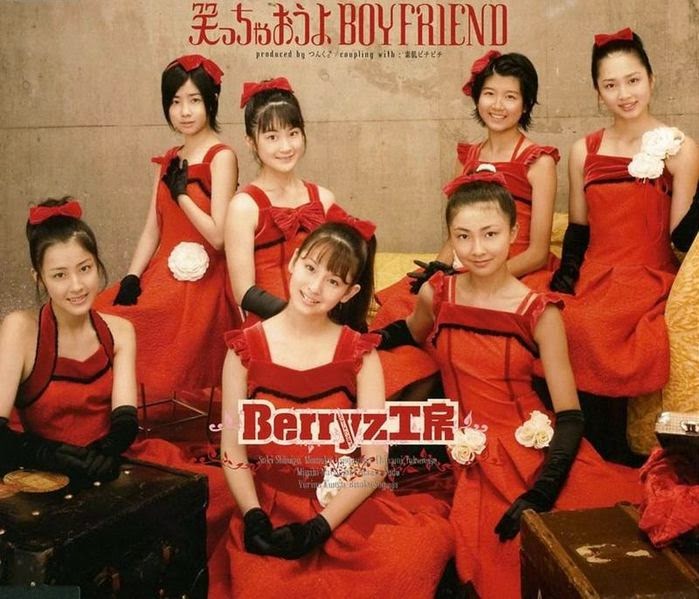 Back in 2006 when Waracchaou yo BOYFRIEND was released, I was 13 years old and getting into Anime and Manga. I had also opened up my first ever youtube channel that year (holy cow) and also just getting into the internet, because I had never really experienced it before. The one thing I was not experiencing during this pivotal time in my life, however, was Berryz Kobo - I didn't find out about Hello! Project until 3 years later, so the group was still an unknown entity in my mind.

Still, the Lord named Tsunku decided to bless us with this song, even though I was completely unaware of its existence. So really, thank you Tsunku.

I won't go and say that this is my favourite track of theirs of all time, because there are a few songs from Berryz that I really enjoy a bit more than this one, but in general, Waracchaou yo BOYFRIEND may just be my favourite Baby-Berryz track, because it's just so darned cute and addictive! I mean seriously, how can one hate this song!? It's awesome!

Before I go into cuteness overload however, I will actually start looking at the songs and, you know, reviewing them as best I can. So, without further ado, let's take a little peak into the sweet innocence that was Berryz Kobo back in 2006, and listen to the delight that happens to be their 11th single, Waracchaou yo BOYFRIEND. Are you ready for an abundance of cuteness?

I have said previously that this song is one of my favourites from the group, and I think that might be down to how much a sucker I am for the cute, fun songs that are carefree and so-damn cavity-inducing, which is pretty much what Waracchaou yo BOYFRIEND is as a song. Basically, it's everything I look for in an Idol song - it captivates me, it's addictive in its sound, and it has this bright and vibrant quality to it that hooks me right away. Really, with all of these aspects surrounding it, how can I not fall in love with it?

And let's not get into the fact that it sounds like it's supposed to be played in 50's Diner! Hello, much-loved Nostalgia! Seriously, when Tsunku wants to go back with his music, he does it well, and he makes it addictive. Just look at Waracchaou yo BOYFRIEND - it's a pretty good example.

Even the video, in all of its cheap glory (that was possibly seen as pretty okay back then, because y'know, this sort of CGI was the top-shit in all of its blocky glory once upon a time) is pretty fun to watch and show you that cute, carefree side of Berryz that we all know and love! Granted, it isn't the best video they have ever done, given the pretty terrible quality and all of the green screen, but it has some character to it. Namely, it has the members of Berryz to it.
They really make this PV worth watching, and seriously, they're all darned adorable in this! Momoko is so cotton-picking cute, Captain's hair looks decent (and she's fixed her creepy Chucky grin, I think) and Risako has her ears out! Even our little foal Miyabi is at her most adorbs in this!

So, shitty quality = forgiven, because they're all farkin' lovely to watch, they have wonderful personalities, and they look like they're having a whole lot of fun! I love it, and I can't help but think that Waracchaou yo BOYFRIEND is a good ol' representation of Berryz when they were at their cutest.

Light-hearted in sound, carefree in nature and nostalgic in tone, Waracchaou yo BOYFRIEND certainly has a special place in my heart, and is one of those songs that I can't help but think of when I think of Berryz Kobo.

Whilst I do like b-sides quite a lot, I admit that I skip out on a few because I either haven't really bothered looking for the rest of the single (I like the A-sides that much sometimes, I suppose) or I just forget to look at them. Suhada Pichipichi is one of those that I overlooked because I forgot to check it out.

Let's just say that I'm an idiot and be done with it, aye?

Seriously though, how could I ignore this song!? It's like Pucchi Moni on a little more crack than usual, with the cuteness of Berryz Kobo to enhance that energy and cuteness! Seriously, it's adorable, and a lot more energetic than I had imagined. I was pretty set on not liking this song when I went looking for it, if I'm honest with you, but really? This is great! It's hyperactive, youthful and fun, and quite possibly even more cavity-inducing than Waracchaou yo BOYFRIEND is.

Also, I feel like I know where S/mileage's good, cute discography's inspiration came from now; it came from Baby Berryz, and it came from this. I swear.

Holy heck, even the live performance is darned good! I love the energy and happiness this track exudes, and I just enjoy how it makes me feel a little drunk and light-headed thanks to the high tones of hyperactivity the song brings forth. It's great, it's fun, it's blooming addictive and it basically represents that youthful era of Berryz so darned well.

This song, in a good way, makes me feel rather dizzy and raises my sugar levels quite a lot, so I have to wonder just how in the world did I manage to miss Suhada Pichipichi for so long, and why, oh why, is it not shoved into my head more?
Seriously. I like it. Need I say more?

If you have not yet gathered, yes, I thoroughly enjoyed this single and what it has to offer in the form of Baby Berryz. Though one of their older tracks, this is a single that showed off the groups youth, energy and carefree nature really well in the form of two songs, one light-hearted and nostalgic, the other sugary and hyperactive, and really captured their child-like, innocent nature really well. It's playful, and it becomes addictive the more you listen to it, and neither song annoy me, either. In fact, I really adore both songs, and one of them I've only listened to a few times now, but hey! I like it, that's all that matters to me right now.

I find that, though both songs are cheerful and sweet in their own right, compliment each other pretty well - usually with an A-side and a B-side, they are completely opposite to each other in sound, tone and style, and whilst the styles are definitely polar opposites and the sounds pretty different, too, the tone of the songs are both very cheerful and sweet, yet still somehow managing to bounce off of each other well. I suppose it's because, at the time, it was a nice mix of old-meets-new in a sense, what with Suhada Pichipichi being a staple Hello! Project sound at the time and Waracchaou yo BOYFRIEND holding that old-fashioned, but still addictive, quality that is not only refreshing, but enjoyable. So, whilst both songs are cute and happy, they still work well together without overwhelming each other.
TLDR; Thus, a pretty well-balanced single was created.

Overall, this is a really cute single, and whilst I have a feeling most of you have heard both songs, if you haven't, then be sure to give this single a chance - it's fun, vibrant and, of course, so darned-cute you might just faint from how lovely it is. Both songs are great in their own respect, but what they both do so well is capturing Berryz in a positive, cheerful light and allowing you to see, and hear, that element of fun and happiness in their music and performance. Indeed, Waracchaou yo BOYFRIEND as a single is truly one of my favourites.

No matter what, it will always have a place in my heart.