S/mileage No More, but instead: ANGERME! The Angriest of Angels Tears!

All thoughts and opinions are my own, suck it up, kinda likeI have to eventually suck up the fact that this gross name is here to stay.

... Well. I think I've found my contender for the worst decision of 2014, in terms of Hello! Project decisions at least.

And here we all thought Morning Musume '14 was shit. Yeah! 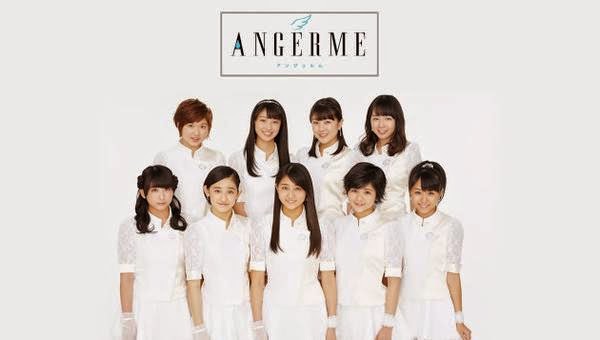 So finally, after many many months of speculation and waiting, S/mileage have officially changed their name to ANGERME. According to various sources the meaning behind the name is actually 'Angels Tears' in French (ange + larme), and when put together we have ANGERME.

Except, it looks more like ANGER ME!!!! than it does Angel Tears, and honestly, it looks really ugly as a name. It's not sweet or girly, or elegant and gentle like the name Angel/Ange suggests. It just sounds and looks... well, gross. It really doesn't suit the image the image of S/mileage, not unless they suddenly became a heavy metal band or something...

and, given that they are apparently releasing a song titled 'Revenge of the Maiden', maybe they are going heavy metal!? That'd be cool, though a good chunk of the members wouldn't suit that style of tune... still, though. It would work with the new group name, at least!

But yeah, that name isn't attractive and honestly, I will forever think of it as an angry notion to being angry rather than a group name, I believe. That said, the way the title is styled is totally different; it reminds me of Final Fantasy in how it looks! Actually no matter what the name is with that style of writing and the tiny wing logo, it looks pretty appealing in its own way, but only because of the font and how professional it looks. Still, the actual name itself, that's gross beyond compare.

By the way, according to reports the name was suggested by Gorilla-chan, our dear Nakanishi Kana. Girl, I am disappointed XD

Honestly, I can't get over how... well, how overly bad this is! I'm either laughing at it or lamenting the name change. No matter what though, this is quite possibly the worst decision of 2014 in terms of all decisions made, and honestly, I thought the decision to shuffle some random NG46 members into AKB and vice versa was a shitty decision!

No matter how much you try to convince me of the meaning behind the name, I will find it ugly as fuck no matter what, for however long I feel is necessary to me. Why? Because we went from such a cute, meaningful name to something that looks and sounds ugly when written or spoken (because I will say it as it looks; ANGER ME!!!!!) so of course, I'm going to lament and whine about it. Honestly, I doubt I'll ever get used to the name, because to me this group is S/mileage no matter what.

I'm not happy with this decision, obviously, but at some point or other I will have to suck it all up and accept what has happened; that S/mileage are, literally, no more and ANGERME has officialy replaced them. No matter how much I bitch and whine, and no matter how stupid I think Hello! Project are for actually agreeing to such a god-awful name, this is what has happened and this is how we will have to view S/mileage from here on out: as ANGERME, the angriest form Angel Tears I will ever know.

Once they were S/mileage, and now they are ANGERME, the grossest name in history. Goodbye to a good name, hello to a disgusting one. Sayonara, S/mileage. Y'all be no more!

I'm going to go and cry now, because this is just ew.