Is 3 the Magic Number!? Introducing the S/mileage 3ki!

Correct me if I'm wrong, but it really wasn't too long ago that the new S/mileage generation was announced, right? I mean sure, we had to wait a bit after the new Morning Musume members were announced (read: a few days) in order to find out just which Kenshuusei members would be picked from the dwindling bunch to be placed into one of Hello! Project's little flop groups (which, admittedly, is beginning to season again. Cripes) in order to help said group grow even more.

Well... they have been picked. Finally. 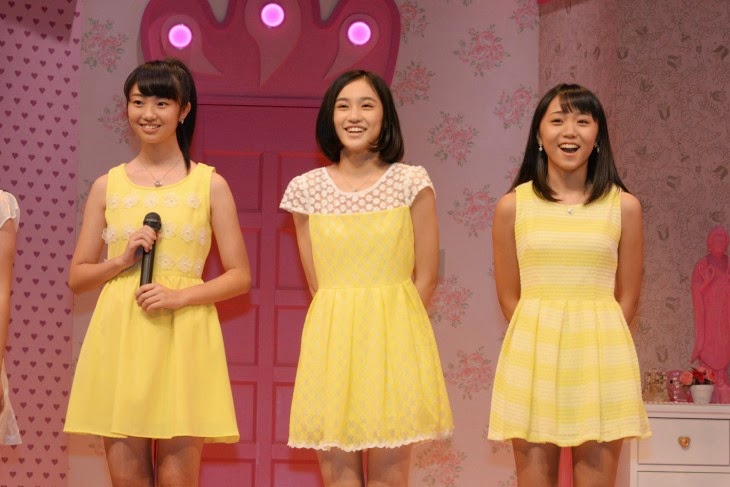 Colour me surprised, Rikako is in there! And some midget as well, plus a Ponytail girl. Wow. Wow. This new generation of S/mileage...

I'm actually a little excited! Yeah. Me. Excited. For S/mileage. Or what is soon to be Not-S/mileage. They are apparently changing their name too. F/loppage, anyone?

Moving away from name-calling, I really am surprised! Not that the group has new members, I expected that at some point, given this group has that revolving door image similar to Morning Musume's own ever-changing roster, though this group is a tad more sporadic in when or how members come to be added, and already it has been around 3 years since the 2ki were added, so I suppose it was about damn time to add in some fresh blood to the mix. I mean, Nyon and Dawa are getting a little old now, they're getting on in their Idol years. Also, up until recently, this group has been one big mess of 'What the Fuck is going on here?'.

So yeah. I dig this bunch of newbies. I like this change of pace, actually, and I fully welcome the Kenshuusei on board as new S/mileage members. Why the heck not?

Of course, not everyone is in favour of this change of pace, or at least that is what I have speculated. That, or some are a tad too enthusiastic at the prospect of Rikako being a part of S/mileage. Again, speculation, observation... people-watching, if you will. I've just seen a mixed bag of reactions, both positive and negative, regarding the addition of Rikako. The other two? I don't think there is so much controversy, but Rikako is a big deal.

Okay, confession; I did want Rikako in Morning Musume, purely because she is the Golden Girl of the Kenshuusei right now... er, was the Golden Girl. Once Karin was added to the roster of Juice=Juice, it was clear that Rikako was one of the fan favourites for the Western community of Hello! Pro fandom when it came to the Kenshuusei, and why the heck not? She's cute. She can seem to sing quite well, even if she's not the best of the best yet (shoot me, I don't care, that's my opinion) and she has personality it seems. She's a crowd pleaser if anything, so of course, a lot of people wanted her to debut.

They just wanted her to debut in Morning Musume, like I did. So I have a feeling some fans are disappointed that she was added to S/mileage, because seriously, S/mileage? Yeah, my thoughts exactly. But, after finding out that she was instead added to one of the few groups in H!P I choose to ignore, I'm actually happier to see her in S/m than I am Morning Musume, simply because it makes a lot more sense. Well, it does to me at least, because Rikako may be talented in her own way, but I think in MoMusu she would be swamped... it's clear that she would be pushed in S/mileage, because much like C-ute now, and to a degree Juice=Juice, there is actually a fairer distribution in the amount of promotion the members get.

That, and all of the members of S/mileage are actually talented in either singing or dancing; not everyone is in MoMusu. In S/mileage, I feel like Rikako, Maho and Mizuki will actually be able to keep up with the girls, or be pushed to their limits. MoMusu, however amazing I find them, would probably force the girls to lag behind a bit, even if the girls of MoMusu have improved increasingly over the course of the past few years.

So yeah, I'm happy that Rikako, Maho and Mizuki are in S/mileage. In fact, I think their addition will boost the group up quite a bit more, image-wise or something like that. These girls, I hope for them to improve S/mileage, though the group has been improving already with these past few singles... I just hope that their image does not suffer again, because damn, that was a sucky time for S/m. They really were flopping around like Magikarp during their identity crisis.

Alright, enough about what I think, feel... all those emotional words, let's shun them! It's about time to meet the members! Let's GO!!! 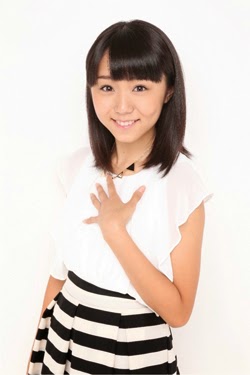 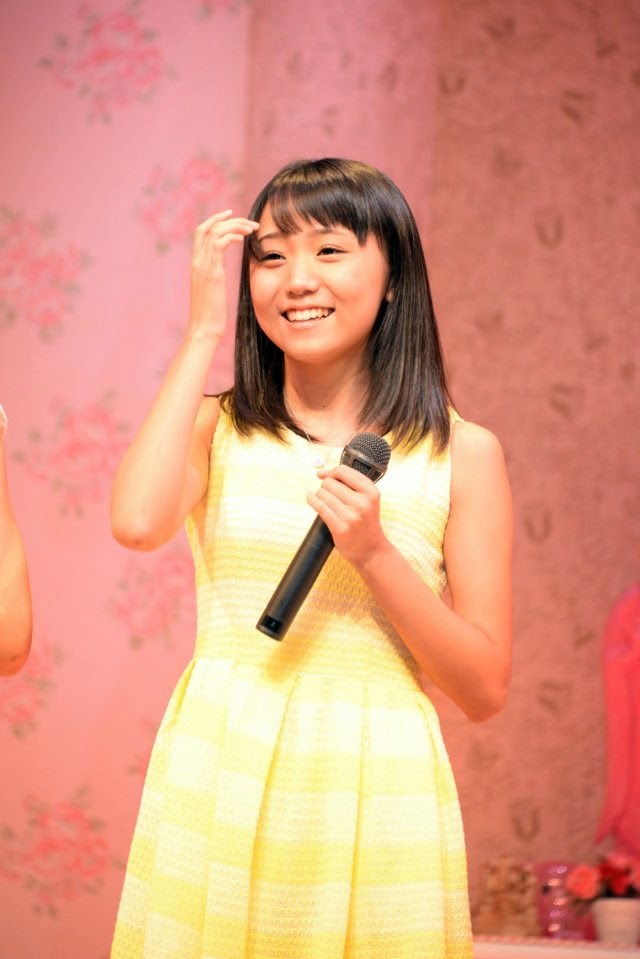 Name: Murota Mizuki
Nickname: Murotan
Age: 16
D.O.B: June 12th, 1998
Intriguing Facts: She won't lose to others in Pantomime or robot dancing. In the past, she believes she was a sloth.

Okay. Wait up. THIS KID IS 16!? How in the Hell is that possible, I mean... she's adorably tiny! In fact, she looks younger than Rikako who, is in fact, the youngest of the new S/mileage trio! Okay, I can't pin an age to someone just because they look like they're 10, I get it, but whoa... she's 16. That's weird. She is one of the most adorable 16 year old's I have seen, at least. Damn!

Actually, based on looks alone, I feel like Murotan (I've heard of her vaguely; she seems to be a crowd favourite) will become my precious one in S/mileage, alongside Kanananananananana. We're in the early stages though, my mind is set to change eventually, but based on how she presents herself in the images above, her adorable smile and also her adorable height of shortness, I rather like her. She's sweet looking, one of those girls who is set to shine with... well, her smile.

Also, those eyes. Those eyes sparkle like the 4th of July.

... And that is all I have to say regarding the cute little ball of eyes and shortness that is Murota Mizuki.

Murotan. I want her to inherit the colour Light Pink from Yuuka... ¬.¬

By the way; she looks a tad like Minegishi Minami. Just sayin' 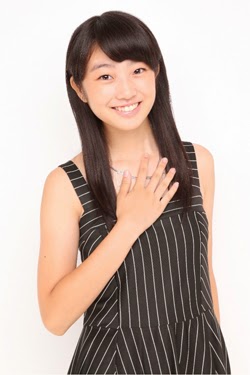 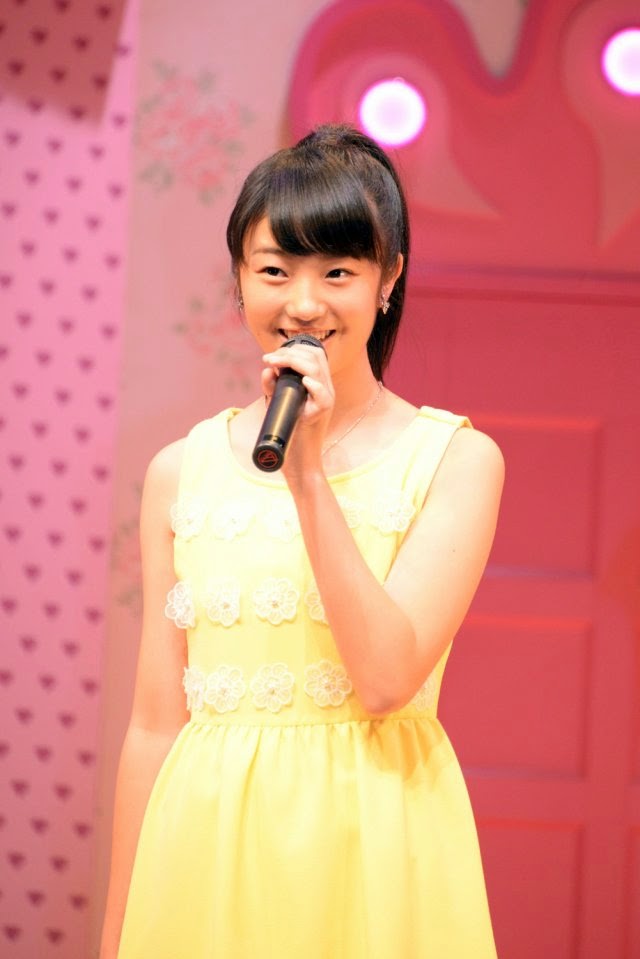 Maho. I have no clue about her, and that's because 1) I don't follow the Kenshuusei programme much, and 2) because she's fairly new and already, she has been added to a group! Like Tomato-chan of Juice=Juice (Kanazawa Tomoko, people!) she debuted rather quickly; there is promise there, it seems, because if there wasn't, she would not have been added. Maybe, for Tsunku, this is Project-chan; his underdog of S/mileage, because already, S/mileage is a pool of talent in the vocal area... the last project was possibly Kanananana, and she pretty much improved herself in leaps and bounds! So potential Project-chan, here we come!

From what I have seen of this one in images, and on youtube, she's pretty damn adorable! Actually, I have a feeling that Maho will become my favourite member of the 3ki in S/mileage, because I know that my opinions on members change like the seasons of the year, and I know I like Murotan right now... but Maho has something about her that I know will pull me in. Like... she's derpy-cute, similar to Akari, her smile is infectious... she is just adorable, actually.

I have a feeling this one will grow on me, and I do look forward to what she brings to the S/mileage pool! Maybe a ballet-based single, hm?

Maho, the girl I peg to be my favourite. Also the one I want to inherit a blue colour, but because Nyon is still around, I have to imagine her with Light Green, or even Teal. 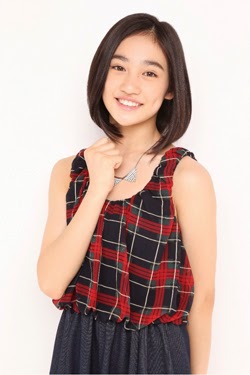 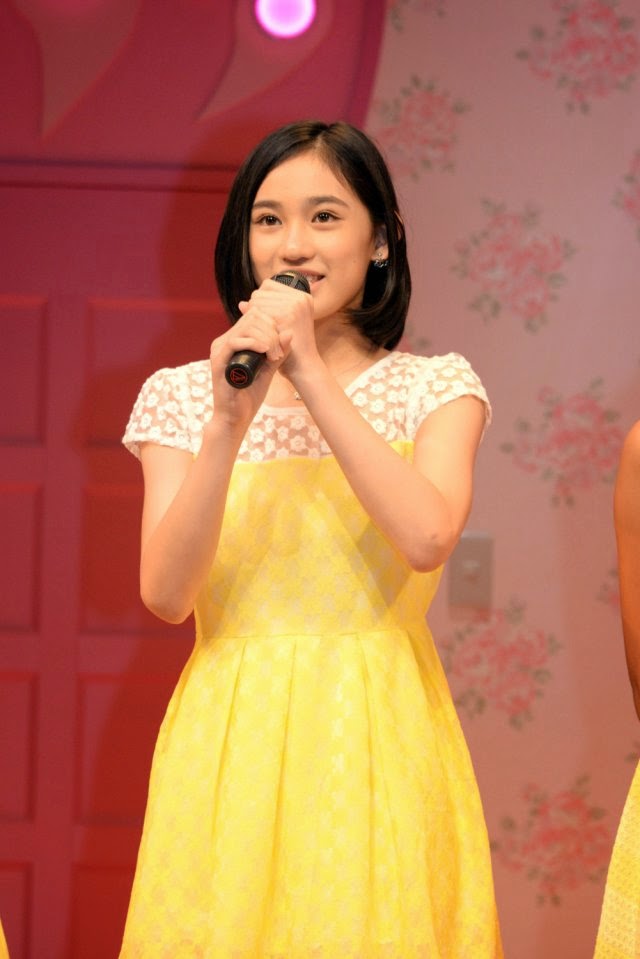 Name: Sasaki Rikako
Nickname: Rikako
Age: 13
D.O.B: May 28th, 2001
Intriguing Facts: Originally a member of the group SCK GIRLS. She is Half Filipino. She is the first S/mileage member born in the 21st century.

And finally, Rikako, the leading-lady of this all-star cast of nooblets, and the one everyone is rooting for in S/mileage. She's the girl who people are going to have mixed feelings on, if anything, because she's clearly the girl everyone has wanted to debut for a while... albeit, in Morning Musume, not S/mileage. But I look forward to what she brings to S/mileage, in her vocals (dem husky tones) and also her mature looks. Seriously, for a 13 year old, she probably looks the most mature of all the members in S/mileage right now. So yeah... I am anticipating how they will adapt her image within the group, because she's cute, but mature looking.

Bitch, are you saying she looks old!?

As I said prior to this part of the post, I am glad Rikako is here rather than in Morning Musume; I think she will grow well in S/mileage, maybe even pick them up from their rut they are currently getting out of. I don't know the extent of this kids talent, other than that she seems to be a decent singer, but I look forward to seeing her in the group and watching her perform on-camera. I want to see her shine, I really do, and I have no doubt she will be handed the silver tray of spotlight that is set to come her way in her up-coming debut single and any other single after that. Yes, I want the other girls to have spotlight too, especially Maho now that I have fallen in love with her, but I have no doubt in my mind that Rikako will be pushed to high Heaven; she's the Golden Girl.

Everyone is rooting for her, well most people are, and all her fans from the Kenshuusei days have congregated to the S/mileage seats it seems, or are unhappy about it. Well, again, speculation. Let me reaffirm that this is speculation!

Rikako, the chick I want to inherit Orange, because she seems like an Orange kinda girl. I will actually cry if she is given any other colour!

Clearly, she is the one we have to look out for as the new centre! Ah, it will be so nice to see Nyon nowhere near the front... oh I could wish... 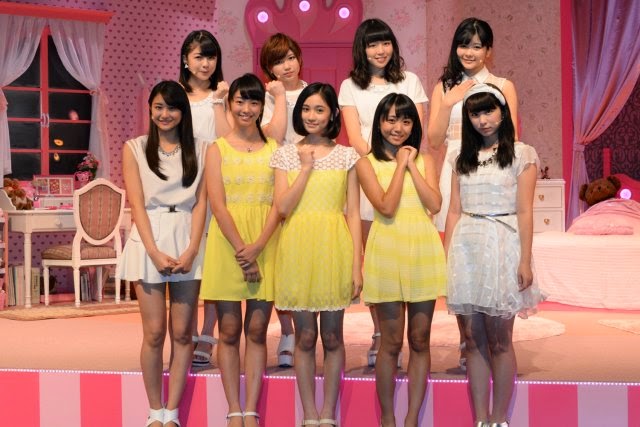 New members; always surprising, and always a mixed bag of reactions, even to the current members of S/mileage! Seriously, I am rather happy with this new lineup, though you can't say the same for the rest of the group (look at Nyon, she's fuming!) but yeah... I actually have some hope for S/mileage now! There is promise here, there truly is, in Rikako, Murotan and the barely-known Mahochi! They will bring something to the plate, surely, and yes, I really do anticipate it!

Nyon may not like this setup, or Akari or Dawa and possibly my Gorilla-chan, but to Hell with them! I love it, and I really do wonder what their debut will be like! I am EXCITED! ARE YOU EXCITED, TOO!?

... Now, when is Nyon announcing her Graduation?

Until next time! Chiima, over and out!