Hoo boy, it's been a while... so long, that I don't even know where to begin! EEP! It's scary, getting back into writing!

Okay, let's just GO! Break me in by jumping into the deep end, as per usual. Sounds about right... 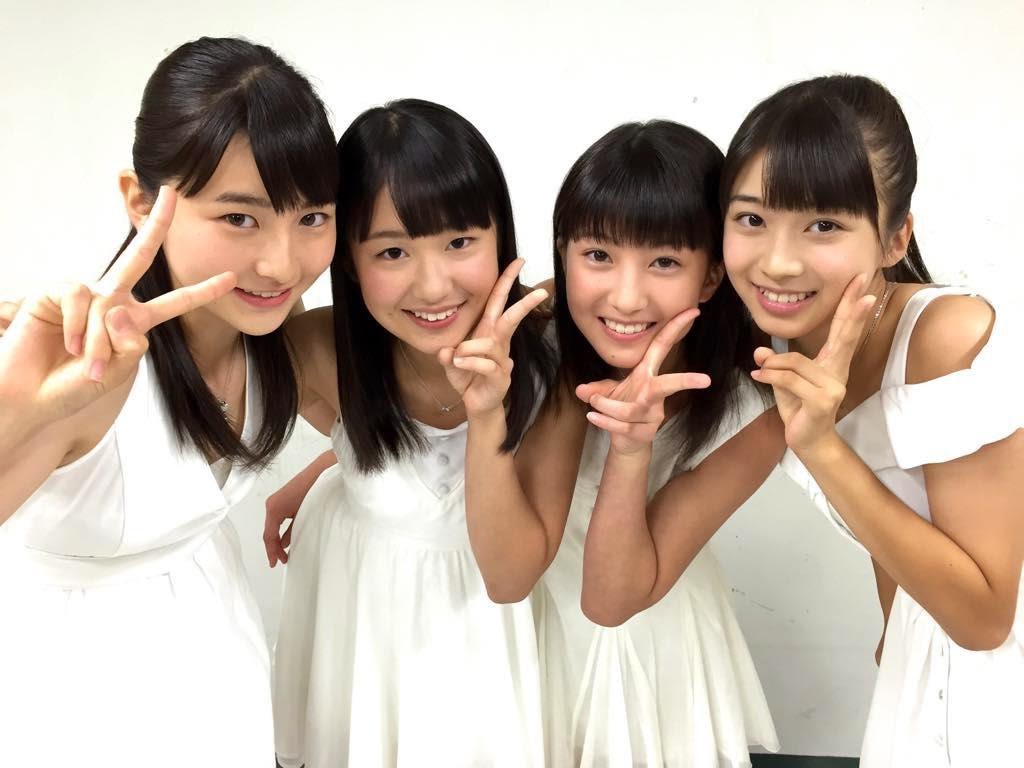 Holy Heck New Generations Batman! Who expected four new toddlers to join the ever-growing collective that is Morning Musume!? Not a lot of us, that's for sure. In fact, I think a good chunk of us were praying for two girls, possibly three, but four? NOPE!

But yeah! Four new girls!? Seriously, I'm happy with this number, though I didn't expect it really. It seemed like Tsunku would never really go over the number 12 at all, but once Sayu leaves the MoMusu ship, we're left with 13 members. Wow. Odd number, indeed. Good thing I like the number 13. For others, it is seriously unlucky! Hopefully 13 will be a good number for MoMusu, however!

Also, yes, I am indeed looking forward to what these kids have to offer towards Morning Musume in terms of performance, personality or just plain cuteness. Who knows? Maybe we have a hidden talent who can finally knock Riho off her pedastool, and actually give us good vocals in the front line in terms of high pitched songs! Seriously... we need someone who can sing those terrible high notes well. Leave the low songs to Riho, she actually can sing those ones.

Enough bitching about current members though! Let's take a looksy at the Nooblets! You know, the ones y'all have been fawning over since they were announced? 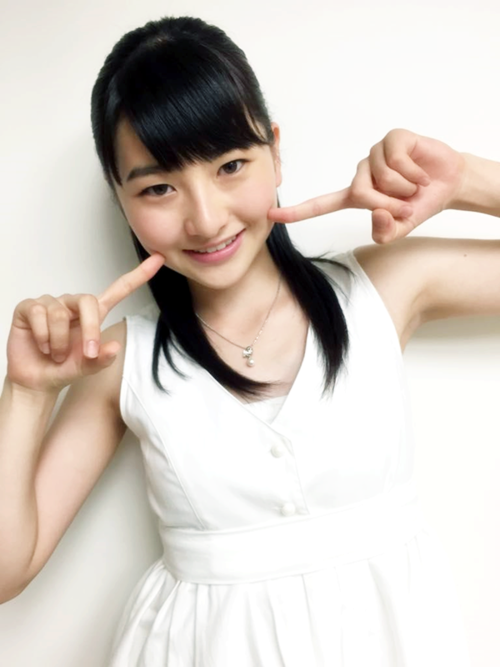 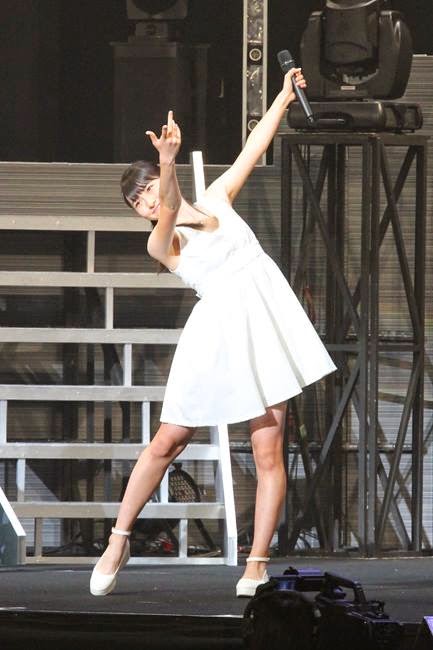 Name: Ogata Haruna
Age: 15
D.O.B: February 15th, 1999
Intriguing Facts: She competed in the 2013 Skating competition. She is the first member to come from Osaka.

I am not ashamed to say that, already, I feel like this one will become a favourite of me. Why? Firstly; Haruna. Duh. That name is a given, if anything, though I was surprised to see another Haruna come along into Morning Musume. Still, whatever. HARUNA! Now I have a Harunan and a Haruru. And, secondly; there is no second. She's just grown on me like a tree.

And just sayin', I may get confused with nicknames from now on. We're back to the Ai x Aibon thing in MM here, but with two Haruna's... yaaaay!

Anyways... Damn, this one is gorgeous! I'm surprised at how lovely this one looks, actually. Though truthfully speaking, I didn't actually care much for Haruna at first; I thought she was plain looking, a tad boring even, but I didn't dismiss her. I just preferred... well, someone else. And then Haruna grew on me like a surprise. That, I did not anticipate.

Then again, I never anticipated liking Zukki at all, either. She was my least favourite of the 9ki originally. I always thought I would be a Riho fan. Look at how well that turned out... These things surprise us, don't they?

But yeah. Haruna. She really has something about her. She looks so demure and sweet, plain and... well, bland, like Mizuki, but I can see the growing beauty of this girl! Also, them legs. Damn them legs!

Actually, whilst I'm on the leggy but of this topic, I must confess that I have a feeling this generation is the gen of Legs! Legesis! It's like S/mileage and their leggyness, but now in MoMusu! FINALLY!

But yeah... Haruna. I like her. She's kinda my favourite right now. Cute. Legs. Pretty smile. Potential to look less bored in the long run. That amazing name.

Also apparently she's fucking nuts. She has a Twitter. She's funny, trust me.

Ogata Haruna. The girl I imagine to have the colour peach. I will cry if she is not given peach as a colour. 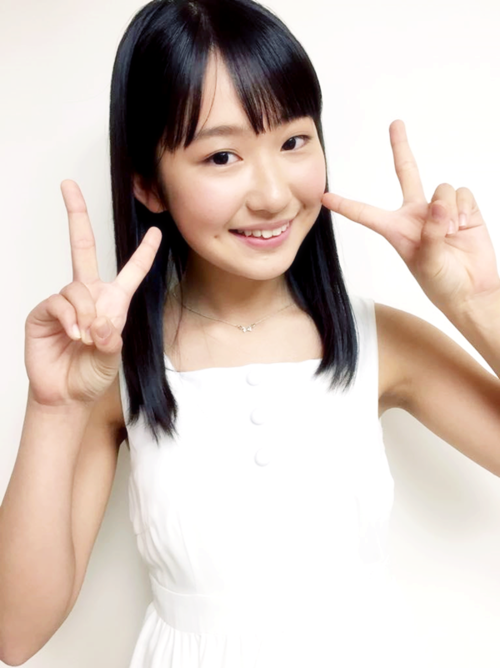 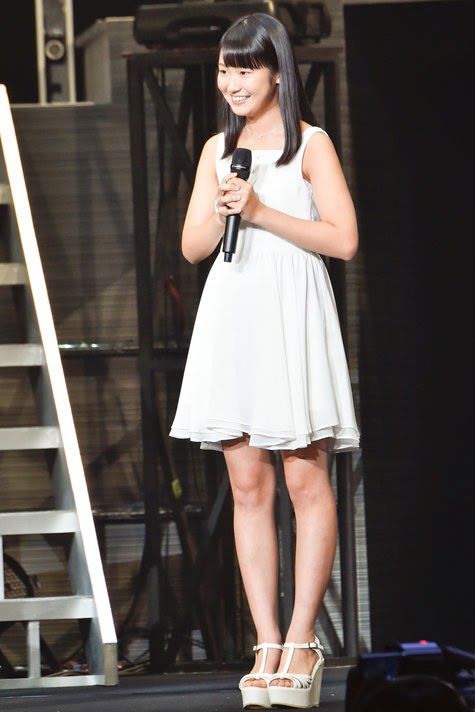 Name: Nonaka Miki
Age: 14
D.O.B: October 7th, 1999
Intriguing Facts: Miki lived in the United States for 8 years, and speaks both English and Japanese. She is the first member to come from the Shizuoka Prefecture.


This kid. This kid. I swear, she is the one the foreign fans, including myself here, are going to absolutely bloody adore because, gert damn, she speaks ENGLISH! We haven't had an English-speaking Hello! Project member for yonks, so this comes as a wonderful surprise to many of us, I am sure! Also, she's pretty darned cute, and I know that already quite a few people I talk to absolutely adore this girl. Yeah, I can see why.

Admittedly, at first, I thought 'meh'. I was a total sucker for Maria, but honestly? I think Miki could grow on me. She looks like she's going to be damn beautiful once she's properly polished with that Hello! Project magic. She's cute now, don't get me wrong, in fact she's the prettiest member so far of the Golden Generation, but damn, I think she's going to grow into something more and really shine when the time comes. Seriously. She's. Bloody. Gorgeous.

But yeah, this kid, she has charm to her, and the lovely perk that she can speak English. I think this brings a lot of hope to the foreign fans, because it means we have less of a barrier in a way now! I swear, this girl will become a fan favourite to the Western part of the fandom for obvious reasons, but also because she seems seriously endearing. I am excited for Miki, if anything, and I want to see what she can do!

Miki, the English Speaking one. The kid I want to harness the Power of the colour that is Light Blue. I like her. 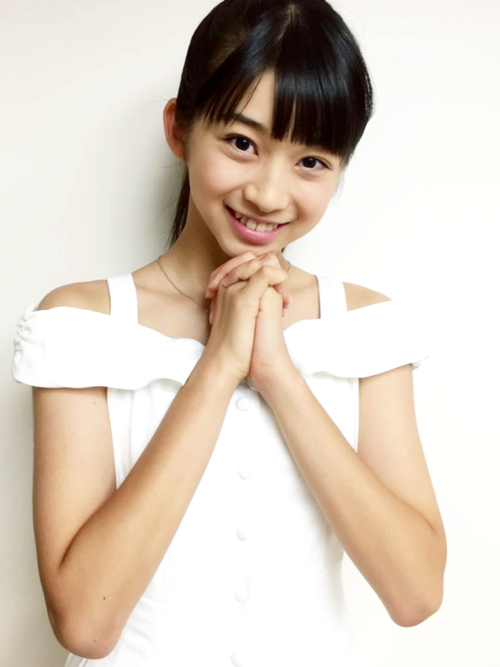 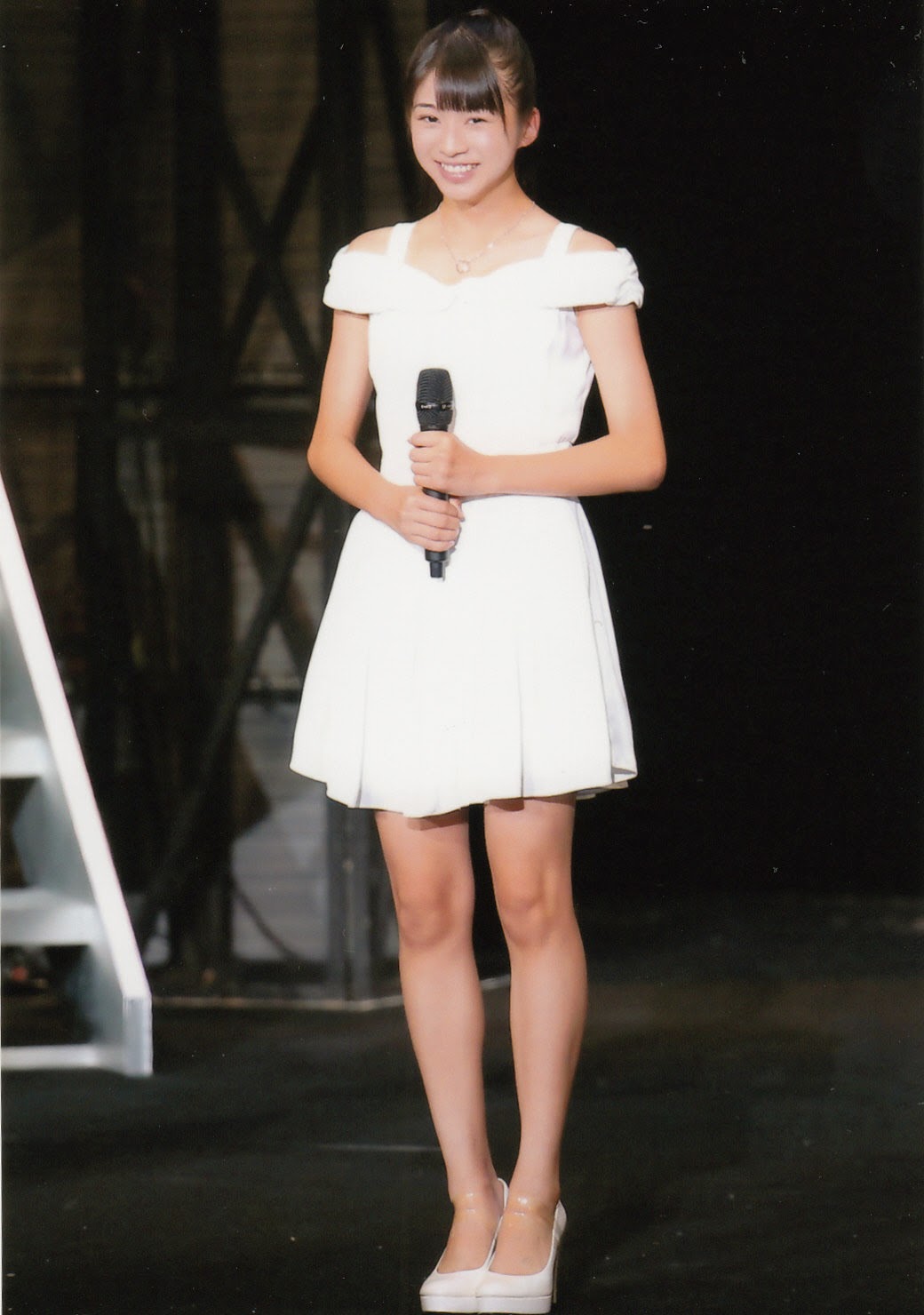 Name: Makino Maria
Age: 13
D.O.B: February 2nd, 2001
Intriguing Facts: She is one of the first MoMusu members to be born in the 21st century, along with Haga Akane. She wants to become an Idol like Michishige Sayumi.

Can I just say that I am seriously surprised that this kid is only 13? Like, seriously? 13, and already, you have legs like a sunflower stem! WOW! Once again, this reinforces the whole 'Legesis' Generation that is the 12ki.

Ahem... Maria, that chick that Shige seems to pine after from the trainees, or formerly of the training programme, now in Morning Musume. The kid who seems to be the 'pretty' one of her generation, and originally the girl I actually liked! She sure is cute, isn't she? And given that she is in the Kenshuusei, I am wondering what she's like as a performer, in both singing and dancing. Admittedly I have yet to hear her, but honestly, I hope she (or Akane) is good, or even one of the two Unknowns, because we need some more talent in Morning Musume, singing wise... well, we need more talent that is pushed, and I sure hope Maria is pushed, one way or another.

In fact, I hope they are all pushed but Miki is my bet for the one being pushed most.

But yeah, I can't say much else about Maria. She's adorable, her legs are long, and I look forward to what she brings to the plate! I just hope she isn't as boring as she is cute, like Mizuki. I would like some more intriguing members, thanks.

Maria, the girl waiting in line for Sayumi's Pink colour. I believe we are all hoping that she inherits it, to be honest. 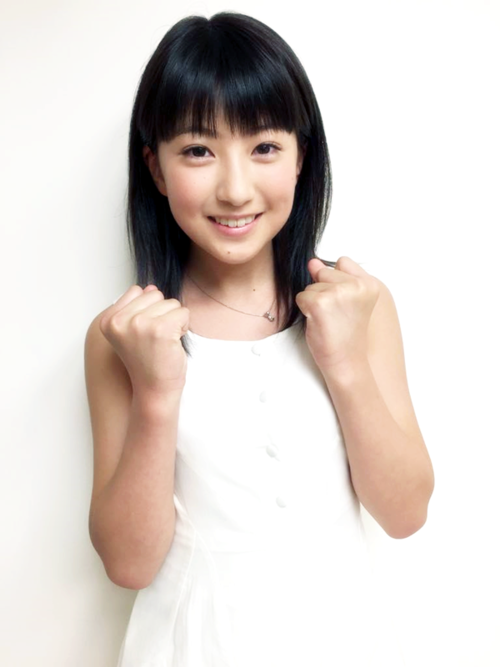 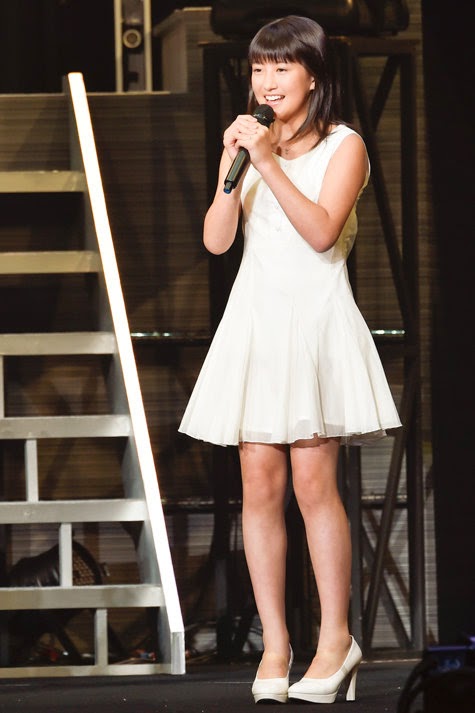 Now, Akane. The second Kenshuusei member to come into the Golden Generation, which is pretty surprising, if you ask me; we usually get one Kenshuusei member, not two, so Akane is a pleasant surprise because obviously, Tsunku saw promise in both her and Maria. Maybe he wanted them to grow in the group, who knows? Either way, I'm glad he's using the trainees. These girls kinda need to be shaped in groups, not the programme most seem to drop out of.

Anyway, back to Akane; she's the one I peg to be the boring one, the girl I won't look at. All the more reason to find her intriguing, because honestly, I thought that Masaki was someone to ignore, but she turned out rather intriguing. Same with Eripon, and Sakura actually. So yeah, because I want to overlook her, and from past experience with dull looking members, I'm probably going to have to watch out for this one, whether it is in personality or her talent, or how endearing she is. You never know; this girl could seriously be the diamond in the rough, the one who comes out on top in personality, looks or talent later on down the line. She could be the Masaki of the 12ki generation.
Not that we need another Masaki, because Christ, we do not!

Anyway, Akane... she actually seems interesting, from her Trivia that is around the internet! She seems rather mature for a 12 year old (it's weird knowing that, for sure, Duu is no longer the baby of the group! GAH!) and she seems to be pretty level-headed from what I have read on the Hello! Project wikia. Seriously, this girl seems to know what she wants in her future; we need some maturity in the group, because whether you like it or not, I don't think that MoMusu actually has a true mature figure anywhere in the group mind-wise outside of Sayumi, and she graduates soon! So, if she is as mature as she seems to be, I actually look forward to seeing what Akane brings to the plate for MoMusu and its future!

She looks boring and plain, a little like the Underdog actually, but boy Akane could become an intriguing member!

Haga Akane, the member who I think would suit Dark Purple as an image colour! And also; LEGS!

These kids have better legs than I do... (cries) 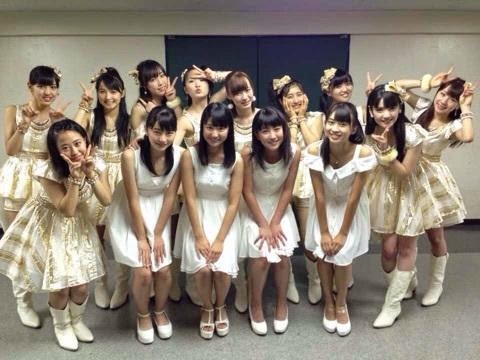 Honestly, I am really excited for this new generation! I wasn't that excited when I first saw the news, but I put that down to the fact that I was still settling into University life at the time, but a day or so later, I really did feel like it was real. I felt happy for the group, and I was really delighted with the results; the girls they have picked, they were chosen for a reason. Every MoMusu member in the groups History has been fantastic, one way or another, and I have no doubt in my mind or my heart that the 12ki will also be amazing.

It's weird to think that the group will soon be at a magnificent 13, though right now it is at 14 (hello, MoMusu '14! I see what you did there, Tsunku!) but I honestly do look forward to the future these girls have with Morning Musume '15 next year when they debut (eep!), and I honestly can't wait to see them in action! It's great that we now have four new members to fawn over, fresh faces to become attached to and the like. It really does feel great, and whilst I am still getting over the fact that the group is creeping into bigger territory again, I am really... well, elated! Four new members! EEEEEEEEEP!!!

With our new members secured, Shige's graduation looming, and the end of 2014 nearing, a new era of Morning Musume is truly dawning! This is the Golden Generation, and it is time for a brand new chapter in the Morning Musume Legacy! Are you prepared for it, because I sure am! The group is refreshed, and they are raring to go! Bring on 2015, bring on the Golden Girls! I am ready for them, and yes, I am bloody excited!

Now, let me ask you this; ARE YOU EXCITED, WORLD?

Until next time~ (and hopefully it won't be for too long, because, y'know... this was too long!)