As always, my opinions will be my opinions - you don't have to like them, love them, or hate them, but this is my voice, and I will speak with it. You enter this blog, then you enter a domain of whatever the heck I wanna say. Got it? GOT IT!!!

So we've had some controversy a la Avril Lavigne lately, and it isn't just in the J-Pop community... anyone wanna say Hello, Kitty?

Good Lord, I care about this more than I care to admit. URGH!!!

There is a hullabaloo right now in the world of Music and Videos, with many running around in a tizzy about Avril Lavigne's latest little ditty Hello Kitty, and all of its apparent offensive glory. Right down from the candy-infested Colour bomb of a video to the straight-faced Harajuku Girls Asian women dancing enthusiastically (read: with the excitement of a sleeping pigeon) this is the video that has everyone talking; it's bad, it's offensive, and it's oh-so 'weeabo', meaning that this is the be all and end all of the world, for some reason.

... Okay, what am I missing here? Like seriously... what is everyone having a flap about? 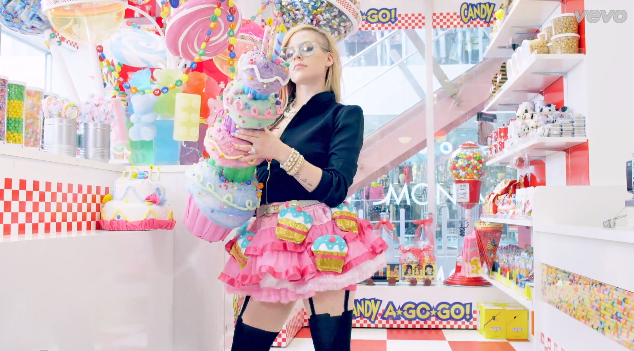 Off the bat, how is this video offensive? Yes, she features Japanese girls in the video and apparently 'fetishes' the fuck out of it all too, and yes she wears a cupcake skirt and speaks in broken Japanese - but tell me what fan doesn't at some point in their life as a fan of Anime/Manga/J-Pop? I mean, calling her out to be racist because she's doing what a majority of us fans do in life at one point in time is like the pot calling the blasted kettle black, isn't it? Also, correct me if I'm wrong, but isn't the look of a Japanese Idol made a fetish of plenty, like their innocence or sexy bodies? Yeah, that's what I thought.

Seriously, if you're going to finger point Avril for doing what a good majority of companies already do AKS, Hello! Project then maybe you need to take a good look at the Japanese Entertainment industry again and come back for a second good look. 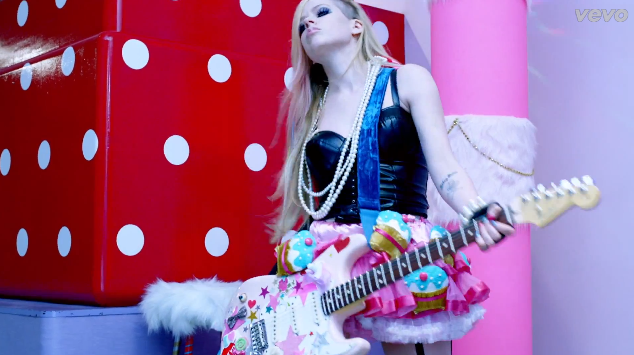 I also feel like we shouldn't be jumping to the gun here when other artists have previously done something similar to this in their videos or songs, singing in either broken Japanese or featuring Japanese girls/elements to their videos. Anyone remember Gwen Stefani? Harajuku Girls? Jesus, she sang a song about them and everything that was duller than this song is! Also, don't forget Beckii Cruel and her short-lived Japanese Idol run; this isn't the first, or last, video that has come from an English-speaking artist that features the Japanese look or culture. So going on that this is terrible, racist and weeabo-ish is like saying other artists are saints regarding how they may have done their videos. 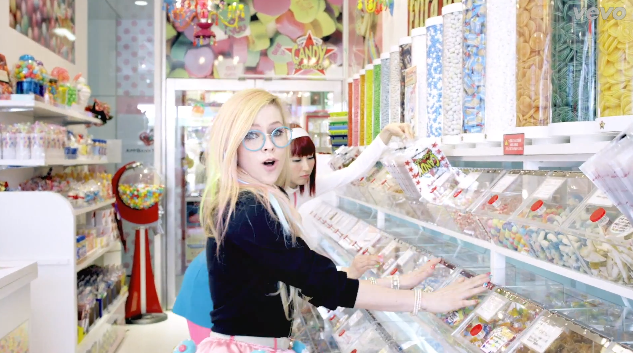 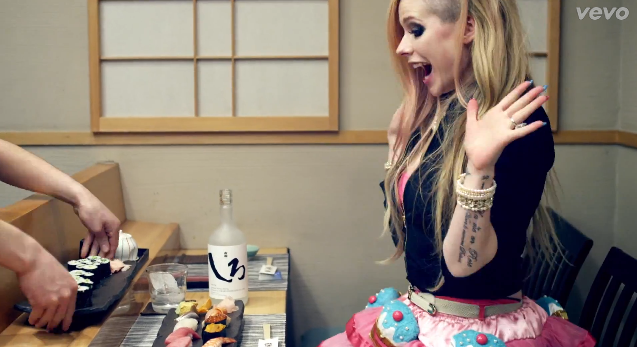 Honestly, other than all the deranged hype over this video, I really don't mind it that much. It's not an amazing video by all means - sure, it's an explosion of cupcakes, colour and over-the-top excitement on Avril's part, but otherwise it's very boring and very try-hard, to the point where the 'enthusiasm' Avril pulls off appears fake and over done. Don't get me wrong here, because she could be having the time of her life for all we know, but from what I can see it all seems like she's putting it on. That said, whatever. It's not like I've ever done an over-the-top reaction to something...

Oh wait, but I have! Still though, if that's what she wants for her video, or what the director wants, kudos to them and all that jazz. That said, the video is rather boring aside from the fuck-tonne of colour thrown in there. The rest of it though? Stale enthusiasm that I want to pass on.

Someone chuck a cupcake at me! 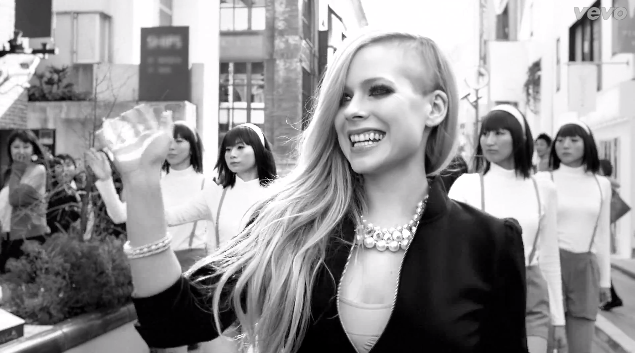 The video, in all of its un-enthusiastic glory, has an even worse song accompanying it, though a bloody catchy one at that. It's like this cluster-fuck of shit EDM borrowed from Morning Musume's One Two Three, which I wish was on right now Holy fuck rather than this tripe. The lyrics are just as awful, and not because of the broken Japanese, but because of everything written in this song. It's. Just. Shit.

It all reminds me of why I abandoned English music in the first place, actually. It's terrible!!!

Still, the song is a personal preference thing here, and what won't work for me will probably work for others. Seriously though, don't write out this song for the pure fact that it hosts shitty lyrics and a shitty backing track, or because people are ripping their hair out over it being 'racist' or 'weeabo' that word makes a big appearance today... because maybe you'll like it; I just don't, however it's stuck in my fucking head and I am repeating it right now. ARRRRRGH!!!!

Hello Kitty has a shit song and a boring MV that is filled with so many try-hard actions and emotions, but once you get past the 'she's so RACIST!!!' or 'She's a weeabo!!!' thoughts and ideas, then the video really isn't as bad as people are making it out to be - it's just bland and dull aside from the colour explosion of the product-placement store that is Candy A-Go-Go and Avril's Cupcake tutu. There really is nothing much to it, in both song and video. People are just reading far too deeply between the lines, and creating their own story as they do so if you ask me.

Avril just so happened to post a video that didn't agree with a good majority of the world, but whatever. Let her do her thing and get over it.

Now, time to numb my mind with huge doses of alcohol and the shit-storm of One Two Three... urgh, I've stooped so low in my life.