Of Revivals and Disbandments

This may all be old news by now for everyone, but I have been taking days off from the internet again (only for like, a day or two... don't worry!) so I'm talking about the news a little later than everyone else is. But hey, who says I have to be on time? NOT ME!!!

Of course, given I was away there just had to be some big news buzzing around the Idol world that we all know and love so dearly, shocking or surprising the fans who read about it. Upon finding out one piece of 'big' news, I was pretty surprised by it but I can't say that I really jumped for joy either. The other piece of news came as shocking to some fans I think, but I was unfazed by it because I had read about it a week or two before.

... Let's get to the rather surprising news, shall we?

Okay, so Country Musume is basically coming back and they are holding auditions, as told by Satoda Mai, the last remaining member of the group. This was pretty big news on Facebook, with much excitement from the H!P fans because, well damn it's a revival of a very old unit! Why shouldn't we be excited?

Okay, so maybe I'm not as excited as everyone else is, but I will say that I am pretty damn stoked about Country Musume being brought back. That was an era of Hello! Project I was never a part of, and whilst I haven't really delved into Country Musume much (my sister adored them for a while, and tried to get me to like them too) I did find them good, though the better songs of the group were during the times Morning Musume members supported them in my opinion... but to know that new members will be reviving the group does make me a little more interested in Country Musume (2.0) and what it will have to offer for us.

Of course there is a little bit of scepticism about what this group will do and if they will produce new music or not; if they are anything like the current Satoyama and Satoumi units, then they may not do much other than produce one single, or if they are like the UFP acts, then they will merely perform instead of producing music videos and singles. Or they could be a part of the H!P boat and produce singles, videos, do concert venues and basically be Idols, which would be nice and is probably the option most fans are rooting for.
But there is also the added kick that the new group members must be willing to do farming and other agricultural activities, which allows me to think that maybe this group will do a little bit of Satoyama? Who knows, and given the Satoyama show is dead we wouldn't see them do anything farm-like anyway, but it would be fun to see a group specifically catered to farming that would hopefully stay in the H!P family and show off their farm and land skills on TV, or heck, create their own show! Yeah I know, Satoyama 2.0 and all, but Tsunku's in a recycling mood right now so why the heck not?

To be honest, I find the idea of reviving a dead group more interesting than exciting. There are many ideas and opportunities to toy with here; Country Musume (2.0) could be a part of the soon-to-be-finished Satoyama project with H!P, they could do more in terms of working around and in the land of Japan and even hold fan events where they plant their own crops, till the land and so on so forth, and they could do farming music videos! That would be interesting, at least a little more fun than the cookie-cutter PV's H!P release all the time during this era (hi, MM'14!).

That all said and done, I am happy for Country Musume to revive, given it was still around but dead for a long time. It seems like Satoda Mai just wants to keep it going, even if it is for the sake of Media attention. What they will do is up to Tsunku or UFP management or even Satoda herself, but hopefully they will actually have activities rather than laying around dead for a while like the H!P Eggs before the revamp into Kenshuusei or laying like doormats waiting for things to happen like with Aika. I don't know, I'm not Tsunku or Mai or a UFP manager, but hopefully they will do something with this group and make them exciting.

It's a fun idea, and hopefully it will work. My only problem with these auditions is that the age range is once again fucking stupid, but I hope we'll get a few older girls in there to spice things up a bit. Imagine, 10 year olds doing some country labour for the sake of being Idols?

That all said and done, let's get onto the less-than-surprising piece of news, shall we? 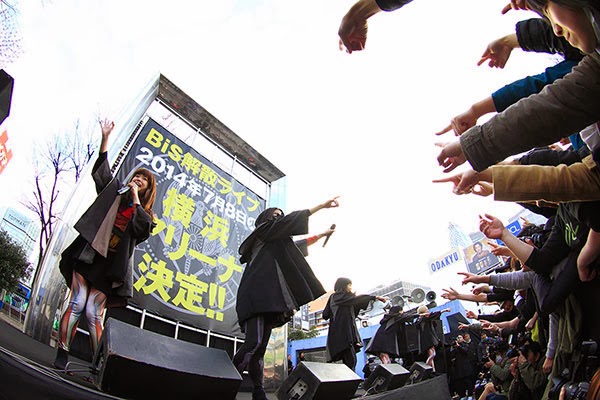 Okay, so I actually found this out a week or so ago, and I was very shocked when I saw the post that said they would, at some point this year, disband and part their ways as members. It wasn't until a few days ago that the article popped up with the confirmed date and venue they would disband. Sure, it's not Budokan, but damn they are still going out big.

The thing is that I don't even watch BiS much or listen to their music, but they still manage to surprise and impress me like the Idols I love do. I am rather intrigued by them I believe, which is why I so shocked when I realised that at some point in 2014 they would disband. I didn't expect it, then again you really need to expect the unexpected with BiS, and this was extremely unexpected and I am pretty sure that many fans are extremely sad about this right now, because I know I am. And I don't even follow them as a dedicated fan, just a 3rd part person who sometimes sees something she likes. But damn, I am rather upset by their disbandment, and now that it's confirmed I have that date looming ahead.

This group is unique and they are strong, so it's a shame that they are going out so early on in their career, especially when they were just starting to get recognised and known more by the public for their weird but wonderful ways of performing. Their originality is their strongest factor for them, and they are a great group who have something so special about them, and they are so hard to place it's amazing... but they are going off on a high, which is a good thing as well. I would rather BiS leave on a high note than a low note, because they deserve that. They have met their success, and whilst they may not be going to Budokan to disband like they had originally planned, at least they have decided to disband at Yokohama together for whatever reasons they may have. They know what they want, and they know that this is the place for them to disband.

It is really sad to see them go, and in a way I am sad that I didn't pay more attention to them as a fan or a standard listener, but I am glad that I was able to find out about them and learn about them. They are a unique group who have made a stamp on gross and weird Idols, and I highly doubt that anyone will be able to outdo the weird and wonderful world that surrounded BiS.

That is pretty much all I have to say regarding the news for these two big announcements, and whilst I am leaving this short, I will be going now. I have not been sleeping well lately so I am basically going to go and rest... I hope I can bring you a Digest tomorrow, but really, I have been so tired lately I won't be doing it tonight XD Apologies >o< Lame excuse is lame, Chiima!!! GAWD!!!

Toodlepip and bye bye, take care and see you again!