Yamakawa Risa has been Expelled, Chiima Thinks and Feels 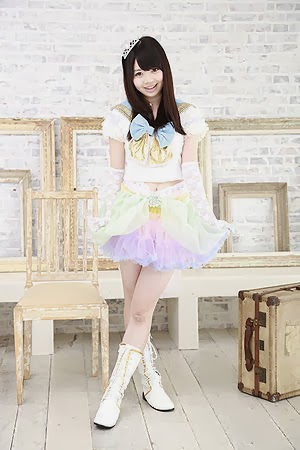 On January 10th, it was reported that Houkago Princesses 4th Generation member Yamakawa Risa, the Chairman of Classical Ballet, has been dismissed from Houkago Princess and the company Princess Music as of January 8th, 2014.

The reason for Yamakawa's dismissal is due to a breach of contract, as she met with a fan the day after she had asked to suspend her performances until January in order to get treatment for her foot.

Here is the full announcement translated in English, with thanks to Steve of Selective Hearing. You can find the original report here.

4th Generation member Yamakawa Risa was taking leave from performance activity for treatment of her foot near the end of last year, but because of a rule violation, as of January 8th, she was dismissed from Houkago Princess and our company.

To all of our supporting fans, we regret to inform you in this manner.

A few days ago, there was an action performed that was deemed inappropriate, where Yamakawa interacted with a fan outside of work.

Because of the treatment for her foot, she was scheduled to miss live appearances including the One Man Live on January 12 and individual handshake meeting on January 13 so she could rest, since, at the time, she could not even walk properly. She put in the request to leave for this period of time and it was accepted on grounds that she return to work with peace-of-mind, but Yamakawa was found meeting with a fan the next day.

At first, for fact checking purposes, we tried to speak with the fan directly, but after finding out about this, we received a mail from Yamakawa stating her intention to resign from the group, saying she wanted to resign for a different reason, and soon after, we gave up trying to contact the fan after he fully stopped communicating with us.

Since the fan broke communication with us, we couldn’t confirm anything with him, and given the information we had, we had no choice but to take action against Yamakawa for breaking the rules as a member of Houkago Princess and causing a breach of contract with us as a company. Breach of contract was based on non-delivery of her duties as a member and any further communication with Yamakawa was handled directly by our lawyers.

We strictly prohibit message exchange and communication between members of Houkago Princess and fans, whether it is through blogs, Twitter, or through letters sent to us directly. Even if you send letters, we cannot give you a direct response from the members.

We also cannot share any of your personal information with the members, even if you send it in letters to us, whether it is your address, phone number, e-mail address, LINE ID, etc. Please note that if you include any of this information in your letters to the group members, we will not deliver it to them.

If we find that this rule is broken again, not only will the member in question be banned from all activity with Houkago Princess and dismissed from the company by our lawyers, but we will consider taking legal action against the fan in question as well, and on top of being banned from attending any other Houkago Princess events in the future. Thank you for your cooperation and understanding.

We truly apologize whole-heartedly to everyone who has supported the group and Yamakawa for the last year, and we hope you can still continue to support the other Houkago Princess members in the future, and we’ll do our best to continue our activities.

Also, if you have a cheki ticket for Yamakawa Risa, please come to the corner of the area where the event is being held and let us know that you have one and we can exchange it for another member.

And so another HouPri member bites the dust... great.

I am really shocked by this announcement, because I liked Risarina a lot. She wasn't my favourite member, but she was a member that I liked to hear about and see, so to find out that this has happened... it was shocking.

However I was even more shocked by the entire report once Steve had kindly translated it for me when I asked him if he would. Even Steve was shocked I think, because as he said, this is pretty harsh, and as you can see from what has been written, Management are taking things to a whole new level in Houkago Princess, and it really upsets me.

I already knew that management were monitoring the girls' Twitter, e-mails, letters and blogs in case another 'Hitomi' incident happened, where one of the more known or popular members was found to be meeting up with fans and exchanging messages, but to bring the law into it is kind of intense and really really harsh. It's shocking, and as I said, it really upsets me and makes me feel uncomfortable as well.

I understand that this is what being a Japanese Idol is about; being unattainable and basically being there as an object of desire for fans, someone to like and look up to, or someone to fawn over. I understand that this is how the Idol industry works, but that does not mean I feel at ease with it. In fact, I feel less at ease with it now than I did before, because as Steve put it, this is Management basically claiming the members of HouPri as their property and if anyone dares to touch them in any way, they are no longer worth it. Reading this and realizing that has hit me seriously hard to be honest, and I just don't even know what to think...

Yes, I do think that Risarina shouldn't breach contract, and I find it good in a way that even the fan is being punished for this (HouPri Management never lets a fan who has basically helped to breach an Idols contract come back to the venue ever again) but I find this whole thing utterly stupid and upsetting, and I feel so bad for those girls, because they can't have a normal teenage or young adult life because they are 'owned' by a company who sell them on as products. I know that some of the girls enjoy this and want to be an Idol, but for those who feel the need to break out, being punished for basically being a teenager is not nice.

Sadly I know that we as fans can do nothing about it, because this is basically like Animal Cruelty; we know it goes on but, no matter how much we whinge, whine, cry and petition for change, it won't happen because we are in too deep with it already. Even if we do see a little change over time, like Noda Hitomi coming back and hjoining READY TO KISS or Sashihara Rino rising to the Top after adulterous pictures of her were given to a magazine or newspaper company, there is still no major change in the Idol industry that allows these girls to be girls. They are basically still products to the industry, and whilst I try to turn a blind eye to it sometimes, seeing something like this happen and then talking over it with Steve makes me realise just how upsetting this entire thing is for me as a fan, and how hard it is to think that this is what happens, and that there is no way of stopping it.

I love my Idols and I love Houkago Princess, I love them with all my heart, but I'm having a difficult time with this one, because this Report has shed a lot of light on a topic we all struggle to deal with as fans, and I honestly just don't know what to think right now.