All opinions within this post are my own. The songs I choose for this list are based solely on my opinions, so don't get offended if a song you like ends up in here. As long as you like it, who cares what I think, right? Don't get offended just because I can't meet your ideals towards a song.

It seems like this year, I have started naming my Year End posts ~Okay! Musume Style~. Why I have done that is beyond me, but I seem to like the tag. So yeah, ~Okay! Musume Style~! Let's try and make it happen It's not going to happen, like Fetch never happened /sobs


Anyways... this year, when I was thinking about what songs were the 'Worst' this year, I found that I was having a difficult time. When I think of the word 'worst' and then Idol songs, I think of songs that I hate with a flaming passion, and honestly... there is only one song that I loathed greatly this year, a song that I find the 'Worst' of 2013. I can't jolly well make a list with just one bad song, right?

And then I remembered that, whilst there were some pretty good songs out this year that I enjoyed greatly, there were also a handful of pretty damn boring songs as well, which gave me the idea to create a 'MEH' list - a list of the six songs that I found to be the dullest, most mind-numbing tracks that this year could have produced. Whether this is a step up or a step down from being the 'Worst' is up to you, but still, these songs were pretty disappointing, and all around pretty damn crap! 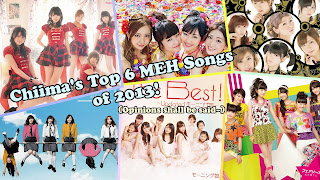 So with that said, let's crack into The Top 6 MEH Songs of 2013! Will a song you loathe with a great passion be in there, too? Or will I awkwardly manage to place in a favourite? We will have to take a look and see! Let's go! 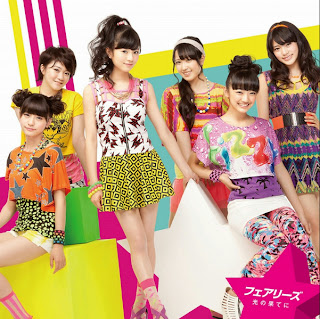 Hikari no Hate ni by Fairies

Just because I like this song, it doesn't mean that I am saving it from the List of 'Meh'. Hikari no Hate ni is one of the few songs by Fairies that I actually enjoy, however, it is mind-numbingly dull, generic and stupidly safe. There really is nothing amazing about this song, other than it is cute and so... Idol-y. It's peppy, up-beat and a fun tune, but good lord, this is a weak song, and it really lacks in Fairies' true personality. Sadly, this is also the groups only single for 2013, meaning that they have no other single to fall back on to save them from looking like their music has taken a downward spiral since 2012. Oops. 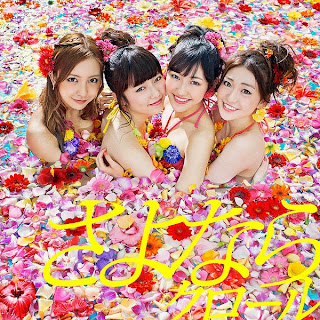 Sayonara Crawl would have been high up on this list, possibly in the Top 3, if it wasn't for the fact that I did death-loop it a bit. I do enjoy it, though I say that through gritted-teeth, because I don't want to admit it. It is truly one those guilty pleasures that eats away at me and makes me regret enjoying it. Urgh.

My confessions out of the way, this was a really shit Summer release from AKB48. After the great quality of Manatsu no Sounds GOOD!, I had very high hopes for AKB48 when it came to their summer song, only to be let down greatly. I was heavily disappointed, I will be honest with you, though this wasn't the biggest disappointment of the year in terms of music (we will get to that one soon enough...) but it was still overly weak and one giant pool of blurgh. It's a boring song, with such a dull tune and a generic tone. It also has one of the ugliest PV's of 2013, too. There is no saving this terrible track...

Well, other than that catchy generic sound, that is. Damn my ears for enjoying it! 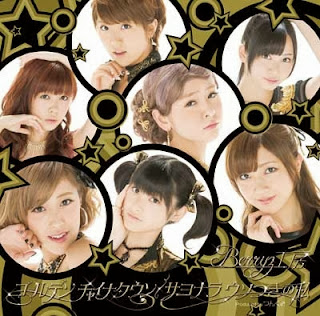 We're now onto the songs that I actually don't give two figs about, because they are just that dull and uncreative. This is, of course, one of those dull songs, and my lord isn't it just so boring and uninspired?

I really was not impressed with Golden Chinatown at all. Sure, it has some catchy elements, but the girls sound (and look) bored throughout the entire song. They sound bland and lifeless with the exception of Momoko, who's weird cuteness manages to channel some personality and life into the song, and the song is just plain forgettable and bland bland bland! Whilst Sayonara Crawl is, in my opinion, worse than this one in terms of how forgettable and lacking in diversity it is, that song at least has something to grab my attention. This one doesn't.

Thank God that its accompanying A-side song Sayonara Usotsuki no Watashi is good! 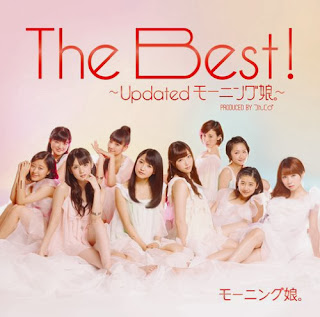 Honestly, this entire album could be in this spot, but because this is a Top 6, I am just throwing in the one song that disappointed me the most... Oh, Wolf Boy, where did you go wrong?

For me, this song was the biggest disappointment of the year. In fact, the entire album was one huge disappointment, but this song did nothing for me at all, and I feel duped in a way.

I have a feeling that the hype for this song did not help one bit, but this song just fell flat. There was no charm about it, it sounds... well, it just sounds unappealing. I get why people enjoy it because it can be fun sometimes, but I really just don't like it. It's... well, it's meh. It has nothing about it that grabs me, and I honestly thought it would be better. But nope. It's just what it is, and I just have no love for it.

... It's kind of weird seeing MoMusu in my Top 6 MEH Songs of the year. 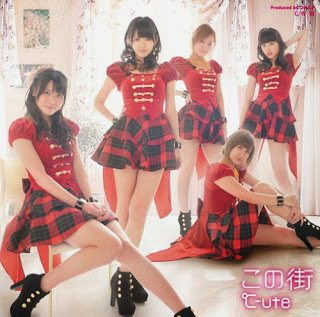 This song is so dull, I actually forgot that it existed. If you're wondering just how it managed to scrape away from being Number 1 on this Meh List of songs, well, let's just say that it's better than the song I have in mind for Number 1. It has some saving grace, luckily enough.

I honestly wish that C-ute had covered the song in its original, upbeat form, because that was a great song, and I honestly hyped myself up for a rendition of the original... but instead, this one came out, and I was sorely disappointed, very bored and, in the end, I just turned it off before it could even get halfway through. It is such a dull song, it almost puts me to sleep.

I don't think it helps that the blandness of Maimi's voice makes this song sound duller, either. In fact, they all sound boring and dull, except Airi. She truly is the saving grace of C-ute.

Good Lord, I sound like a C-ute hater xD

And so that leaves me with just one song left to call the 'MEH'est' of them all, the song that has truly bored me and did just nothing for my year of 2013. It is truly the most uninspired of them all, the one that is just... yeah, it just sucks. Let's take a look at it... urgh! 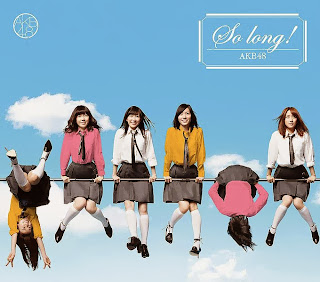 AKB48 did not start the year with a good song. In fact, this year their A-side music has been pretty bad, with this being the worst of the lot in my opinion.

I like Graduation singles, and I like slow songs too, but when songs are this slow and mind-numbingly dull and forgettable... just stop. I mean, it's not like it isn't pretty, because it is, but it's also very boring and overly generic. It is my least favourite Sakura song from AKB so far, and I don't think that the horrible high notes used helps in how I favour the song. I just really don't care for it.

This isn't the worst song out there from 2013 though, it's just the most boring. Of course, I will save this dull, far-too long song and bid it a So Long! and a farewell as I let you all in on the song that I personally find the worst for 2013. Wanna know what it is? 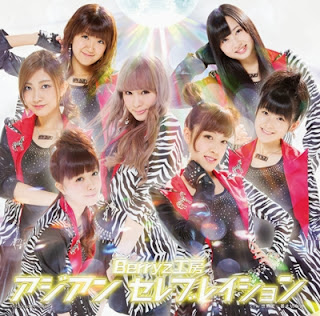 This one truly does go on the wall of shame, or at least in my room it does. Good lord, this was a disastrous song.

The thing is, I know a lot of people love this song, but I just don't. I really did not enjoy it one bit when it came out, and I still find it irritating and all around bad. It does have a catchy and fun beat, don't get me wrong, but it's just so terrible in my opinion. It's basically the One Two Three of 2013 for me!
Yes, I loathe it that much.

Asian Celebration was the only song that sprang to mind when I thought of 'The Worst of 2013 in a song'... it's the only song that I knew fit that title perfectly, which is why it has this ultimate title of being the worst. It isn't 'Meh', because I do think it is far beyond boring as it does sound enjoyable, but my feelings of absolute dislike towards it are just so strong... it really is a horrible song! This song release did not kick-start the year positively for the group, though thankfully Tsunku did prove that he still liked this group enough to give them good or great songs thanks to their other singles... well, all but the Meh fail of Golden Chinatown, that is.

This song beats out the 'Meh's' and really takes the cake of 2013 in terms of how bad it is. It is the Bottom of the Bottom for me, and the one song that I will gladly never listen to again.

And with that, I end my Top 6 MEH Songs of 2013 (and the Worst of them ALL!). These were, undoubtedly, the songs that bored me to death and the songs that I least favoured this year, with the exceptions of Hikari no Hate ni and to a certain degree, Sayonara Crawl, which I hate, but disgustingly enough like as well.

My choices and opinions may not favour yours, but for me, these were the downfalls of the year from the batch of music I have listened to. Surprisingly enough, this years batch of disappointing songs have mostly come from Hello! Project... but whatever, at least I'm not showing bias any more. I'm still shocked by how many H!P songs made it in there, though.

This has been my Top 6 MEH Songs of 2013, and compared to my Top 20, this was rather easy to compile as I already knew which songs would go in there. The way it has been ordered, however, surprised me (especially with Sayonara Crawl. It dodged a bullet).

So, what are your Worst or most Boring Songs of 2013? And if you find a song we have similar opinions on, or even contrasting opinions, be sure to let me know~

I wonder what my next End of Year post shall be? Hm...