The Consequences of Your Opinion

What is written here is, undoubtedly, my opinion, and you may like it, you may not, and some will ignore it because they do not want my opinion. In the end, there will be someone who conflicts with what I say, what you say, what we all say - it is life. However, all of our opinions count, but please don't be so close-minded as to ignore someone else's opinion just because you value your own. Let yourself open your mind to what they have to say, and learn from both your opinion, and theirs.

I want to point out that, originally, I did write a rant post before this one, however I have decided against posting it because it was created from direct anger and hurt. However, it did help me to write this post, which is a reflection of what has happened.

I summarised my entire post in my Disclaimer. Are we done now? 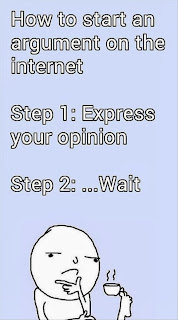 I think that this image is a perfect representation of what I am going to talk about today, class.

So, opinions. We all have them, and we all use them at some point in our day to day lives, whether we are talking to someone we know at work, school or home, or if we are on the internet. No matter what, we openly voice our opinions, and in a sense, we know what to expect; either someone will agree with us, or they will disagree. It is a part of the by and by of life.

But, having an opinion is not a simple thing, especially when you are a part of a fandom that has a lot of strongly opinionated people. Whether it is a Justin Bieber fan (they are shit scary, and don't listen to reason; TRUST ME) or someone who closely follows the Jpop culture that we all love ourselves, there will be someone out there who will bite at your opinion, and not let you win because, like you, they are heavily passionate about what they believe in, and they don't want to listen to reason or take into account that, just maybe, you have said something they understand or something that is probably true. Heck, we have all been there, and some of us are probably still in that position.

The thing is, with fans like this, they can quickly turn an opinion into a hate speech, and will never look at the good in what you say, and only take in the bad of it all and immediately judge you on it. That is how internet fights in fandoms spark, and it is also one of the reasons why many fans of certain pop cultures stray away from them, because it seriously is scary and disheartening. I admit, I stray away from forums a lot now because of the fans, though I am not saying ALL fans are like this, just the ones who are so heavily opinionated that they don't listen to what someone else has to say, because they have already thought of them as a hater and someone to judge because of what they have said.
This is why I stick to Facebook, though sometimes that is no better, but people are a lot more open there I have found.

Now, I bring this topic up because recently, I experienced something like this. After writing my article in 'The Issue With Berryz', it came to light from a friend on facebook that I had been, and I quote, "bashed" on an online forum for what I had said, and that they thought I should know. Now, because I rarely frequent online forums for this very reason, I initially would have had no idea that this was going on, but now that I did, I decided to take a look to see what had been said. Of course, it wasn't the worst I had seen from the person who had started the post, but it wasn't generally nice either in a way. I mean, knowing that someone has felt so upset by something you have written is actually very upsetting for the person who wrote it, and I did go and apologise, but in the end, it was my opinion and I did note that if you didn't like it, then don't read what I write. Of course, what they had said on the forum did spawn a few other posts from people who were like-minded to the original poster about me, and they did of course dish out that I was a hater, and someone who was unworthy of the Berryz fandom.

Now that is bashing.

The original poster was hurt by what I had said, and I understood that. I also understood the consequences I would have to take on by posting something as risky (for the H!P fandom, at least) as a post on Berryz and how I felt they should disband, otherwise I would have never posted it, and I knew that I would potentially get some dislike and hate for it. The thing is, I expected people to comment on my blog with the hate, but instead it was on a public forum, for fans who had the same mind-set to see, instead of commenting and talking to me about it. And yes, I did take a serious issue with it, and even now I find the original poster to be rather immature and scared to do that (but not bad), but in the end they made it public to other Berryz fans who would also take issue with it. Why? Because it's the safe thing to do, rather than come out to the original writer and take issue with them, and listen to their own reasons.

Now, my main issue with this whole bashing thing wasn't the person who originally wrote about how it affected them, but the people who posted afterwards. I highly doubt a lot of those who posted afterwards, calling me out as a hater and what not, had even read my post, let alone looked at it. If they had taken a read of it and decided to hate me afterwards, then fine, but it was that fact that it looked like they were all basing their opinions (oh look, that word!) on me from what someone else had said... and what that person had said was all the things that were, you know, bad. So yeah, it did rub me in the wrong way.

Of course, even after I did try and talk to the person about what had been said, and heck, I even apologised, I still received the same answer from them that they had originally started the topic with... as if they hadn't even read what I said, and disregarded anything I would say after that. So, I just left it at that afterwards (I did respond once more, after Wotutu, my Knight in Frilly Lolita, dashed to my defence on the forum without telling me she would do so... my hero <3) and I haven't looked at the forum since, because I don't want to know what has been said now, as how they feel about me and what they think has already been confirmed; they don't like me, and they think of me as a Berryz Hater who will never be a fan in their eyes of their Holy Group. The end, pretty much. 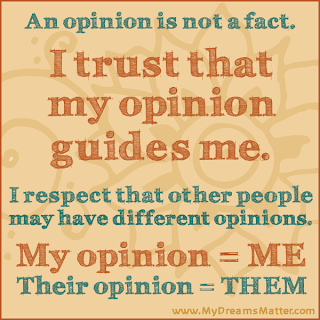 Honestly, it is really good to have an opinion, especially a strong one, but it is not good to have an opinion so strong that you are ignorant to everyone else's opinion and blatantly ignore what they have to say to try and help you see their point of view. Yes, this person had stated I could have my opinion, but even when I talked to them about it they answered with 'You hurt my feelings, I am still hurt, and nothing you can say will change that' (in a sense), and that just showed me how indifferent they were to what I thought and felt. They didn't care that I was willing to talk to them and let them show me what they saw in Berryz, or let me know information I had gotten wrong (they had stated Berryz did indeed sell out Budokan, but someone else said 'we know they did, who cares if she doesn't' as if to pass off my opinion was nothing, and that I would not learn because I was ignorant to what they knew... erm... yeah...). This person did not really care for what I had to say I think, and whilst I think their opinion of Berryz is as good as my own, I do take issue in the fact that they won't listen to what others have to say, and will only let in the like-minded souls who share their passion and love for Berryz, rather than allowing for a more diverse opinion to infiltrate their perfect image of the group.

But, this is what happens, and it is to be expected. When you are vocal, online or in the real world, there will be consequences that shall, at some point in life, be met, and even though you know that this will happen, it will still surprise and hurt you, and you won't like it. People will jump to conclusions, and they will think of what you say as hate speech, and because of what has been written or said, others will immediately judge you for it based on what someone else has said about you. They don't see the good, they only see the bad, and whilst that original poster has been hurt by what you have said, you will also hurt because people are calling you a bitch or a hater, and bashing you with ill-intention, and they do not understand that you are stating opinions, not facts. There will be some people who don't judge you straight away, not everyone is like that, but if one person talks to another person or a group of people who share their ideals because it is safer for them, then you will be branded as someone who is unworthy and evil, no matter what you say to help them see what you mean, or to show them that you are willing to talk to them and learn.

Let your opinions be open, but don't let yourself become so close-minded that you shut out what another person thinks just because you don't want them to break your ideal. Be willing to open yourself up to facts and theories, and let yourself learn more about the person, because then you will not only learn more about a group or culture someone else likes, but you will learn more about what you like, and why you like it, and the flaws that make it awesome.