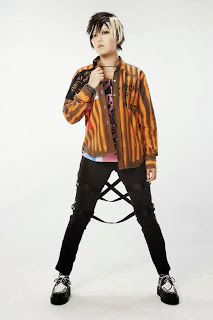 On September 8th in a blog entry, Ruhara Renji of Fudanjuku announced his graduation from the group. The Anime/Manga Otaku who bore the flaming colour of orange has been in the group since 2008, however has decided to graduate the group due to physical health problems that had previously stopped him from finishing the groups summer national tour, FUDANJUKU Ranbu TOUR 2013 -12 locations nation-wide Ichi Dozen Time-, and also stopped him from participating in the music video recording for Fudanjuku's latest release, Danso Revolution.

Ruhara Renji wrote the reason behind his graduation decision, which has been translated by Tokyohive (original and complete entry in Japanese is HERE):

"Hello. This is Ruhara Renji.I have decided to graduate from FUDANJUKU.Everyone, thank you so much for supporting me for a long time.I am so much better now. I am well enough to have no problem in my daily life.However, the doctor has stopped me from strenuous physical activity for my current condition, and the situation makes it very difficult for me to perform at live shows.

I can still have a normal life, but this situation of "not being able to participate in live shows" equals to losing the core essence of my participation in FUDANJUKU. I've made this decision after much thought, and these are my true feelings." - Ruhara Renji

Ruhara Renji had been diagnosed with thyroid disorder before, however the disorder did not affect Renji until recently, and now it has halted what he can do as a performer. Because of this, it was decided by Renji that he would graduate the group with the release of Fudanjuku's new single, Danso Revolution, which was released on September 18th.

Ruhara Renji, who is also known as Harada Mariru, his female Idol counterpart, has been a part of the group since December 2008 and has participated in singles since the groups second official single release, Ore no Sora.

I think my heart broke when I saw the announcement on Tokyohive today. I mean, I had previously told myself that this would probably happen after I found out that Renji-kun had taken leave from the tour suddenly, and when I saw that he wasn't in the PV for Danso Revolution (and cried when I couldn't find him anywhere) I tried to prepare myself a little for the worst to happen, such as Renji graduating the group... and of course, that has happened now, but seeing it in front of me is very painful, and once again, I have cried because Renji is not going to be a part of Fudanjuku any more, a group I like, even love, a lot.

Ruhara Renji, from when I first watched Fudanjuku and started to enjoy them, has been one of my favourite members. He was the first member I really wanted to support as a fan, and the one who appealed to me the most. Of course, I love all the members, and I have a few more favourites now such as Kouki, Kyouhei and Ryouma, but Renji was my favourite, and not seeing him in Danso Revolution broke my heart when I first watched it and tried to find him. He is a joy to watch, and for me, is the coolest member who really stole my heart when I first started to follow Fudanjuku.

I am deeply saddened by his graduation, but I did know that deep down, it would probably come to this after I read that he had been ill and could not participate in the groups tour. It must be heart breaking for Renji as a performer, and Mariru as an idol, to leave a group that they have been a part for just under five years, a group that they have helped to build to what Fudanjuku is now, and a group that they love and have watched grow. It must have been difficult to make this decision, but like many Idols before Renji who have left their agencies and groups behind due to illness, Renji has made the right decision in order to save their health. It is, for many fans, a sad decision, but it is the right one.

I love Ruhara Renji, and the news has saddened me so much, but I am thankful to know that Renji has made a decision to save their health. Yes, it's painful to watch them go as a fan, but it is for the best, and all I can do right now (other than cry) is to wish Renji the best, and hope that they watch Fudanjuku with love, support and kindness as the group grows, and to also watch over them and future members who may come into the group as a fan, supporter and former member.

Renji-kun, good luck. I wish you the best, even if it is sad and painful to see you go. I love you so much. You are my Fudanjuku Favourite, my Oshi of the group. Daisuki~

The song I have been listening to as I wrote this is Shita wo Muite Kaerou. I don't know why, but it just seemed to be fitting for me right now... also, Renji is beautiful in this. So bad-ass and hot, and on fire! I loved him in this, and his solo line was the one that made me think 'Amazing... this is the Renji I love'. I will miss him so much, but I wish Renji the best as he returns to being Mariru, and pursues a normal life. Good luck, and goodbye. We fans love you, and we hope for the best. Please, get well soon, and be happy.