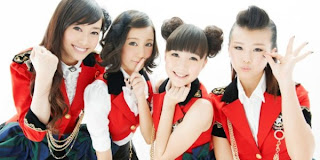 On July 1st, 2013, Sea*A's official Facebook announced that the Singaporean Anime Idol group would officially disband. Since their debut in August 2011, the group has gone on to release four original singles, a mini-album and their first album. The girls have sung for anime, and have also performed live at Anime lives.

Here are the messages left from the Sea*A staff team and Valerie regarding the choice of disbanding the group.

As of today, 01 July 2013, the disbandment of Sea*A has been decided.We deeply apologise for the sudden notification.

From their debut in August 2011, Sea*A was founded as the first Anisong Idol group from Singapore, consisting of members that love Japanese culture and strongly wish to be a part that culture.

With many thanks to their fans, Sea*A was able to be active in a country foreign to them even though they were unable to speak Japanese when they first arrived in Japan.

Once again, thank you very much for your support for Sea*A.While Sea*A has been disbanded as of today, Valerie will continue to be active in a solo capacity. We sincerely hope for your unwavering support.

This is perhaps the last time I will be calling you guys this. We have decided together to end our official activities as Sea*A. On behalf of the other girls, I sincerely apologize for our sudden decision. It has been a life changing two years with everyone and we will remember all of TEAM Sea*A dearly in our hearts. We will never forget all the memories we had together. We also want to thank the people that have supported us through and through, not only our fans but also the staff that worked hard and supported us in these 2 years for our activities as Sea*A.

This decision was made together because each of us has decided to take a different path in each of our lives. And I only wish for your understanding and support for our individual decisions. As of 1st July, I will be continuing this journey as a solo artist and I hope that you will join me in my new journey. The four of us are still great friends and they support me in making this decision.

I am sad but also grateful that I have met these girls and have crossed paths with them in my life. It has been a truly amazing experience to grow together with them in this short 2 years. It was a heartbreaking decision for all of us to make. But they say if you are brave enough to say goodbye, life will reward you with a new hello. We only part to meet again.

Thank you for all the love and opportunities that all of you have given to us as Sea*A in these two years.

Please continue to support us individually.

To be honest, I don't know what to do. I don't know what to write... because I think that this is one of the worst things I could come across this year yet. I liked Sea*A, maybe not as much as Morning Musume, but I really liked them and enjoyed whatever they brought out. Heck, their songs and PV's have been a beacon of glory most of the time, and the girls are such a joy to watch as Idols... actually, it is hard to believe that they aren't Japanese sometimes, they are just so wonderful and professional about everything...

It was so sad and heartbreaking to see this news on my Facebook news feed and to realise that this is true, that they have disbanded... I'm still processing the idea that Sea*A, an amazing group made up of Singaporean and Malaysian girls, is not here any more. Seriously... they were so perfect together, and so dang talented... Why, why, why?

Of course I can't do anything, I am a fan and all I can do right now is sit back and wish them luck with what they want to do, but as a selfish fan, I just want them to stay together... Okay, their run has been a good one. Two years together, despite being a non-Japanese Idol group, is damn good! They have released four singles, a mini-album and a full album, and they have made a name for themselves. They have sang popular anime songs, made fans and sang for anime, and they have some damn good songs, too. They are an awesome group, and to be around for just two years and to have accomplished this much... yeah, it's amazing... but two years feels like it is too short.

I will miss them so much... they are an amazing group and I am so glad that I have been around as a J-Pop fan to see their run. They have brought me absolute joy with their songs and their bubbly personalities in their PV's. They are so talented and so wonderful, it is a shame that they are disbanding... but I can't stop it, no one can, because it has already been decided, and it has already happened. Sea*A is no more, and it saddens me so much.

Sea*A was such a good group, and I already miss them. I didn't realise how much I treasured them or their talent until now, when it is too late... goes to show that sometimes you may overlook something so great, for something that is nice, but not as good.

Goodbye, Sea*A. I loved you whilst you lasted. Maybe not as much as others, but I did treasure you. It hurts to know that you won't be around any more... now, let me cry in peace as I listen to the most beautiful song that you produced, Friendship Birthday ~Arashi no Yoru ni~.