Aiuchi Kohana of Houkago Princess has Announced her Graduation 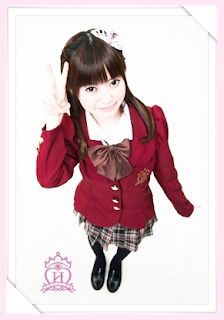 On July 18th, Houkago Princess Cadet Aiuchi Kohana updated the shared Cadet blog with the sudden announcement that she would be graduating from the group, and will share her last live with graduating General member, Chiba Sakino, on July 21st at Shibuya RUIDO K2.

Below is the translated article from Aiuchi's blog post regarding the reason why she will graduate from the group. A major thanks to Momo of Momo-Musu, who translated the article for me!

I, Aiuchi Kohana, will be withdrawing from Houkago Princess cadets.

The reason I have for withdrawing is, I have decided that my family circumstances have reached a serious state and left me with no other choice.

I really love Houkago Princess, and really, I’ve reached my limit with my worry.

But, I’ve decided my family needs to be the centre of my focus instead.

The first time I saw Houkago Princess on YouTube, the cuteness of the members in Juliet ~Kimi wo Suki na 100 no Riyuu~, and then the atmosphere when I passed the audition to join.

I’ve worked with absolutely all of my might these past 7 months, for the chance to be promoted to a full member.

I’ve cried a lot by myself, and even though I really don’t want to do this, because everyone’s supported me and because it’s been fun, I’ll do my best. I’m very greatful.

Thank you so much for a wonderful 7 months.

The One Man live on the 21st will be my finale.

I’ll try with all of my strength and all of my power to deliver a fun time during the final live too!!

I read this article early in the morning, and whilst Google Translate is never the best for these sorts of things, I did understand, to a degree, that the reason why Aiuchi has chosen to graduate is to do with her family more than anything, despite how much she loves HouPri, and despite the fact that she has been working hard for 7 months to try and become a Regular member like her senpai.

It is sad to find out, so soon after Sakipyon's graduation announcement, that another Houpri member will be leaving the group. It is even sadder that, for Aiuchi, it is to do with problems at home. I may not know much about Aiuchi, but I feel very sad that she will be leaving Houkago Princess, however it makes me a little bit happier that she will be leaving alongside Sakino, who will surely watch over her warmly as they give their last performance with Houpri on the 21st.

It is sudden, and it is sad, but I hope that Aiuchi will be able to graduate from Houpri knowing that she has done the right thing for both herself and her family, and to look forward to the future, and know that her time as a Houkago Princess, whilst rather short, was a fun, happy and wonderful time.

Aiuchi Kohana of Houkago Princess, good luck, and may your family be well, and your future bright.