And then they appeared once again! By George, they've returned! Welcome back, my Princesses! Glad to effing see you again. 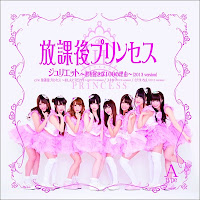 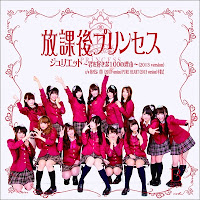 (Wow those are some ugly effing covers... or at least the pink one)

The group I am talking about is, of course, Houkago Princess, the "Oh, I'll be home at twelve after I buy cigarettes, oops it took me a year to return home" group of the indies Idol world, or that guy who never calls you when he says he will, because he's obscure like that... or something... (wow, what?). Anyway, yeah, they were the group that went public for a year, and then suddenly went obscure for another year and performed selectively. Well now they are back, and they have returned with a spiffy new CD (basically a compilation of their previous singles and B-sides that went public, but in four editions) and two new PV's! So I am, of course, excited!

... Though I do wonder why they decided to redo the PV for the song Juliet ~Kimi wo Suki na 100 no Riyuu~, and not Houkago Princess ~Oshiete Kudasai~, but whatever, I'm just glad to see that these girls have returned and seem to be coming back with a vengeance, and a budget! It's nice to see them return, though their choice of costume is, erm, questionable... but hey, who am I to judge an Idol group by their clothes?

Anyways, yeah, I will be looking at one of two PV's from HouPri, and this first one is obviously their second-coming of Romeo and Juliet, or something... and it's quite a bit different from their original PV, such as the costumes, location, footage... yeah, you get the idea of it.

So, with that all said and done, please do prepare yourselves, because hoo boy... there is a lotta pink in this, and you just might need your sunglasses for it.

I love how they simply stick (2013 version) on there to make it look like they actually changed up the song a bit...

They didn't... or at least they didn't change the sound, which is what I expected!

Quite a few of these Noobs look like bewildered ducks...

How many of them actually look like they want to be there? None. Even Nana is staring off at the floor like '...yup. Not gonna enjoy this'.

If I didn't think that my Hitomin was a Tsundere, which I highly suspect she is, I would be surprised that she looks so bored... but I am used to this look on her pretty face.

Holy crap, it's like a flurry of Pink Marshmallows...

Ooh yay, filtered offshots from that other MV they did...

My Hitomin is so cute, her ears and smile are a part of her charm <3 But I miss her omelette obsession D;

I have no effing idea who most of these girls are now, I swear, HouPri has turned into HouPri48 all of a sudden!

Chiba is extremely cute, I am so happy she is still in HouPri... I need to recognise someone!

Holy crap, they perform at actual venues other than their Ikebukuro theatre!?

Clearly, both Nana and Hitomin want YOU to join the HouPri Army!!! Oh, and Saori does too not that she really gives a crap from the look on her face...

Hitomin: "Don't worry, Chiba... being short isn't a BAD thing... you could always try to be an Oompa Loompa?"

It actually amazes me that HouPri seem to have a budget for this PV, despite using so much stock footage of lives and such...

This amount of pink somewhat sickens me, haha.

Chiba does, however, look quite cute.

Yikes!!! I mean Hitomin, you look so cute back there...

And is it just me, or does the girl who I think is Miran look less than flattering in that outfit? The frills don't suit her, and neither does the abundance of pink.

I swear, every HouPri member who's name I don't know is now immediately Miran.

... But still as awkward as she was for HouPri's debut!!! Not even Ikuta Erina is this awkward.

Oh yeah, I forget that some of the members are still 'Cadets'...

Wow, this girl gets a little bit pinker every time I see her...

You know what? It's as if their manager gave them all some money, and said to them 'Here, go crazy on all the tack and pink you can find!!!' and then let them loose in a Giant Claire's Accessories.

Hooooly crap, that was ages ago, back when the original members were still there minus one... how do I know this?

I watched that effing performance somewhere on youtube... back when these girls only performed in Ikebukuro and before they vanished off the face of the Media planet.

Urg, you know what? I really want to dislike Nene, but at the same time, I want to hug her... maybe it's cos she looks like both Mayuyu and Riho.

I have to say, less pink is better. It's nice with just two of them, even if they do look like Flamingo's or Marshmallows.

Heart-wrenching scene where I think Rika is being accepted as a full member, and is no longer a cadet...

A lotta love from Rena, I believe...

And some tears to be shared between 3rd Gen Cadets/members Saori (I think) and Rika... d'awww!

This is clearly Chiba after a few cups of Sake.

Chiba: "Kyaaa, I am still centre, even with all these younger girls around!"

I'm surprised she still managed to say she was graduating, and then just stay... it baffles me sometimes.

Chiba is definitely one of the cutest out of everyone, but her voice suuuuucks.

Holy crap, I have a feeling Saori will become a close favourite here! Her faces are just AWESOME!!! Look at her in the left side of the image just behind Nana, hahahahah proceless!

Wouldn't it have been funny if they all fell into the fountain?

I actually really love the hall they filmed in. Budget well damn spent!

Okay, so where to start with this? I guess the best place to start would actually be how disappointed I am, or was, that the song did not change at all, other than some solo changes. When I saw that this was the '2013 version' of Juliet ~Kimi wo Suki na 100 no Riyuu~, I kinda expected the instrumental to change, too, but instead it was just the lineup and the costumes, and the video... and the budget... but yeah, it was mostly video orientated, and I do think that I was a bit put out by that. I expected the song to have changed, but nope...

Sadly this is actually the case for the entire track list of the CD, too. None of the instrumentals have changed at all, just the voices behind it. Pretty saddening, if you ask me. -sigh-

Anyway, that said and done, let's look at the PV. This is basically HouPri's comeback into the PV business, a return from their time away, and with this PV, we actually see a lot of footage that hints at what they have been doing; concert performances, appearences, concert practice, dance rehearsals, cadets being announced as full members, their own lives in their Ikebukuro studio... you've got it all in this video pretty much, with extra behind the scenes footage of their MV for Sosugyoushiki, too, and to me that's pretty damn decent, at least for a comeback PV... and I think that it was a smart move on the editor and directors part.

We haven't seen HouPri for a while, so to see all this footage compiled into one music video, with the added dance shots and some close-ups or long shots of the members they want to show off the most (Nene especially), is actually really nice. I have missed HouPri, and just seeing that they have been performing on an actual stage, to a full crowd... well, it's really nice, and it makes me feel happy as a fan. It's nice to see what the girls have been up to in the time that they have been gone, and when you see that they have been working hard to go onto bigger venues... it actually makes that wait worthwhile, because now I know that they have been gone for a reason, to make a comeback into the Idol world to become bigger (literally) and better, to try and look more polished, and just to try for better things... hell, they're going to Tokyo Idol Festival this year! That's amazing! Their hard work has freakin' payed off, in my opinion!!!

Okay, that aside, I do really like this video; the footage used adds personality and really shows off those cute and kinda goofy sides to the girls. It also does a good job of making you want to root for the girls, too. The PV isn't the most polished, because it's footage compiled from various activities, events and other things, but it works for the video, and gives us a good look at what HouPri has been doing, and what they have been working towards... and in a way, I feel like this PV is better than any polished PV you could get, because there is a sense of 'realness' behind it, and not just girls acting in front of the camera. They have silly antics, or they cry at being accepted to be a main member, or they are rehearsing... it seems a lot more realistic, and a lot more emotional in some parts, which is why I think that this PV is really good; yeah, HouPri are still one awkward group, but I think that all the extra footage used in this makes up for it, and shows us that hard-working, dedicated side to the group, and I like that.

Now the bit I don't like... and that has to be those hideous costumes. Seriously, who would... it's like someone went into a little girls wardrobe and pulled out all the pink, frilled tutu's and plastic crap they could to make this hideous outfit for this PV... actually, wait, no - these girls are dressed like they are ready to debut on Toddlers & Tiara's. They are just so tacky! I loved the original outfits for Juliet ~Kimi wo Suki na 100 no Riyuu~, those costumes at least had taste, but these ones... argh! I don't know if some are Lolita, Fair, or just plain atrocious! And some of those costumes don't even suit the girls, which is sad... but yeah... those are some hideous costumes, and that is really my only complaint, but eh. Whatever... what can ya do?

Anyways, that said and done, I do like this PV. Probably more than the original one, possibly... but that's to do with the fact that I think that this video is a lot more sentimental than the first one, and you can really feel the hard-work and meaning behind it. It's a sweet video, and a nice way for HouPri to return to mainstream media. It's as if they are saying 'We are back, and this is what we have been doing... we didn't leave for nought, you know~', and yeah... it's a nice PV to come back to, in my opinion.

HouPri, I hated it when you guys left, but I seriously am glad that you are back... I missed you guys.