Pleas take into consideration that these are my thoughts, and I am going to get emotional. It's a rant; expect me to be a bit of a bitch here.

If you want a more logical, well-thought out read, and not a rant, please check this link:

Also, the Blog translation of Airi's apology post, thanks to Takamaruyo forums:

Erm... What the Fresh Hell did I come home to? Seriously, what the damn Hell? 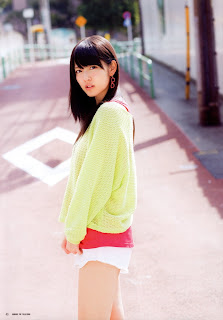 Okay, let me clear a bit up first; a few days ago, a picture was posted on Facebook somewhere showing Suzuki Airi, the back of her head to be exact, sitting beside a guy on a bus. Yeah, that was pretty much it, and for a few days nothing else was said.

... Well, that was until Airi posted on her blog apologising for what had happened, and telling her fans that they were nothing ore than acquaintances. So now it's a scandal.

Okay, are we being completely bloody serious here? She sits next to a guy, on her way home from classes, and someone tweets, instagrams or whatever the hell they do with images nowadays, and it is a scandal? Because she conversed with someone, made a friend in class, and sat beside them? Really, now? REALLY? This is so fucking stupid, I can't even...

Oh wait, I'm sorry, I'm being too irrational right now, aren't I? Sorry for over-fucking-reacting to the situation we are in. I forgot that Idols aren't allowed to breathe the same air as the opposite gender unless they are a Wota and have that 'privilege'. Oh well, too bad, she's sullied goods now. Pack your bags, Airi, you're going home. We don't want you in C-ute, now. Whore. Harlet.

... Okay, that one was a bit over the top, but you know what I mean. Yes, okay there is a little more to it (apparently), such as how she has messaged him on her blog and such, and that she meets up with him... but seriously, who cares? Okay, no dating, I get it, but if she is friends with him, then really... who cares, and what can we do? I know that Airi, as an Idol, has rules to follow, and has an image and reputation to uphold, but sometimes I do feel like the Wota take this sort of shit out of hand and make a mountain out of a mole hill, all because their 'pwecious Idol' breathed the same air as another human being who she shares a class with in University.

Seriously... When the hell did this: 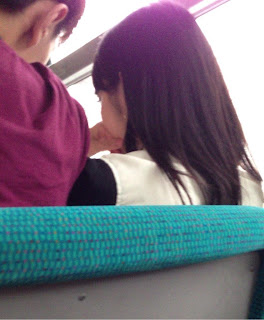 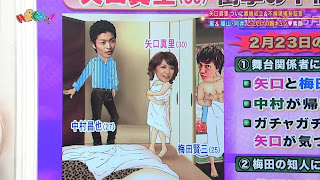 This, to me, is really stupid. I find it incredibly baffling and idiotic beyond belief that Airi sitting next to a guy, conversing with him and such, can cause such an uproar, to the point where Airi has to apologise for sitting beside someone. It is incredibly ridiculous, and it really riles me up. If it didn't, I would not be writing this post.

I know that my energy on getting riled up about this is pointless here, but I really did need to get it across, in my own way. Airi, as an Idol, especially one of her status in H!P, will always be subject to these sorts of things; people will deliberately try to get her into trouble because they can and they might find it funny, or because someone is jealous or something, but I do honestly find it stupid that this is being labelled as a scandal for the pure fact that she sat next to the guy. What next? Will her fans burn her photos when she talks to her father or brother, because they are, gasp, male? Either way, this is ridiculous, and it just makes me wonder about how stupid the no-dating rule is as a whole now, and how ridiculous some fans (not all, some) can be.

... But, if she really did get into a scandal, then what? This is not AKB48 we are talking about, but H!P and UFP; they have a very different way of playing that field whenever a member of theirs is caught up in a scandal; they will either ignore it, like they tried to with Miki (she just left) and Miyabi, or they would totally boot Airi out and shun her from the public eye (like Mari right now).

Again, I find all of this commotion over Airi sitting next to a guy who she apparently converses with quite a bit pretty fucking stupid and unbelievable, and yes, I know... I am adding my own timber and fuel to the damn fire by making this post, but seriously, I wanted to rant and express how idiotic I think all of this. Seriously... she isn't pregnant through touching his arm or breathing in his deathly 'human male' spores, she just sat next to the guy!

But nope, she's a whore, clearly. She's a whore because she is social in her University class, and made a friend. And if he is more than that? Well, what do I care? What we don't know doesn't hurt us!

Ya never know though, if this guy takes pictures of her topless and sends them to Friday, she may become super popular and the next MoBeKiSuJ song, if it ever happens, will be a parade dedicated to her with Airi as the front and centre.