A Dummy's Guide To The Senbatsu: What It Is And Why It Is There

If I say anything wrong, then just remember this: I am still learning about AKB48 in general. Gimme time!!!! Also, I researched as much as I could. I tried... I TRIED!!!!

I recently wrote, and did a video, about the recent AKB48 32nd single Senbatsu Elections that took place on June 8th, 2013. The event itself was the first that I had seen and taken a part of for AKB48, and the experience itself was extremely enjoyable, but after posting my video on my youtube channel about my thoughts and experience with the election process itself, I received a comment that really got me thinking...

I was surprised by the comment, and honestly, I myself am a Dummy and a Nooblet when it comes to the Senbatsu system; this is, after all, my first election and also the first time I have really looked at AKB48 as anything more than a group to review or bash, but the challenge within the question itself made me think, and it made me want to write a blog post as well as ask Serenyty of Happy Disco if she herself knew of any articles that could explain the Senbatsu well. The post that she sent me, Details on AKB48s 2013 Senbatsu General Elections Released, explains the system quite well I believe, however I felt that it lacked when it came to explaining what the term 'Senbatsu' is as a whole, because when I read the question given, I felt that it was aimed more so towards what the Senbatsu itself is, and not just the voting system as a whole... and so, here I am to try and talk about what the 'Senbatsu' is, but also to learn with you all, because I am a Dummy too.

So, all of that said and done, let's venture into my latest AKB48 based post. Let's begin... Douzo!

A Dummy's Guide To The Senbatsu:
What It Is And Why It Is There 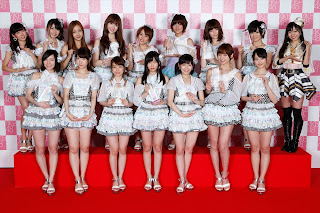 The Term 'Senbatsu' and Where it Originated

When you, as a fan or a casual listener, first venture into the realm of AKB48, SKE48, NMB48 or HKT48, you will find yourself stumbling upon a word that may seem rather alien to you, and that word is: Senbatsu. The word itself simply means 'Selection', and is often used to refer to the selected members in singles, events, performances and more. Due to the large number of AKB48 members, within the group itself as well as the sister groups now, it has become common practice for a certain amount of girls to be picked for singles and media appearances.
The 'Senbatsu' system itself has been in practice since the single Skirt, Hirari, however at this time the members were simply picked by management for their hard work and determination within the group, and ultimately earned the right to be placed in the front. 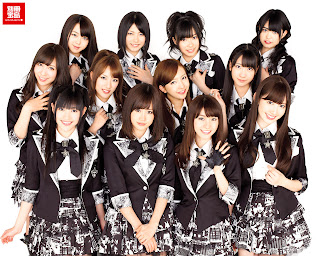 Whilst the general 'Senbatsu' system is not limited to certain members, there will, almost always, be certain girls in the front of a single. These girls most commonly appear in the Media, on the covers of the singles, and will also appear in the title song. This is due to their high popularity, or because Management wish to push a certain girl in order to try and sell her. These girls can be chosen at random, or they could be chosen through their hard work and dedication, or even by how popular they are in stage performances; As an outsider to AKB48's stage performances myself, I can only guess that these stages are used not only as a way to show off the talent of the girls in singing or dancing, but also to see which girls are popular, or up-and-coming in popularity, but I do believe that these performances do play quite a big role in finding out which girls are fan favourites, as well as the selling of merchandise and other things.

From what I, as a casual listener of AKB48 music, know about the general 'Senbatsu' as a whole though, is that there are very few changes in who is shown; these are the girls that sell well, and the faces of the group that management wish to push and sell, and very rarely do these girls unless a graduation occurs, or a scandal arises, or the girls themselves fall out of favour with the fans and/or management. 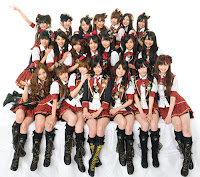 Introduced in 2009, the first General Election was held. The idea behind the election was to allow the fans to ultimately determine which girls would become the 'Senbatsu' members for the single by allowing the fans to vote for their favourite members. The first single to feature this new 'Senbatsu' system was Iiwake Maybe, and featured Maeda Atsuko as the centre of the single.
Originally, the elections were held for both AKB48 and SKE48, and would only feature a total of 30 members; 21 would be chosen for the main Senbatsu, and would be featured on the A-side single, whilst the remaining 9 would sing the accompanying song. Additionally, only the 12 most voted girls would be a part of the 'Media Senbatsu' and would be featured on the single cover, as well as promote the single for the Media.

For the first two elections, the singles included only the Senbatsu and Undergirls members, however as AKB48's popularity, fanbase and member number has grown since then, the new elections have included the ranks of the 'Next Girls' and the 'Future Girls', totalling the number of members for one single to 64, rather than 30 or 40 like the past two singles. This has also given the members of AKB48 and its sister groups a greater chance at becoming a part of either four of the groups present for the 'Senbatsu' single. Additionally, the 'Senbatsu' rank has decreased from 21 to 16, making the positions more and more valuable to members who hope to rank higher each year.
By being ranked higher through voting, and also finding out who the fans support the most, these girls will become promoted and featured more than they previously had throughout the year until the next General Election takes place, however it should be taken note of that, before the voting process begins, management will possibly select the girls that they want or hope fans to vote for in singles by placing these girls in the 'General Senbatsu' for the single and music video that holds the voting ballot for the Senbatsu Election. Because of this, AKB48's summer singles have a larger senbatsu than previous singles do, as it features girls from all of AKS groups.

So far, there have only been five General Elections. The fifth General Election, held on June 8th 2013, was the first to feature a new centre from the previous four singles, where the centre positions were previously held by Maeda Atsuko or Oshima Yuko, and also the first where a member that was not from AKB48 (but, was previously a part of the group) was crowned centre. For AKB48 and its fanbase, the General Election is one of the most important elections of the year, as it can determine where a member stands in popularity, and her placement in AKB48 as a whole.

The General Elections have been held in the Summer since 2009 onwards. 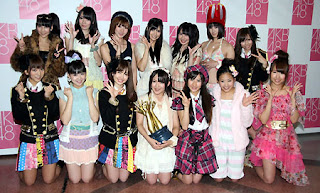 The final, and most recently introduced, form of the 'Senbatsu' system is the Janken Senbatsu Taikai. Introduced in 2010, this new system was a fresh and daring approach to how the 'Senbatsu' system as a whole worked; instead of the management or fans choosing who would be placed in the single, it would all be left to pure chance through a game of chance, namely, Rock-Paper-Scissors. This change in how the system worked would show a never-before-seen line-up, possibly eliminating all front girls that fans previously knew of, and also bringing the possibilities of introducing new faces to the front of the group and allowing these girls to earn promotion through a simple game of chance.

For the 'Janken Senbatsu' single, there are 16 spots that members can claim, and through various rounds, the girls will be eliminated depending on their choice of rock, paper or scissors. Through this process, any girl can win or lose depending on their choice, making this way of creating a 'Senbatsu' on that is, in a way, left to the choice of the member who is up against her opponent. By winning the Janken tournament, a member is able to gain exposure through the media such as magazine interviews, appearances and also as the centre of the single itself. However, whilst these singles are indeed left by chance, members who are regularly featured in singles already can also place because of how random the odds can be.

The Janken Tournament has been held every winter from 2010 onwards.

Why Is It There?

As I am still learning about AKB48 myself, I can only come to this conclusion; the Senbatsu is there to ultimately determine who is popular, and who Management wish to promote. Whilst there are fairer, or at least fair in our eyes, cases such as the Janken tournaments which are now held yearly, we as fans can only assume that the Senbatsu itself is a popularity contest, and a way for the members to get noticed. The 'Elections' are there for the girls to try and appeal to the fans in order to get votes, whilst the Janken tournaments are a way for the girls to get a chance to shine as Senbatsu members for one single. In general, however, it really is up to management when it comes to who they want to promote, though right now it does seem that the elections themselves help in just 'who' management decide to promote.

Thank you to 554466551 for asking about this and also requesting it. It's helped me to learn more about the Senbatsu, and in turn I hope that it helps all of you to have a better understanding of it if you are, like me, new to AKB48 as a whole as well. Thank you for reading everyone~