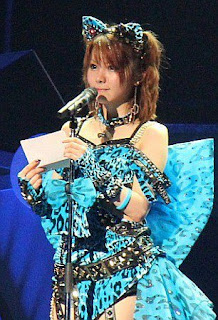 Today, on May 21st 2013, Tanaka Reina of Morning Musume officially graduated. For 10 years now, Tanaka Reina has been a part of a group that has lasted for over 15 years, and has also been the fact of that group for some time now, leading songs and becoming well-known amongst fans.

Whilst I am not a fan of her, I want to wish Reina the best in her future as a singer She is letting go of that Idol image that we have been painfully watching over time, and will be taking on her new Rock persona as a part of the group LoVendoЯ.

Right now, I really don't know what to say to Winky; all has pretty much been said in this one week where I took on the challenge to review PV's and songs that Winky starred in. In this past Week, I have found that I started to like Winky, only to come to dislike her so much as I do now, as a present fan. But, the week that has gone has taught me a lot about Reina, that she is a good singer and that once, she was a natural cutie who had a lot going for her, and that she was at the top of her game on a rising star in MoMusu...

And also that she descended into Darkness, and never came out, cackling and winking away as she threw glitter everywhere.

Even though I currently have no feelings towards Reina or her graduation, I do want to say that I am completely taken aback by her choice of attire for her graduation; I was expecting a dress, but instead we get more Shoe than dress here! But, as my friend said, this choice of outfit combines everything Reina that we know of her; Cat Ears (BURN THEM!!!), Leopard Print, one Giant Ass BOW, her glittery hair and also... her winky eyes.

Oh, should I also mention how half-assed the costume looks? Seems like the designers know that Winky herself is Half-assed, so they didn't even bother to finish the dress. Nice.

My friend also mentioned that Reina looked bad-ass, but in general, this woman never looks bad-ass, so yeah... 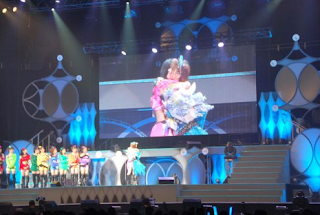 Right now, as a fan of Morning Musume, I have no feeling towards this graduation. I have not cried, but I have not cheered, either. I just know that right now, it's the end of an era, and the end of the Reign of Winky in Morning Musume. I am looking forward to what happens from now on. I will probably wonder where her voice is sometimes, and why her Winking eye is not roaming around somewhere in a PV, but honestly? I am excited to see what will happen next, and also...

I am just so happy to see the back of her. BON VOYAGE, WINKY!!! 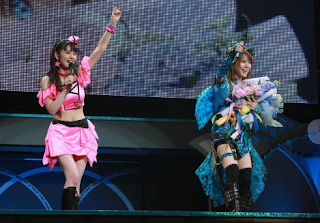 She has given her Final Wink and a Final Wonk, but now it is time for a new chapter, a new Reign in Morning Musume, a passing of the Bows and the burning ceremony of the Cat Ears. Tanaka Reina, it is time to go, so finally I will say this to you, as a fan of Morning Musume and someone who just does not give two figs about you:

Tanaka Reina, Omedetou Sotsugyou! Good luck in your future endeavours, I can only wish you the best!

... Too bad I won't be following you hear on afterwards, unless you catch my interest... which I sincerely hope you don't.