The following post contains my thoughts and feelings towards the Graduation Announcement of AKB48's Akimoto Sayaka. You do not have to like my opinion, but please, just tolerate it. 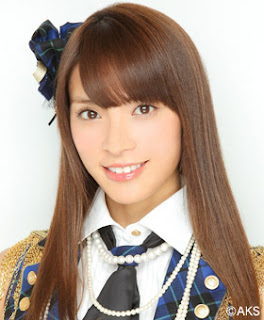 After a playing spree on the Sims 3 Supernatural, and before deciding to go to sleep at around 6am in the morning, I found a flurry of news popping up on various websites that I use for my Digest posts. One article was about some girl in AKB getting a solo career. Another post was about Akimoto Sayaka's graduation announcement.

When I saw this news, I was taken aback and completely shocked by it, regardless of how little I tend to follow the members of AKB48. Sayaka is, for me, someone I hardly know about, however she is also someone I know more about than others because of what people have told me. People like Sayaka, and a lot of people wanted her back in the senbatsu after her 2010 scandal. I also know that, in 2012, she lost her position as Team K captain to Oshima Yuko through the Team shuffle.

But after the change in rules for this years up-coming election, I think that the general election this year gave Sayaka fans a lot of hope that she would have a chance at getting back into the senbatsu if she were to participate, but from her blog post announcing her graduation, that won't happen... and even if I know only a little bit about her, it makes me extremely sad still.

The Senbatsu General Election. Today is the deadline to run as a candidate for the general election.Until the very last minute, I was thinking in my own way if I would participate, and while I was thinking about it, it also led me to start thinking of when the timing for my graduation would be.These past 8 years, I’ve learned and felt a lot of things, and enjoyed the joys of my youth. Because of Akimoto Sensei, staff members, fans, fellow members, family, and other innumerable supports, Akimoto Sayaka is here now. I’m truly grateful.However, my thoughts that I wanted to step up to a new world while keeping things I learned and experienced from AKB48 in mind, and that I wanted to gain more experiences in order to pursue my future dream to be an actress, got stronger.Thus, after thinking thoroughly, I’ve decided to make an announcement at this point of the general election.I, Akimoto Sayaka, will graduate from AKB48 without participating in the upcoming Senbatsu general elections. - Akimoto Sayaka blog post, provided by Tokyohive

I still feel extremely saddened by this announcement, probably because I know quite a few people care about Sayaka and wanted her to return to the Senbatsu one day, and also because it seemed like she was punished in an unfair manner like many other girls in AKB who have been in scandals (Minegishi Minami and Sashihara Rino) but that is what I, not what others, think.

From comments on various posts, I have also realised that a few of the fans don't really seem surprised by this announcement, and there are a few who don't even know who she is (so I guess they are newer fans?), so all in all, everyone has mixed feelings about it. On facebook there is a lot of sadness (and confusing; my friend thought that I meant Yamamoto Sayaka) from this news from the comments I have been getting, which is understandable... a lot of people did like her, and for many this will be a shock. Heck, even I'm sad and shocked by it, and I am a casual listener of AKB48 and their multiple sister groups.

However, when I saw this announcement I also thought that this was a good opportunity for Sayaka herself; I view most of AKB48's scandals and how the management deal with those scandals as unjust punishments, so to see that Ayaka will be leaving AKB48 is a bit of a relief for a third party person such as myself, because she won't be judged by management or punished any longer for something that happened a while ago, and whilst it is extremely sad to know that she has announced her graduation so suddenly when some fans were hoping she would go into the general election this year, I am happy that she is leaving to try and pursue a career in acting. I know that she is still quite popular, and from what others tell me a good singer and has acting experience, so I am sure that no matter what she goes on to do, I am sure all of her fans will follow her regardless.

And now that Sayaka is going, as well as Kasai Tomomi, it seems that many fans or third party listeners are betting on who will go next. Right now AKB48 is really going through a change, what with all the original and older members graduating, and it does make me wonder how management will handle selling the new girls when, for 7 years, AKB fans have been loyal to certain faces and have known the front girls longer than they have the newbs. It's different... and I honestly do wonder who will go next...

And no, it won't be Mariko. She will forever be in AKB48.