All thoughts and opinions are strictly my own and no on else's. Thank you very much~

So pretty much after I had posted my random rant on a preview for a certain PV, guess what Tsunku decides to release? 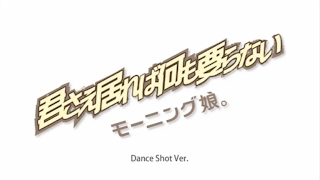 Okay, so I did expect the PV or at least something related to the preview to come out, but I expected it to come out today... or at least later than the time it came out, because when it did come out, I was ready to sleep.

I got no sleep. So of course, I watched the video (about 20 minutes after it was uploaded, because I was uploading a video and then my internet died, and then I was posting a rant... haha) and did a reaction to it... but I was also tired as well, so I knew that I could not review it or screen cap until I was in a better mindset and knew what the hell I was thinking at that moment in time.

I am awake now, though I doubt I have a better mindset because this is me; my mind is a mystery even to myself. 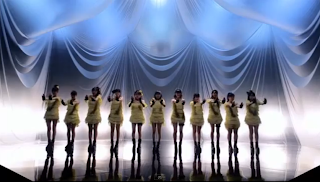 Anyway, looking back at the video that is Kimi sae Ireba Nani mo Iranai, another long-ass title (thanks, Tsunky-poo), I still feel the same way about it from my reaction video that I did, and surprisingly... I enjoy it. A lot.

Yeah, you take that, you random rant you... I still do not regret hating on that crappy ass preview, though. It does not do this song any justice whatsoever. 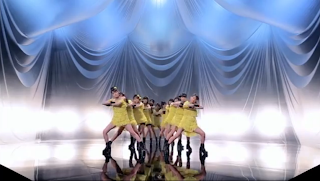 Now I am not saying that this song is good; I think it's okay, because it certainly ain't no Brainstorming in my opinion, but I do enjoy it. Why? Well I put it down to the mix of game influenced sounds as well as the random Rave styled talking that is mixed in there - two things that I like. Rave was a part of my childhood, or at least the music was, thanks to my older brother and I thoroughly enjoy the sound that rave music has, so to hear some of that thrown into this song (though pretty random, admittedly) was quite nostalgic for me.

... Fuck, I am having a lot of nostalgic moments this year, aren't I?

Tangent run, the game like sounds are also pretty nostalgic. I think that Tsunku's been playing some Mario and Pokemon whilst listening to some quality Rave music, don't you? 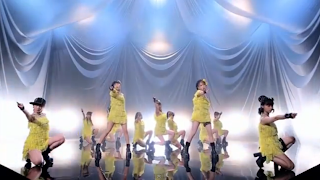 The video itself is pretty okay, but right now I can't say much because it's a freakin' dance shot, though I find it quite cool. Once again we're going with the formations and showing off that Morning Musume are giant enough to do those kinds of things. The only thing that annoyed me with the formations was that I could not see some of the girls whenever they went to the back. That's my only problem with the dance so far. The rest of it is pretty good; loving the boob thrusts, though I feel like I am watching the girls attempt to be sexy when really, they are not. Fail. 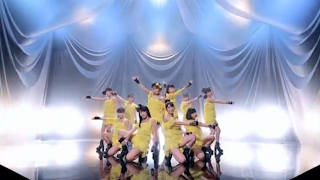 The costumes are meh; I still think that they look like a Pepper Keibu rip off crossed with Ambitious! Yashitenki de Ii Jan. The video also has a similar feel to both those songs in my opinion, especially in how the dance goes; it feels quite old school actually, reminiscent of Reina's... okay, I won't say the time she dominated MoMusu because that's been happening since she joined, but it's reminiscent of a time where she was shoved in our faces more than she is now, cos of the newbs and all, though surprisingly Winky isn't as dominant in this song as she could have been.

Hell, even that Shrieking spoon isn't as dominant. If anything, Ayumi is the most present girl in this song. She nailed it!

By the way, why did they raid the C-ute shoe closet?

Also, here's a nice random comparison from my Neru Baby... I don't watch V-U-Den because that unit contains Ishikawa Rika in all of her horror, but I was surprised by the costumes.

H!P stealing from H!P. Oh wait, I forgot that they aren't original. Whoops.

Anyway yeah, I am glad she posted the comparison, and I thank her for allowing me to use it here. Anyway, back to the post/review/whatever I am doing. 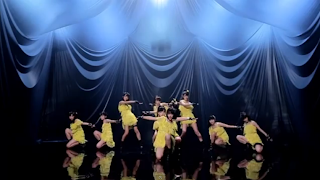 I also wonder why they decided to borrow One Two Three's curtains and dye them, but honestly, I don't mind; anything is better than a green screen at this point. 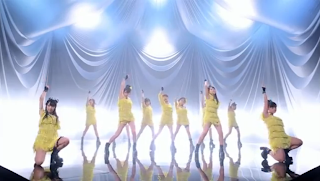 Still thinking about the costumes and leaving the curtains aside, I also quite like those garters that Reina, Iikubo and Eripon are all sporting; nice way to make certain girls stand out. I also don't mind those hats that Reina, Iikubo, Eripon and Haruka are also sporting. I know some are not too keen on Haruka's hat thing right now, but really, she's trying to stand out as the one who is the 'brother' of the group, and if she's forced to wear a dress then she needs to have something to make her stick out...

And yeah, I like the hats, but that garter on Eripon's leg pleases me a damn lot more I tell ya. 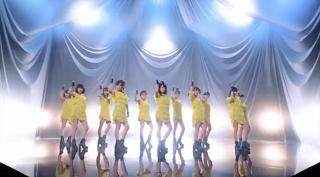 All in all, I am quite pleased with this release; the costumes are still questionable, but I have enjoyed it. The music is, to me, pretty damn good, but that's because it has two elements that I enjoy a lot. It's pretty catchy too. I can't say much on the dance yet other than that it's passable, and that I love the random boob thrusts. It makes me laugh a little to see the children trying so hard to look mature.

I know that a lot of people are on the fence about it, and I can kinda understand that... Okay, I don't understand it at all, but I quite liked it. Granted, Reina and Riho have returned to sounding like dying cats and squirrels, and even Sakura sounds like crap in this, but you don't hear them too much to really care any more. I do prefer them in Brainstorming or Brainstorm, but I also like the sound of this song. I can pass on the bad vocals in this because, to make up for it, it sounds pretty decent to me and both Ayumi and Mizuki rock their lines.

But it isn't as good as the main A-side, Brainstorming. Yes, I like this one, but Brainstorming is a winner. What do you think?

Also shout out to Gio! Thanks for wanting my opinion ^O^ It makes me happy!

But seriously, I enjoyed this not because I barely hear Riho but because I actually dig the song and the elements it has. It was surprising how much I enjoyed it, but I do like it. But I doubt it will become a staple sound for me.

Now to wait for the MV in all of it's dance shot, close-up glory... I am not anticipating anything creative, obviously. This is UFP guys, not Stardust Promotion.