So I stayed up to watch the SATOYAMA Hinamatsuri ustream, and boy was it a disappointment; note that this is the first ustream I have stayed awake for, and most of it was basically hour long breaks and MV's on a loop, not that I minded DIY♡ and their delicious legs on a loop, or Tasaki Asahi's Tegami spinning over and over again. I didn't mind that; it was the hour of watching it and waiting for the ustream to start up again after a half an hour of watching the actual ustream that pissed me off. Never again, I say.

That and the excessive amount of talking (except the crucial parts), the repeat of Peaberry effing singing the same song twice (for fucks sake, I don't want their boring ass song, no matter how good Riho finally sounds!) and the constant bloody lag. And the stupidly long breaks, too. Hi... I don't want to waste my precious sleep, you know!

BEHOLD, FELLOW WOTA! The SATOYAMA Movement now has three... yes, I mean it, THREE new units under their wing! Check it out! 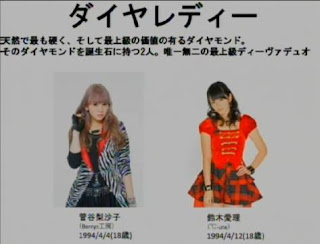 The first of the three surprise Satoyama units is Dia Lady, short for Diamond Lady. Do you know what my first thought was when I saw that name in English? Diamond Sucker. The name that Isilie calls Risako sometimes. Or at least I think it's Isilie... anyway, they are called Dia Lady and the unit is made up of Sugaya Risako (Again, Diamond Sucker) and Airi (perfection).

I'm actually glad to see Risako in a unit, though I may regret this later on when she yells her way through their debut song. Who knows? I may come to like her more and more, and her debut into a sub-unit has been long overdue. As far as I recall she was last in Guardians 4, right? Airi you could totally swap for someone else, but whatever.

I want Diamonds in their first single, by the way. 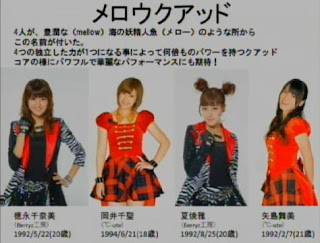 Next up is the second unit, a Quartet named Mellow Quad, a group I may begin to forever mistake as Melon Quad. It could work, considering we have the boobs of Chisato in the unit, but whatever, I like that the word Quad was thrown in there to tell us that they are made up of four girls. This unit has Chinami, Chisato, Miyabi and Maimi in there.

Why the fuck is Miyabi in there? Nothing against her or her horsey antics, I love Miyabi, but seriously? She is the front girl of Berryz, she is also in Buono and also DIY♡ - why the fuck do you want her in here? I know her voice is lovely, but please, give the girl a break and give her a carrot too. She needs a damn rest! I could say kick Maimi out too, but I don't like her anyway, however she does deserve to kinda sorta be in a unit...

But honestly I don't understand why 3/5 of DIY♡ are in this unit. Chissa, fine, she's sexy as hell (minus her Tsunku hair right now) and has good vocals, but the other three? I can pass on them, put them in another unit and give Zukki, Kudo and Rina a chance. Dude, that is my dream unit! 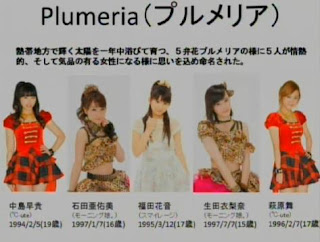 And finally we have Plumeria, the unit name that makes me think of a damn peacock or plums. Sadly none of these girls have plums on their chest area's... oh well...

Anyway, this is a five-nin unit, made up of, whadaya know, 3/5 girls who are already in Satoyama units! (This actually may just explain why DIY♡ and Harvest aren't getting new singles, actually...) Or were... who knows? Anyway, three girls here are/were already a part of a Satoyama unit, with Nakky being in DIY♡, Ayumi and Eripon in Harvest, and Fukuda and Mai in, well, nothing. Until now, that is. These five make up an okay looking unit I think, but it seems to be based more on the less vocally talented girls of H!P (minus Nyon ofc). Sadly, it also has one of the members I want to whack around the face sometimes, she's that annoying (Nyon), but also brings in my Oshimen of MoMusu, one of the sexiest C-ute members, a Baby Predator and an Idol who recently grew into her head. Oh, and Cinderella Revolution.

This unit is devoid of anything Berryz though, not that I am complaining; It's a nice little mix of girls I guess.

Anyway, those are the groups, and seeing the girls in those groups does make me wonder; are DIY♡ and Harvest now defunct groups, because if they are, I am so fucking pissed. Why? DIY♡ was one of the single best things in the SATOYAMA movement really. They had the best gimmick (legs) and the catchiest song, so I do wonder why SATOYAMA would pull the plug on them whilst keeping Peaberry or GREEN FIELDS, the two units who are a tad more boring (especially Peaberry in terms of personality and how much it doesn't have it). Well... this is just speculation, but I am beginning to believe it more and more, and it might have even been said in the Ustream (DIY♡ and Harvest were actually mentioned, so that may be the bit where they say they are dead groups now). Again, speculation...

Also, it seems that the SATOYAMA Movement are moving onto Sato-umi. Abandoning the land in favour of water, aye?

That, or Sato-umi is a different project to Satoyama, and so the groups are still intact, but DIY and Harvest are designed specifically for Satoyama and these new groups are there for Sato-umi.