So many of you are going to hate me for this, but honestly, I need to get this off my chest, and get it off my chest I will...

I need to rant... I really really need to rant, because frustration is really heating up inside me now, and not just with this group but another group as well... but this needs to be written, to be heard so that I can be a bitch!

So, there is this Lemon song on AKB48's latest single, Eien Pressure. The single itself is one huge disappointment, with very little quality to it at all which makes me genuinely love the single, but right now I am talking about this song, the Lemon Wedge song... the tie-in that these girls have with this Lemon dude. Yeah, well... I heard the song before I actually tuned into the PV, but I already knew what their costumes looked like, and honestly, I thought that they looked similar to Morning Musume's Pyoko Pyoko Ultra outfits, but because it was a tie-in, I put it to the back of my mind. No way was AKB copying MoMusu, right? 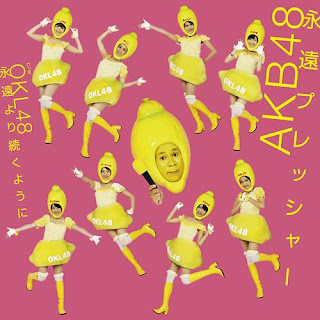 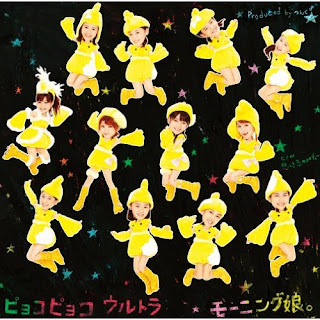 Am I seeing things? Am I really seeing this, or am I just so high on Irn Bru that I have begun to hallucinate, because my lord, the Limited D cover to AKB48's Eien Pressure looks just like the Limited C to Pyoko Pyoko Ultra, except with uglier costumes, a different background colour, less creative poses and some creepy ass dude's face in the centre.

Am I actually seeing this!?

You know what, guys? I told myself this after Pyoko was released (and probably said it somewhere else, but who knows, cares or whatever) that if AKB48 were ever to pull off this kind of stunt, people would praise it, they would pay cash happily for it, because AKB48 did it. Whilst a shit ton of people dissed MoMusu for taking a new (childish, though more creative) direction with chickens, stated that the song was crap because of the costumes, I felt that if AKB48 were to do it (like they did with veggies) nobody would complain.

Well, I fucking called it by accident, didn't I? Because at the beginning of the year, MoMusu bring out one of their most creative, childish and original songs, and at the end of the year AKB give us a piece of Lemon Wedge that looks similar in costume and single cover?

My god, I hate myself for calling it without knowing... URGH!!!!

IT'S SO FREAKING SIMILAR IN COSTUME IT IS NOT EVEN FUNNY!!!

And don't get me started on the mother-fucking Lucky Cha Cha Cha! layout OR similar overalls/dance costumes, because bitch please, I know similar shit when I see it

I actually don't understand how no one is ripping this one apart (unless they are, and if you know where, please link me), because whilst the similarities end at the costumes and overly similar CD covers, it's pretty apparent that Morning Musume have the creative and original upper hand here! Their video is so much better to watch, there is more to look at, and their song sounds so new and fresh and genki awesome spectacular, whilst AKB48 sound the same. This song is basically Eien Pressure on a candy high, except that it gets too boring too quickly and too familiar all to suddenly. Their costumes are also ugly! I mean those damn lemon heads, the hell!? At least MoMusu looked adorable whilst looking like idiots running around, because with AKB they just look like idiots.

I'm pissed off because MoMusu got so much shit and slander for Pyoko, but AKB are probably being praised for their diversity.

Well, after the sudden breakthrough in Electro Idol that is Uza, courtesy of Morning Musume starting this electro tend, it seems that Aki-P still enjoys borrowing idea's from Tsunku, because this is too similar for thought, though MoMusu have the better PV, the better song and the better costumes.