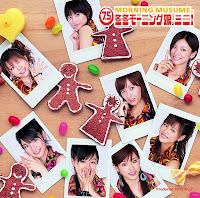 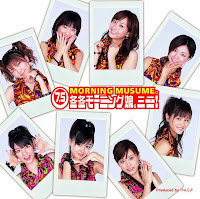 It's a week until Christmas, which ultimately means that I dig out the Christmas songs, Japanese or English, and rock out around my room whilst my parents get annoyed because they're absolute Scrooges and don't appreciate the joys of Christmas or how genuinely catchy and annoying Christmas songs can be. Tch, parents.

That aside, here's a mini-album that I have been loving this year in terms of Christmas tunes; 7.5 Fuyu Fuyu Morning Musume Mini! is the first and only mini album by my favourite girl group, which is actually quite a pity, because it's actually a very good mini-album filled with some delightful tunes to get you into the Christmas spirit.

So, let's take a look at this little Christmas treat and bring out our Christmas Spirits and Seasonal cheer, shall we? -noms gingerbread cookie-

Aruiteru - I either love or hate this song, and that's mostly to do with Koharu. Sometimes I can loop this song without getting sick of it, and other times I absolutely loathe it, because Koharu is a terrible singer here and you can really hear how terrible she sounds in this song. I love Koharu, but I had to get that out there how she can make me really want to kick this song.

That said, I do really like this song and genuinely enjoy it; it's a great song and I actually wish that Morning Musume would go back to this sort of gentle sound at some point. It's calming and very refreshing, and it complimented almost everyone's voices at the time it was produced. The lyrics are also really nice, and I can't be the only one who digs the simplicity, picturesque look of the PV.

It's a good song, but again, I can hate it just as easily as I love it. It depends on my mood, really.

No matter how infuriating I can find Reina sometimes, I absolutely love her voice (when she stops to breath and doesn't sound like a dieing squirrel). I also absolutely adore this song, and let's be honest here, it's my favourite from this mini-album. Reina sounds fantastic, and the arrangement of the song is really nice and Wintery and pleasant, but still up-beat and cute. This song really shows off Reina's voice well, and I can't get over how happy and carefree she sounds in it!

Again, I love this song, and it's my favourite solo from Reina so far; she really sounds great here and I think that this is one of her better songs that she has sung. It is a typical Reina song, one which shows that girly and energetic side, but still allows her to sound powerful. I adore it, and when she sings this, I adore Reina. Sadly, I don't think that she sings it enough, which is really a shame because it's an amazing song.

Here's a song I never really cared for, mostly because I hate MC's in songs that take too long, and whilst I love Gaki, the MC in this song takes far too long to the point where I skip over to the next song, which is a pity because this is a gorgeous song when you eventually get to it, and Ai sounds absolutely mesmerising.

It's absolutely gorgeous after that stupidly long MC, and Ai basically compliments the entire track with her beautiful and power-filled voice. You can hear the passion and happiness in her voice and you experience her feelings just through the lyrics and Ai's beautiful voice. It's a lovely song to listen to, and if you can sit through and MC segment, I highly urge you to listen to this song, especially the Ai fans, because it's a spectacular performance from Ai. She may not have ever been my favourite member, but damn can this girl sing. Really, she should have received more solo songs, because her talent is unrivalled really.

Just listen to it. It's a beautiful song, so go and experience the beauty of Takahashi Ai's voice this Christmas.

Here's another great song from this mini-album, and one of the more overplayed tracks from my Christmas playlist this year. I've never been a big fan of Mikitty, but this song really does make me love her voice more than I actually do. It also makes me love Chisato and Mai more as well.

This is such a Christmassy song. It sounds so wintery to the point where I'm reminded of snow, candy canes and building snow men like I used to as a child. Out of all the songs on this album, I think that this one has to be the most Christmas-based in how it sounds. It has a very friendly feel to it in sound and tone; the vocals bring about a certain tone of Christmas being a celebration for both children and adults, with Mai and Chissa being the children and Mikitty being the adult.

It's a great song, and again, it makes me really appreciate Mikitty and her voice, something I very rarely do.

Now here is a song which I continuously ignore, and not because it's terrible; far from it, actually. No, I ignore it at Christmas time because this song sounds nothing like a Christmas tune, making it the odd one out on this mini-album. It's a pity, really, because this is actually a really good song and has the three best voices of Morning Musume (in my opinion) at that time together singing a very powerful, cool song.

I do give props to Tsunku though for making this the one stand-out song on the mini-album, because it's an amazing contrast to the other songs which all sound joyful and Christmas-filled. This one, though, is a little bit more mature and toned down, with only a few effects in the instrumental giving away that this is a winter sound.

It's great, but I don't think that it fits with the tone of the rest of the mini-album. I love all the girls and their voices present in this song, though, but again, it doesn't fit with the cheerful, cute Christmas sounds that the other songs have.

I've pretty much said what I needed to say about this song from the Cutest MoMusu Duo, but I will say it again; I love this song. It brings my Christmas spirit right up when needed, and even when it isn't Christmas time, I listen to this song and love it. I love the absolute joy and cheer this song brings me.

It's extremely happy and childish, very festive and perfect for the Christmas season. I love the energy and happiness that Koharu and Sayumi were able to bring into this song, and I appreciate how cute it really is. It's the perfect Christmas song to get you in the mood for Christmas, which is the reason why it is my favourite Hello! Project Christmas song. No other song has beaten it yet, but even if I did find another song as my top, I would still whole-heartedly adore and enjoy this one.

Morning Musume's first and only mini-album is such a fun little cookie, and I honestly wish that they would bring another Christmas/Winter themed album out sometime soon with the new line-up, because here we have a nice little treasure trove filled with goodies to get you into the Christmas mood, and it would be great to add more Christmas filled songs to the Morning Musume discography.

It's a pity that this is the only one, but here's to hoping that Tsunku will bring us more and shuffle the girls around a bit for some holiday filled songs!

Which one is your favourite song from the mini-album? -gives you a gingerbread cookie-