My opinion is my own, and no one else's. You have come to this blog searching for an opinionated person's views, right?... Well, that's what you're getting! If you feel offended, then turn away, don't read and just ignore me. Don't try to start a fight with me because my opinion sticks unless I change my views on my own terms. Enough said~

So, before I dive into my first review for this challenge, I would like to thank everyone who sent in their PV requests for me to review! I've noticed quite a bit of SHINee in there, and was surprised to also find a BiS request (my sister went "Oh my god..." when I told her it was My Ixxx). Quite a few of these PV's that you guys have suggested are definitely out of my element of what I watch, but I can't wait to tackle them all!

Now, just a reminder: I may not review all of these PV's, as I had said in the post concerning this PV Request Week. I will review the top 3, or the 3 that I think I should review if you have added more than that number of video's to your list. If I decide to review them all, then they may not necessarily be in a specific order... This PV Request Week might also last longer than a week, it depends.

That all said and done, let's get onto the first PV of this Request Week, shall we? 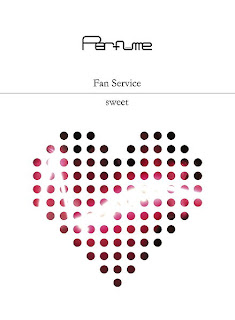 My first request for this week is from Nia, who knew all about this plan before I had even launched it, and she has requested Perfume. Considering she is a massive fan of this trio, I am not surprised that she suggested five of their songs for me to review... she even put them in order of when they were released.

Anyway, as you all know, I am not a Perfume fan. If my lack of Perfume reviews (this being my first, actually) indicates anything, then it indicates that I don't pay attention to this group, something which Nia is probably going to try and change thanks to this Request Week. That said, I have watched at least one of their PV's beforehand, but it never truly converted me.

Is this Perfume's chance to convert me? Who knows, but challenge accepted, I guess! But that is what this week is all about: Trying out new groups, and seeing if I like them, and first up is Perfume and their song Chocolate Disco, the first on the list that Nia suggested I watch.

And why did I choose this song, you ask?

Well, you'll need to wait and find out, and see what I think at the end! Are you ready for a Chocolate filled Disco? I sure am! Bring on the chocolate!!! 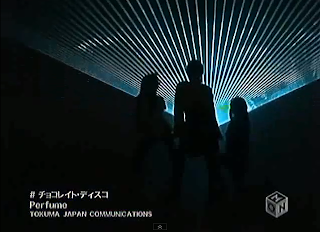 The beginning is annoying, it's too freakin' dark for me to screen cap anything!!! problem of my life 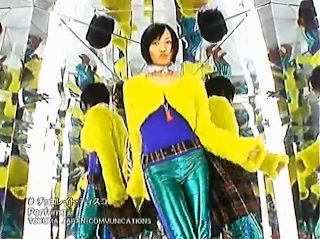 Did you kill Big Bird just to make him into a jacket, Nocchi? 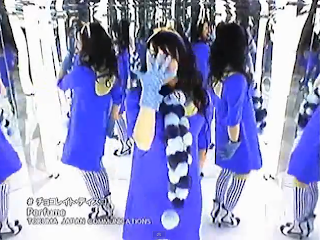 A~chan: "I don't want to see that hideous outfit!"

Look, I'm even learning their names!!! 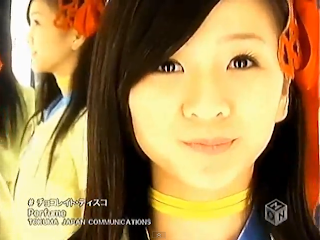 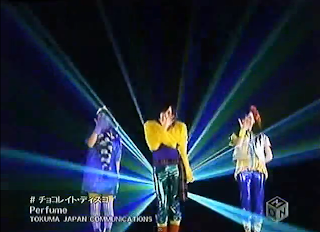 None of the Perfume girls want to look at Nocchi's atrocious outfit. 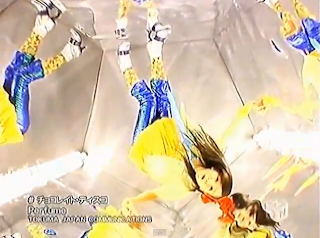 Kashi: "I feel a little sick from all this spinning..."

Okay, I just noticed Kashi's pants, but they look better, maybe because she doesn't have Big Bird's feathers as a coat on? 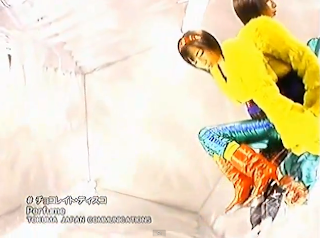 Nocchi: "I hate these clothes just as much as you do..."

Orange boots!? What the hell wardrobe people? Where is your fashion sense, she looks a little like Batman's traffic light sidekick Robin with all the colour you have thrown on her! Shame on you!!! 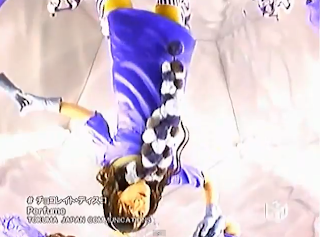 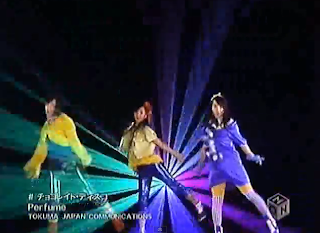 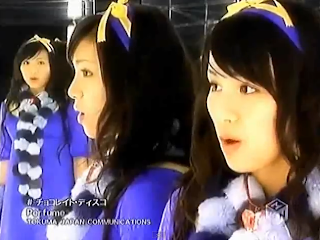 Is it winter in here or is A~chan just making sure she's warm enough? 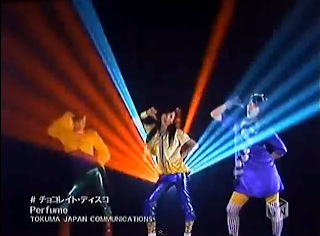 Damn this PV has more useless effects in it than One Two Three... and that's a hard task to do! 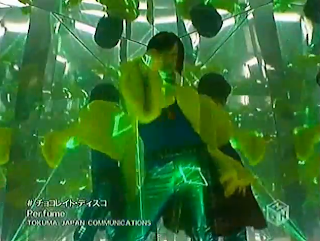 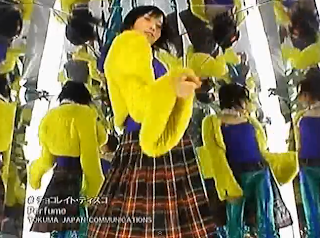 Nocchi disagree's with my negativity. Tch. 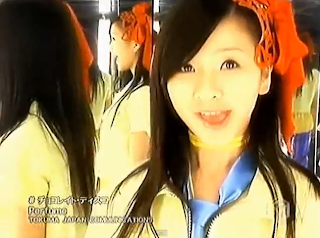 How derpishly cute!!! Made a new word!!! 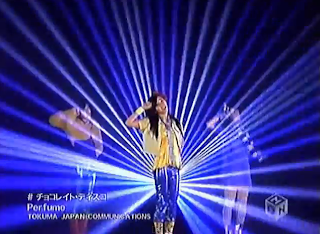 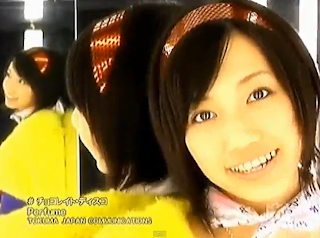 ... Well, Ayumin has some shark competition going on here now... 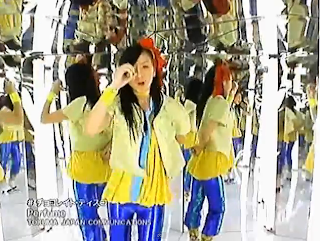 Once you see those pants, you are immediately drawn to them, I swear... 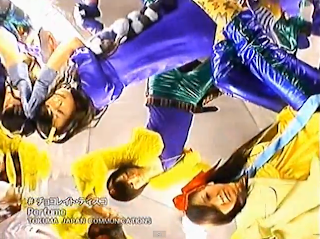 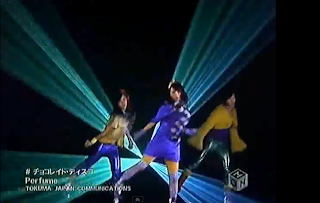 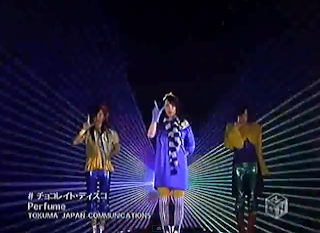 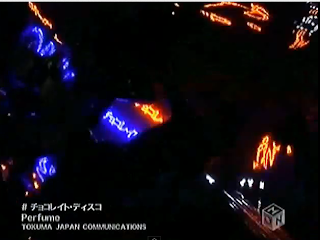 Finally, this horrendous Wardrobe malfunction of a PV has ended... Heeeeey where was the chocolate!?

No, I'm serious, I found it to be a pretty decent PV, despite how much the lasers and lights somewhat annoyed me and reminded me of the terror that is One Two Three and their sparkle overload. In fact, it reminded me of one giant 90's Disco, like the Disco parties I had as a kid. Fun memory, but also extremely cheesy and over the top.

I think my main dislike of this video, though, is the beginning and the points where everything is so bloody dark to the point where you can not see anything but the disco effects and the shadows of the girls. That was just plain annoying, or at least for me, because I do like to see things in the video's I watch, so the beginning was a major turn-off point for me, and I probably would have turned off the entire video if it had not been for the song itself, which yes, did save the video for me.

Not that the PV is bad, because there are aspects that I really do like about it... mostly, the aspects that don't include a strobe light, such as the mirror scenes (OMG IT'S SO BEAUTIFULLY BRIGHT!!!) and the scenes where the girls are trapped in a box, trying to escape as the camera turns and makes me feel dizzy. Yeah, those scenes were nice, and I really enjoyed them because the girls look great there (despite the costume malfunctions on Nocchi's part) and they have great expressions. Kashiyuka takes the cake for her expressions, though, because she is utterly adorable here! She has an extreme look of innocence in these video's which makes her feel so approachable and kind, and it's something which has attracted me to her in this video. Her youthful look is so appealing, and so adorable... Eye candy, yes she is, favourite material, something she could be, who knows?

I also quite liked the look of Nocchi in this as well, she's actually quite entertaining to watch in this video. I guess there is something about her which attracts me, and the same goes for A~chan, though she didn't stand out to me fully through this PV. No idea why, but I actually quite liked all the girls in the video, but Kashiyuka entertained me the most. She'sso adorable and has some really great expressions.

Other than the scenes with the girls alone, I did find the dance scene to be a nice addition to this PV. Despite the lasers (they weren't so annoying, actually) in the background, I really enjoyed the girls' performance as a group. Yeah, there could have been more energy, but it's pretty cute regardless, especially the little shoulder shakes and the shimmies the girls continuously do throughout the dance. It's adorable, and quite funny, to watch.

Now, the song itself is probably the highlight of this entire video. It is what kept me interested and kept me watching the PV despite how much the opening annoyed me. Why the song? Well, I will admit, I have heard this before... and no, I did not know that this song was by Perfume, I just heard it quite a few times in the past from a youtuber who used this song as an opening for their AMV's or dubs, and that is why I stayed, because I had finally found a song which I wanted to know the name of from way back when.

Anyway, this song is very cute. It's definitely not a disco song (the PV takes care of that aspect, though), but that's fine because it's a nice song to listen to, and it isn't too annoying either. It can get repetitive, yes, but it's fun and quirky to the point where you don't care. That, and it's easy to chant along to for the chorus, something which easily entertains me and keeps me enjoying the song. It's definitely catchy, and the song itself is quite memorable, though I find it to be quite a tame song in terms of how energetic or annoying it could have been. So yes, I do like it, and surprisingly, I barely notice the electro-pop auto tune used here. It just kind of fuses together with the song for me, and it works.

Or maybe I just don't care because this is a song I heard a few times in my past, or because I know what to expect from Perfume when it comes to how they sound. Who knows?

Chocolate Disco, despite the lack of chocolate, is a good little PV, despite the amount of stupid laser effects which annoy the heck out of me. The song is definitely the thing that kept me watching this video, and whilst this PV will never rank as one of my favourites, I find it tolerable... though I do have to ignore the opening scenes before properly tuning into this video, because it reminds me too much of 90's Disco's and how annoying the lights were back then.

Thank goodness for the song, eh?

Chocolate Disco, the Disco without chocolate.