All thoughts and opinions on this group, their songs and PV are entirely my own and no one else's. Please think how you want about something, but don't expect others to feel the same. How an individual feels may bring insight to things you didn't see before, whether they are good or bad insights. If I am positive or negative, take what I say with a grain of rice (or something) and add it to your own opinion and let's see where we go from there. You can dislike what I say, or you can like what I say. Whatever YOU think, it is up to you! 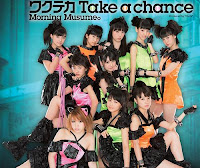 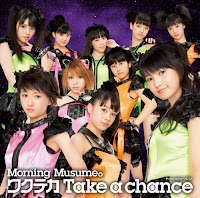 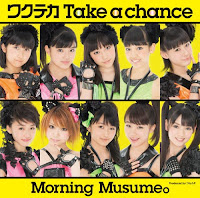 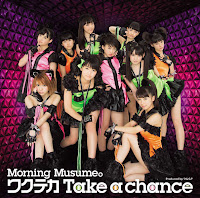 I've been holding off on this review, mostly due to a busy lifestyle, the fact that I haven't had time to write on this blog, and also because really, let's be brutally honest here, the PV did not impress me in the least.

... And I find that a little sad (for myself) that I have come to the conclusion that I don't care about a PV for a song I actually quite like.

I guess it's to be expected now though, that UFA (oops, I meant UFP, cos y'know, they actually promote now) will continue to churn out shitty PV's filled with effects and nothing else, because it's the direction that Morning Musume is currently going in: The Robotic Era. Oh boy, sparkles and auto-tune, here we come...

I'm not excited for this era, as you can see. I was all for the Pyoko/Creative era, but nope, Robo era here we are... 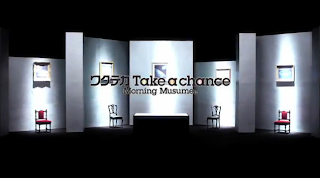 Now, I actually love this song - it's a great song! It's catchy, fun and a pleasure to listen to, something which One Two Three wasn't when I first heard, and I was genuinely surprised by how much I came to adore this song after my major hate for the previous single and the horrible auto-tune that came with it. So, of course, I was really anticipating the PV for this great song!

... Hi, UFP. Thanks for Fucking that one up. You should really be called Up Fucked Promotion.


The PV is such a downfall since the creative Pyoko Pyoko Ultra came out, and judge me you may, but that song and video had a real creative flare to it which actually surprised me and won me over a lot, which is why I love it so much. Sadly, it has also been the only real creative video to come out of UFP's ass since Takahashi Ai's graduation, and Kono/Kare to were only creative because Ai took creative control and made those songs awesome, even with all the CGI glory.

That, and the fact that there is little to no group chemistry in this PV at all. Actually, I haven't seen group chemistry since Pyoko, where we actually see people interact with each other. Nice fuck-up there, UFP. You made this PV lame.


Okay, so I watched this PV for the first time with my sister, and even recorded a reaction video - that video will soon be deleted, and will never make its way to youtube because honestly? There was no reaction. I was just utterly bored by it, and extremely disappointed. Such a cool song, one which had an amazing choreography to go with it, was totally destroyed by the PV and how lazy it was. Screw the fact that the bloody effects 'cost money' - those effects are what cost this PV a chance at being epic.

I mean, the UV lights were pretty good, so why not keep those and use no effects? There's just too much going on, with so many lights, sparkles and the light things during the dance shot of the MV. It's almost too much, really. Then again, even the UV lights don't work well for this video because they wash the girls out, especially Masaki, who looks less than appealing in this video... and that girl is darned cute! How the hell can you wash out Masakissu, you dicks?


Honestly, it's almost like UFP are throwing the effects around because they are trying to cover up the lack of group chemistry this group has now that Gaki has gone...

Oh wait... that's exactly what they are doing! 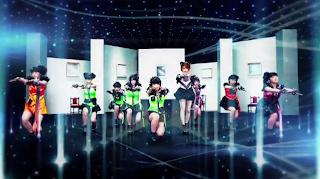 The sad thing about this PV, other than the lack of group chemistry and the stupid amount of ugly effects thrown into it, is the fact that Ayumin isn't a part of the dance shot... which may be the reason why this PV is only temporary, but yeah, it's sad. Ayumin loves dancing, there's no denying it - she loves it more than RiDOS does, and is a better dancer than her too, but it was sad to realise she wasn't a part of the dance. Poor Ayumin, poor Baby Predator. Hopefully the real version of this MV will include her dancing, and also have less of the hideous sparkles and effects, too...

It's just so... messy! This is probably one of the PV's I will want to totally avoid at all costs if I can, because I just find nothing in this video appealing other than the girls themselves during individual shots... and those are the table shots, weirdly enough. That has to be the one interesting scene, other than the fire scene which is totally pointless because it only shows Sayumi and RiDOS in the fire for all the shots that we get of the fire. Why? WHY? UFP, you are a bunch of fucking dicks, you know that?

I have serious issues with UFP, sorry guys! xD

Anyway, this PV doesn't really interest me at all - sure, the individual scenes of the girls sprawled on tables are appealing, but that doesn't make up for the rest of the PV. The crappy costumes, the crappy PV... it doesn't do justice for a great song and a great dance. It just seems like UFP are trying to hide the fact that these girls don't have group chemistry in their videos right now, or they are trying to take on a Perfume concept and are totally failing. Actually, I think that UFP are imitating Perfume, but with a cheaper outlook, because when I saw the video for the first time I thought that Perfume could do this, but better.

Still on the topic of epic songs (we never went to that topic, actually) I would like to point out something which bothered me during the entire MV, and the song. It's come to light that now, Riho and Reina are sounded spookily similar. They have the same tone, that same sound to their voice... and it's pretty clear that UFP are screwing around and making little RiDOS into nothing more than a Reina clone. There were points in the song where I couldn't distinguish either of their voices from each other... and it's the same with Ayumi too, now. She sounds pretty close to RiDOS' shriek, and it's disturbing. UFP, answer me this... are we ever going to get to hear a true, individual voice from a girl rather than a cloned voice with no personality to it whatsoever?

To say I am disappointed is an understatement, and honestly, if the real MV comes out with only an edited dance shot, I will be pissed, because these girls can offer so much more than sparkles and UV lights that wash them out. They can be entertaining and charming, they have proven that in not only Pyoko but also Ren'ai Hunter and even The Matenrou Show and One Two Three. You just have to let their personalities shine, and by downplaying them to make money off of this 'cool' Morning Musume with borderline Potato Idol personalities, you won't really get anywhere with the people who actually care about personalities and what not...

Oh wait, I forget. Potato Idols are all the rage, aren't they? Hence why RiDOS is in front. My bad, guys. Ma Bad.

This turned into more of a rant than I wanted it to, but really, I am not a fan of this PV. UFP are just using too many effects now, and it's sad to say that the lack of group chemistry and energy is high in this video and really disappoints me... Actually, I'm being driven towards Dream5 more than ever now thanks to the lack of group chemistry and energy, because that's what I like in groups. Effects don't always grasp people, and neither does UV lights.

A great song and a great dance destroyed by UV lights and sparkles... what a major downfall from the creativity that was Pyoko and what was the cute era of MoMusu from when the 9th gen joined.


... Thank Lord Gaki I can listen to this song without watching the horrible PV.