My opinions are indeed my own, and you may not agree with me, but that is how life works. In the end, this is my blog and this is where I post my opinions. Thank you.

I swear, I'm never going to be happy with Nogizaka46. No matter what, I am somehow disappointed with their A-sides. They will either bring out a crap song with an equally crap PV, or they will finally bring out a good song, but the PV will turn me off of the entire song anyway.

For crying out loud, NG46, when will you do something right for me? 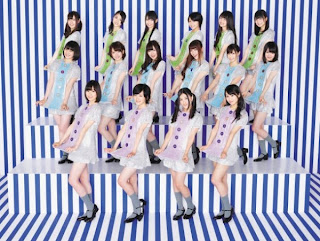 I mean, I'm not complaining about the song that much - for once, Nogizaka have released a decent bloody song, but the PV... it's just horrible in my opinion. I can see a lot of other people liking it, but I don't! The glasses, those horrible wigs - what the hell? What were the directors thinking when they decided how they would present a decent song in a video? I was hoping for, oh I don't know, BICYCLES? Not bob wigs, chic glasses and retro style clothing or backgrounds.

Oh boy, don't get me started on those damn wigs...

For one, they don't suit all of the girls - some, yeah, but the others look plain stupid with them on. Then the costumes... the first set, where the girls don't wear horrid wigs (thank lord) remind me of Clown costumes that someone dunked glitter over, and the second set are something I just... well, I don't like them, but they aren't the worst the girls have ever had. Either way, these two sets of costumes just continue to fuel my belief that Nogizaka46 are forever doomed to get the horrible scraps for costumes that AKB48 won't ever have.

Honestly, I was so hyped up for this PV after hearing the song. I thought 'who cares about the shitty costumes? They finally sound decent!' and was so happy to finally find something to like about them, but then... well, this happened! This atrocity of a PV came into existence, and I just couldn't help but dislike the PV because I just... yeah, I hate it. It's disappointing, I don't like the costumes, I hate the lack of plot or story, I hate that they wear wigs that don't suit them and I don't like the annoying pink hue that surrounds the entire video.

The only redeeming quality of the entire video are actually the scenes where the girls are still, eating ice cream and looking cute - why don't we have more of those scenes, because they look like the only scenes that got a budget, but we sadly only see a few seconds or minutes of them during the entire video. WHY is most of it shitty dance scenes?

Aki P, we know you have the bloody money to create good music and good videos for this group, and yet you don't use it. You just continue to give them shit quality videos and shitty A-side's. Where is your creativity? You can give us something better than this Baby! Baby! Baby! dance shot/retro-feel rehash (Baby! Baby! Baby! is better though... by fucking far)

You know what? The day that this group does bring out something decent, something better than what even AKB have done, I might just have a heart attack, because this group is an absolute bore and a disappointment.

The only thing they have recently done right is that Twintail song with Mayuyu, and that's only because Mayuyu was in it, I'm sure.


So much for a bloody Rival Group.