NO NAME: Because it's more Creative than adding a 48 at the end - 'Kibou no Tsuite' Single Review

All opinions within this post and on this blog are my own. I created this blog to freely express my thoughts and opinions on groups I like or dislike, and so I do ask that you respect my opinion. If you feel that I am a hater, fine, but don't hate on me for disliking something you like, because we all think differently. Thank you~
I was pretty sure that I would never write this up, because recently I've been a bit stalled for time, what with work and actually crafting a life for myself (something I never wanted to happen, lol), but it's late at night, I have a day off tomorrow, and I don't want to go anywhere... so guess what? I'm going to tap tap tap away on my laptop, and deliver a new review, because I have been far behind with a few reviews I've wanted to do, so, let's start with this one, shall we? 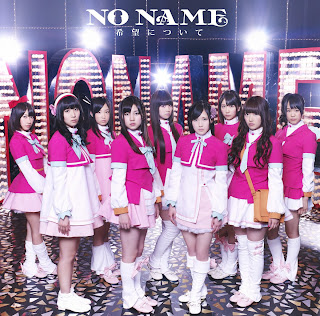 No Name, how freakin' unique... it's like Aki P really couldn't be arsed to come up with anything other than this, because he certainly couldn't come up with something tagged beside '48', right? Well, creativity aside, this group was created for the purpose of the AKB48 orientated anime, AKB0048, set way into the future where Idols are seen as terrorists (yeah, I can see that already: Oshima Yuko looks like a Mafia boss anyway, right?) and are pretty much illegal, though still greatly appreciated by Wota.

Admittedly, I haven't watched this anime. In fact, I barely watch anime any more. The only one I remotely got into as of late was Aria the Scarlet Ammo, because that was pretty cool, but nothing else really. Then again, I'm not one to fawn over everything AKB48 related. They tend to bore me a bit.

Anyway... No Name, a group which consists of the main AKB voice actresses for the main characters in this anime, a group which actually introduces us to some fresh new faces that I don't think I've really seen before, with one all too familiar face up in the front, leading the group like she seems to do quite a lot right now. Yeah, that's right. The Creeper. She's back, and she's ready to be the Front Girl in this group, because that other one just isn't enough.

Now, I love Mayu and all, but I already see enough of her in the front. Fine, she's a main character in the series, but she is also the second main character. I would have loved to see less of her here, because she is already a 'soloist' and already has one other group which she is the face of, and she will pretty much be the new face of AKB when Yuko jumps off the boat and swims away to greener pastures alongside Atsuko, so I really don't get why we need more of her in a group made for an anime...

I'm really going into a rant rather than a review, aren't I? Anyway, time to stop complaining - let's introduce the track listing for this single, shall we?

The title track was a lot cooler than I expected, and a lot less anime-like than I thought it would be, though of course it is still Idol music. I actually quite liked this song at first, though it slowly dwindled away the more I listened to it, because whilst it is good for an anime song, it sounds a bit like something else from AKB48 that I have already heard before, though I don't quite know what it is yet... but it's still a nice song to listen to, and the unexpected 'dark' Idol tone it has was rather surprising yet also refreshing to hear.

I will admit though that this song has some really cool guitar rifts in the instrumental, bringing a lot more power to the song and complimenting the softness of the girls' voices throughout without overpowering them all. That would probably have to be the part I like the most, but for me, this song is okay at best. It won't ever become my favourite, however I applaud the darker direction the tone of the song went in, because it's a nice change of pace from the cutesy affair we usually get from AKB groups.

The PV is a nice watch too, I will say, though for a PV that lasts 7 minutes, it isn't worth the entire watch: The last few minutes are just the credits, which really do annoy me - why add credits, Aki P? This is not a movie. Anyway, the futuristic holograms were a cool add into the story of the video, and watching the girls struggle to 'audition' for AKB0048 was a nice concept for the video as they became the Idol group No Name. It's a well put together PV, though it did confuse me towards the end with Mayu, and I admit... Mayu as the centre annoyed me a hell of a lot when there is a character who has a bigger role than what Mayu does (Mayu is the second main character, so I see a double centre thing going on, not just Mayu)
Yume wa Nandomo Umarekawaru:
This song is definitely the most boring of the three songs you can get on this single, though I do like that it takes on a more 'traditional Japanese' approach, with a calmer tone and a more traditional instrumental used throughout the song. Now, don't get me wrong, this song is quite nice, but it isn't my cup of tea. It's too slow and boring for my liking, and just drags.
That, and I don't think that the girls suit this type of song, but that is just a personal opinion really.
I really don't have anything to say about this song other than it really is just rather dull. I've given it quite a few listens already, and I still don't see the appeal of the song at all other than the fact that it has a more traditional sound to it than your regular Idol song.
Niji no Ressha:
I do have to question just why Aki P feels the need to continue creating Ue Kara Mariko rehashes, because that is basically what this song is, another rehash of the generic Idol song... but damnit, it does sound good, but that's probably only because I am a sucker for these generic, shitty Idol songs which other people seem to hate. But hey, who cares? It makes me happy, and for me, that's all that matters.
And yes, this is my favourite song on the single, despite sounding like every other AKB48 generic song (so, all of them?) under the sun because of that lovely cheap rehash sound it has! Though of course, that doesn't stop me from rolling my eyes at Aki P for re-using the same old instrumental over and over again, because honestly, I am.
I guess it's the happy sound that makes me like this song on the single the most, because I'm a little weakling for happy, cute songs which are the generic core of all Idol groups. They just make me happy, and I like how sweet and cute they can sound, whether there is a good amount of energy or not. So yeah, just because it sounds too much like Ue Kara Mariko and any other song from AKB, it doesn't mean I hate it, but I also don't love it. I mean, I've already listened to this same song a million times, but with different singers, a different name and a few different instruments thrown in there.
It doesn't stop me preferring this song over the other two, though! So, I'm going to rock out to this song (not really) and kill it by playing it on a loop until it is put to the back of my mind when a new favourite song comes around, which won't take too long, because I'm pretty sure that Gingham Check will come out soon... and yes, that's the other Ue Kara Mariko rehash.
Okay, so what's the final verdict?
It's an okay single, and it will sell well because it's a sub-unit of the popular AKB48, though the songs themselves aren't that great or even strong enough to sell without the brand tagged to them. Of course, the strongest song in this single is the title track, which is surprising as most A-sides are pretty weak in comparison to their coupling tracks, but Kibou no Tsuite is a well-rounded song which has a surprising but welcoming sound that you wouldn't usually hear from an Idol group like AKB48 or their sub units (remember, I don't listen to many of their songs), so I did like that aspect of it. However, I do think that the single itself is weak as well because not all of the tracks are really that strong. Yes, you get three totally different songs, a cool song, a gentle song and a fun song, but I don't think that they are all that great. They are songs which could be easily replaced by another song which is better and nicer to listen to. Basically, they are simple Idol songs which are easy to replace for other Idol songs, but for an anime, they are okay.
No Name are a good anime sub-unit, but I really don't expect them to pull a Buono! and stay around after the anime has had its run, because honestly, we really don't need another Mayu feat. Randomers sub-unit now, do we? That, and AKB have enough groups already, and this groups music isn't that great from what this debut has shown us. Yes, it passes, but I find that it only passes up to an Idol standard.
But that's just me. What do you guys think?
Chiima~