Take my humour with a grain of salt, a pinch of pepper and just a dash of humour, because seriously, if you don't like my humour or my opinion, then you don't have to read this blog post. I want to express an honest opinion here, and I won't let people who love a certain group or Idol give me hate just because they think I should look at the idol in the perspective that they do. We have differing opinions - everyone does, so let me give you mine! OKIES!

I'm currently dieing from Man-flu right now (I'm not a man, but I treat a cold like one) and away from home doing some experience for a profession which I would like to go into in the near-future... kind of. Basically, I'm a runner on a small production companies film set, so I get to make coffee and shiz, though I aim to be a researcher, not a maid. Y'know, great work , when you're dieing of a cold/Chiima-flu and running around after others.

Anyway, as I die slowly, it looks like two PV's have been updated - one send off, one roof-dancing jingle, and I'm going to basically do a quick review or overview of the send-off one, because I wanted to do something before going to bed and waking up to tomorrow~ 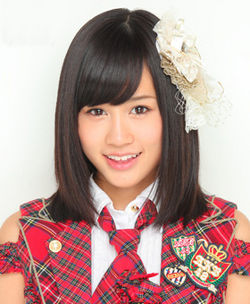 Well, first off... Goodbye Bore-chan, I won't be missing you!

Now before all of Atsuko's fans get defensive over her, I would like to point out that I have never liked this girl, not even when I was a random non-fan of AKB48. I've never honestly seen the appeal in this sack of potatoes, and I doubt I ever will, so for one, I am on the cliff of 'YES! GOODBYE GURL' towards her graduation.. though it will be freakin' refreshing to not see her in future AKB PV's... though I have a worrying feeling that I will miss that boring face a few singles in and wonder where that random girl who was shoved into the camera face went.

I actually decided to watch her PV, because apparently there was a part where she was shipped off into a boat along with AKB's career? Okay, I kid, but seriously, there was something about a boat, and I wanted to watch the video after that. Well, I finally got to see it (a day after info on the PV was leaked) and I have to say, I'm not really that impressed.

... And this is a '48 PV. They usually impress me unless you throw in stupid bikini's during epic death scenes.

Okay, going off the rail there... I didn't mind the PV, and I actually thought that it was quite sweet and very pretty, nicely done, and I liked that Maeda looked less boring than she usually does, but honestly, there wasn't much going on I thought... but the boat was definitely the sweetest part, though it would have been cool if it was sinking too.

I kid, I kid! But I honestly did like the boat scene, it was very nicely done, like saying 'Au revoir, career!" as she shipped herself out to sea. I also liked that the other members were there to aid her in a goodbye, though I would have liked to have seen all the first gen members alongside Maeda, rather than some others thrown in there made up of the senbats/popular-bunch, because in all honesty, Maeda has history with the first generation more than anyone, so I would have found it more meaningful if she had been with just them. Well, it obviously didn't go that way... so eh.

The PV was nice, and quite simple in the way you view it. Of course, being an AKB PV, this probably did have a big budget behind it, but for me it wasn't wholly impressive, though I will say that a simple PV fits bore-chan quite well, and as I said before, she looked pretty in this, and she sounded really nice too. If there's anything I have to credit Boring as watching paint dry for, it's her singing voice.

Also, watching Yuko shed emotion tears made me shiver, and then I smiled when Takamina smirked after seeing Atsuko turn her back and leave. Looks like someone's happy to see the back of her! 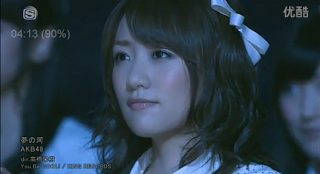 Spotlights mine now, B***h!
Okay, all joking aside... it was a nice video that was made well and it looks pretty. It's cute, and brings a nice goodbye to the video. I liked the boat scenes, and I liked how Atsuko left everyone behind as they smiled or cried. A very nice touch to a very nice PV...

... Though I swear she was walking towards the light at the end of the tunnel in the last scenes of the PV! Oh, AKB, is it going to be that bad when she goes? Is her career going to plunder?

... Well, whatever. Bye Atsuko! I won't be seeing you around any time soon now!


IT'S TIME TO JUMP SHIP!