All opinions within this post are my own and no one else's, unless otherwise stated or quoted. Feel free to express your opinion, as long as it isn't hate filled~ 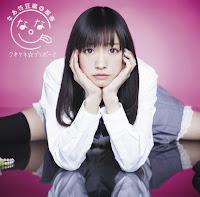 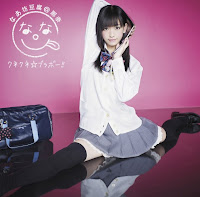 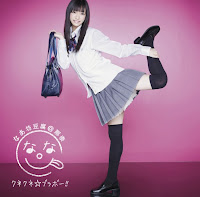 How does one describe Naaboudoufu@nana...? A new Idol on the scene who has freshly debuted, this Nico Nico Douga dancer turned Idol will be the opening act for Hello! Project's summer concert - and that's how I found out about her - by finding out that she will be an opening act for H!P's concert, which is pretty interesting. The last Idol that I remember did that was Kikkawa Yuu, and that was before her major debut. However, I have a feeling that her opening act is to test the waters, considering she has already made her (small) debut.
Anyway, from the little information I could salvage on this girl, she was, beforehand, a Nico Nico dancer who became pretty popular, and probably appeared on TV because of this, before being scouted and given the chance to have Tsunku write a song for her for her debut as an Idol.
But really, how would one describe her...? 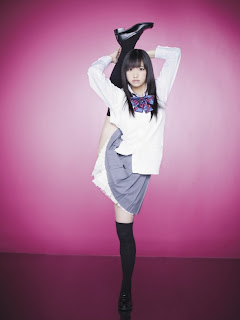 Bloody flexible is one description, legs is another... Hot damn them legs! No wonder her flexibility and her lovely legs are her gimmick!

Now, I think that it is safe to say that currently, there are mixed feelings towards this girl, more so towards the International side, and it lies mainly in her talent... or lack of. Given her flexibility, some people will pin-point that as her only talent, and say that she can't sing well or dance that great... and because of this, it seems that she's already gained quite a few haters...

But I will agree with that - she isn't a great singer, and honestly, her legs and her cuteness are the things you need to look out for with this girl. Though in all honesty, I find her extremely charming, so you can all put me on the 'I like her' list. 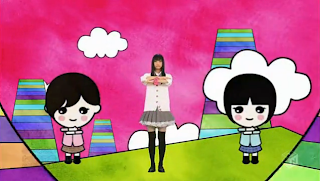 And I like this PV too, despite the extreme tacky cheapness of it all. It's like the director spilled a paint pot of rainbow puke all over the background to turn it into this colourful bundle of craziness that is present in the video. Seriously, the amount of colour and ever-changing pictures is pretty cheap, but hey, it's also pretty entertaining!
And so is Nana - damn she's adorable! I really found myself getting into the video because of her. Sure, she isn't the most entertaining or overly enthusiastic girl on the planet, but her smile and the little quirks she has during the dance are really charming. Did I mention that she's absolutely adorable? 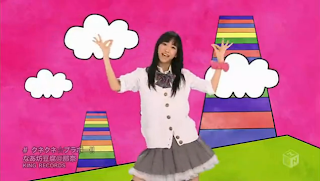 Anyway, if you've never watched this video, just from the screencaps you might realise that there's no plot to this video - it's all sheer dance, solo shot and colour galore! Really, there is nothing going on other than Nana herself, the colourful, ever-changing background and cartoon versions of Nana and her background dancers, but even so, it's still quite interesting to watch because of the cutie herself, and those crazy colours...
Ah, I want to paint so much now... and get out a box of crayons... 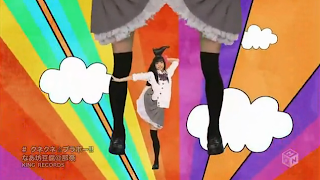 Legs legs legs... lots of dem legs! Mhm!~
There are also quite a few leg shots present in this video, and I guess that's because Nana has such lovely long and flexible legs, so of course they will show off what will make her appeal to people, right? So all you leg-loving wota out there, watch this video for some legs. Sure, there aren't many complex leg movements in this video, it's more Para Para than anything, but at least you get a close-up of them. Oh, and that one scene above where she shows off her flexibility to give you more reason to want like her... 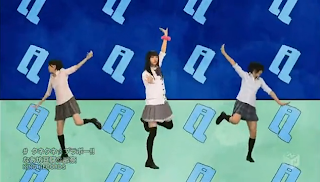 But yeah... other than a glorious amount of legs, the cuteness of Nana herself, and random cartoons popping up sometimes, there isn't much else going on in the video. It's pretty much the girls dancing in front of a green screen, and with a lot of random scenes popping up here and there throughout the video to give it colour and... a lack of creativity. But, despite the cheapness and the tacky approach, I quite liked the PV - but that's probably because I am so easy to please, and I love colour, cute girls and, for some odd reason, those backing dancers are fun to watch sometimes - especially the serious looking one. It's funny to see her look oh-so serious when you know that she wants to smile like the other one. 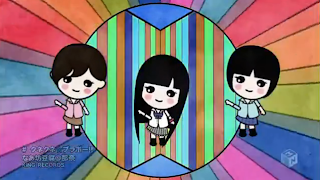 So whilst the PV really doesn't have much to offer in terms of a budget or creativity, I do think that you will be happy with how Nana is in the video. She looks happy and like she is enjoying herself, and whilst some will say she is boring or isn't that appealing, I really liked how she acted in the video. How she smiles is adorable, and she looked like she enjoyed dancing and being in front of the camera. For someone who's just debuted, she wasn't awkward at all and really took to being in front of the camera.

Then again... she was a Nico Nico dancer, right?


.Before I forget and end this post (like I almost did), let's talk about the song itself for the video - a song that was written (and probably produced) by The Man himself, Tsunku. Honestly, he's been really letting himself go all out with the electronic vocals, hasn't he?

Honestly, it's a really cute song, and I really like it - this has been the song that has been on a loop next to Koko Kara Hajimarunda by Kikkawa Yuu, and I haven't gotten sick of it yet! It's really catchy, and whilst Nana's voice isn't the greatest out there, it doesn't grate my ears like Momoko's or Riho's does sometimes (and Sashihara Rino, Eripon, Mayuyu etc...) which surprised me. With how some people were going on about her voice, I thought that I would hate it, but I surprisingly like, or even love, it.

Then again, I seem to like annoying voices unless it's Momoko Tsugunaga.


I like how the song goes - I love the little Yei's, Mhms~ and yells she does throughout the song, as well as the repetitive tune and lyrics. Actually, the tune kind of reminds me of a video game, and that's one factor that will draw me in - because it reminds me of my childhood when I would ignore everything else to play on a game like... it also reminds me of the fantastic summer song, Shiawase Beam! Suki Suki Beam!, so I guess that's why it's so appealing for me. It's nostalgic, but it's also fun and cute to listen to, especially when you're in a happy mood or need something fun to listen to on an off day. 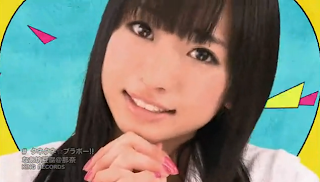 Okay, isn't she just the cutest thing? How could you not love that face? Not loving that face is like stepping on puppies...


The song is repetitive and fun, and it's easy to sing along to once you've listened to it a few times. Paired with an extremely cute dance (which is somewhat easy to follow until the leg over head part) and a crazy, psychedelic backdrop, you get a cute and whacky video which is sure to appeal to some people. 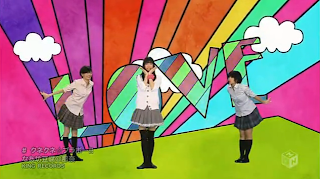 A whole lotta legs, and a bundle of cuteness, I think that the cuteness of the song and the tacky but eccentric amount of colour really works in favour for both the song and video. I don't think that you could get a nicer combination. Not the best combination, but it's better than tacky CGI in my opinion, and I really like how the video came out.

... Or maybe I'm just a sucker for cute idols with flexible bodies and mediocre voices which need to be auto tuned the heck out of.

Eh, whatever - I like the song and PV, and I'm pretty sure other people will too. There will be those who question my tastes (a lot of you, I bet) and some who will probably agree with me, but right now I like this girl, and I adore this song. Can't stop me from lovin' it, and I can't stop anyone from hatin' it, but you will have to answer to Nana with all yo' hate... 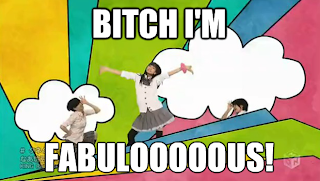 So, how did you find this Nico Nico dancer turned Idol? Yay or Nei? Please tell!