All opinions within this post and on this blog are my own and no one else's. We are free to give our opinions, and free to like what we want. If you do not agree with me or do not like my opinion, then that is your choice. Just please don't try to bash me for how I think and feel. Thank you. 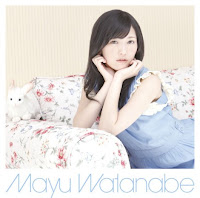 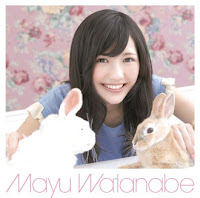 Watanabe Mayu of AKB48 is set to release her second solo single, titled Otona Jelly Beans, on the 25th of this month, and after the cuteness of Synchro Tokimeki, as well as the promising title (Adult Jelly Beans) and the announcement of Mayuyu ditching the pigtails, I was pretty hopeful for a more grown up and mature sounding single for Mayuyu...
Yeah well that isn't really the case with this PV. Basically, we still have the Creeper that we all know and love, so I was a little disappointed when my daydreams of Mayuyu actually sporting a classy, mature look with Jelly Beans on the side were dashed and cut into smithereens. Then again, this is Mayuyu. She will forever sport the kindergarten look until she gets wrinkles, I believe.
-Sigh- I don't think that cuteness can be ditched so easily... unless you're Sayumi, of course, Sayumi can switch cute into sexy in seconds.
So, if you have never watched this PV before, beware: It is filled with pink. Literally. Every scene is pink... other than one shot where there is a candy scattered background, but you get the idea. The video is just filled with pink and cuteness and ponies hands... I honestly couldn't believe the amount of screencaps that were over-the-top pink when I looked into the folder I had created for these pictures.

Honestly, it's pink overload. I'm actually thankful that a lot of other PV's tend to use different scenes, green screens or whatever for their backgrounds to give diversity, because honestly, this video is sometimes an eyesore. 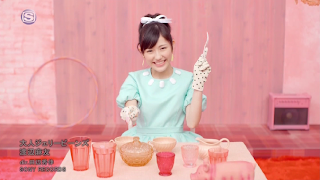 But that doesn't mean that the video itself isn't cute, because honestly, it is. The video may be extremely simple, but it's also really cute and really really fun to watch, and that mostly has to do with Mayu's performance throughout the video. Seriously, you can't take your eyes off of this girl. She's entertaining herself, and with a powder blue dress on and her cute creeper face, you can't help but notice her amongst the vast amount of candy pink walls that she has trapped herself in. She's pretty much a breath of fresh air throughout the video, and you become thankful that she's wearing such a nice, breezy colour which stands out against the eyesore backdrop. 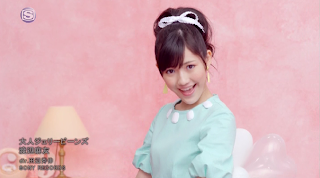 Mayu is, to put it bluntly, absolutely adorable in this - when isn't she!? She really took her cuteness to the next level, especially in her little acting scenes. She honestly looked like she was having fun, and she was just extremely enjoyable to watch. It was also nice to see how creepy she looked in some shots, but then again. that's Mayuyu for you - her smile is cute, but it's also extremely creepy! 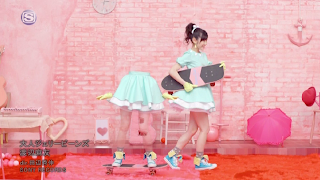 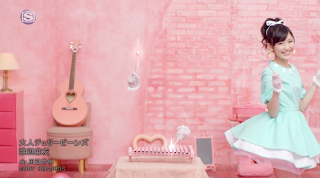 Aside from Mayu's cuteness, there were also some pretty enjoyable scenes in the video - such as all of the scenes where Mayu seems to create copies of her hands, legs and feet before running away, making sure that her body parts continue to do what she had started and (obviously) didn't want to finish. I really liked the effect, and I loved how mischievous Mayu seemed as she ran away smiling and staring at the camera, leaving her copied hands tapping away at the piano, her feet swaying on the skateboard etc etc... The effect itself is pretty simple, I guess, but it was nice to see how it was used for the video, and I loved how Mayu just seemed to enjoy herself throughout, making sure different shoes and gloves were being used for different things. It also gave a nice bit of colour to the video the more she did it, too. 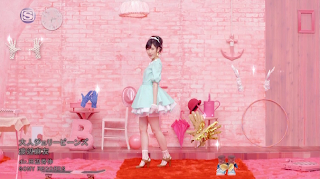 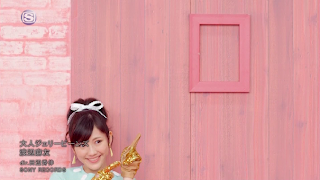 Now, my main issue with the video itself - other than the stupid amount of eyesore pink - is the dance, or lack of. Synchro Tokimeki was pretty much the same, but this video really takes the cake here. Where is the dancing!?


Honestly, all we get to see of Mayu is her waving her arms around and swaying as she smiles at the camera. I would have loved to have seen a little bit more, even if it was a more vigorous wave of Para Para, as opposed to the flimsy moves she pulls out in this video. Okay, so she's a soloist - but that doesn't stop her from breaking out the moves and giving something a little bit more. Maybe, just maybe if the dance had a bit more complexity, the video would have been even more interesting for me. I love Mayu's image and all, but this delicate act is a little boring sometimes.

I also noticed a lack of Jelly Beans in the video, which did disappoint me - but then later on I noticed that the bow on Mayu's back during certain scenes looks like it is made out of Jelly Beans, which I thought was a cute and weirdly nice touch - but that Jelly Bean bow also reminded me of a wind-up doll, one which you have to turn at the back with a key in order for it to work, and I thought it worked well for Mayu. I know she had a costume similar to that of a wind-up doll, but honestly, I would love to see her bring out that look in another video, and see her play as a wind-up doll who comes to life. That idea would certainly be more interesting than the one we have present, at least. 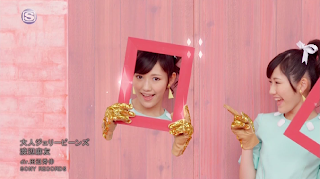 Speaking of Jelly Beans, the song is really quite cute, but also extremely forgettable and rather generic. There is nothing special about it at all, but I like that it fits Mayu's voice. She has a really cute voice which can be pretty unbearable at times, and a voice that doesn't really suit the more powerful songs (like Ogura Yui and Michishige Sayumi), so I find that a simple but cute song like this is perfect for her. She sounds adorable, and the instrumental is nice to listen to. Cute and simple - much like this little creeper herself!


So overall, this is a pretty simple release - the video is very basic, but also very cute and childish and matches the tone of the song. The song itself is also really simple and your general run-of-the-mill Idol song, but its a song and a video which really suit the image that Watanabe Mayu has.

... And whilst I would call this video a downgrade from the visually appealing and well-made video that was Synchro Tokimeki, I can't deny that Mayu really impressed me in this video. Whilst Otona Jelly Beans may not have the visual appeal that its predecessor has, it certainly creates a more fun and childish feel and really allows you to enjoy yourself as Mayuyu continues her mischief in creating a roomful of hands and feet doing various tasks she had set out for them to do. 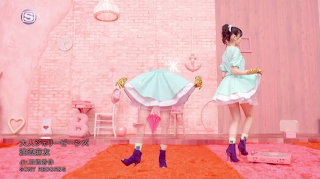 So whilst the backdrop is an absolute eyesore, I enjoyed how much Mayu stood out herself in the video. Even though everything was fairly simple, from the background to the dance to the effects used, Mayu herself was an absolute delight to watch here. She really looked like she enjoyed herself, and she truly shined throughout the video as she played along and created replica's of her hands and feet to continue dancing or doing little things that she had started. She was mischievous and charming, and she is extremely enjoyable to watch. I ended up falling for Mayu and her song in this video, and it makes me like her more as a soloist. Whilst I don't think that this is by far her greatest work, I do think that she really gave it her all in this video, and by doing just that, she made this video so much more enjoyable and definitely worth the watch. 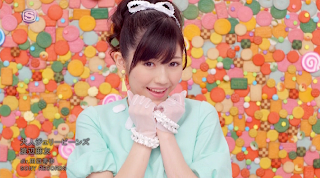 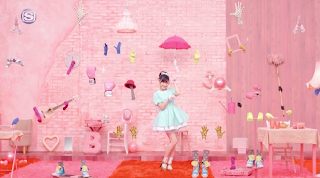 For a video that lacks Jelly Beans and an adult appeal, I think that Mayuyu won me over more than she did with Synchro Tokimeki. She's cute, childish and fun loving - everything that this PV is. It's simple, but it's just so darned cute, you won't care!
To put it bluntly: If you adored Koharu Kusumi (raises hand) and enjoyed Chance!, then you might just enjoy this, because basically, Mayuyu is the Koharu Kusumi of AKB48 - she has that certain voice, that style and a certain charisma to her which reminds me of my #1 Idol. So, give it a Cha-Cha-CHANCE, sit back and grab a handful of Jelly beans.
I just wish it was more adult... not in a perverted way!
Bathful of Jelly beans, bathful of jelly beans!
Let the cuteness overwhelm you, and allow the pink to melt your eyes! Muahahahahaha!
Chiima~