HouPri at 12 members, 3 have Graduated - I Cried 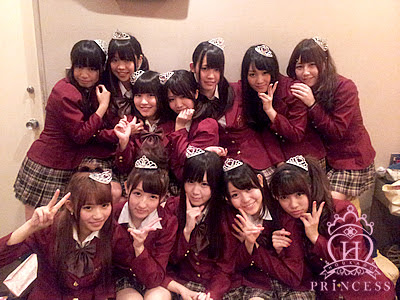 I've kind of known this for a while now, but I pretty much put it to the back of my mind because I didn't want to believe it at all, and I halted my research into whether it was true or not until now... But it's pretty much official for me now, because I finally decided that I would confirm what I didn't want to know.

Houkago Princess is now a 12nin unit, which means that three members have graduated.

I recently posted about the new members, albeit I was tired and I wrote like a drunkern sailor, but it's actually the afternoon right now, and finding out all this information has been pretty overwhelming for me, because when I found out just who had graduated, my heart pretty much broke when I learned that a certain member was no longer in the group.

The members who have graduated are:


Concerning Yumeka, I actually already knew she had graduated. She hadn't appeared in a few of the Ikebukuro videos for a while, so realising that she had indeed graduated wasn't as much of a shock for me as the other two were. It's sad that she graduated, and I think that it is for health related reasons, as she couldn't go to a pre-release event (I think) after being discharged from the hospital. This is all I found out from the official HouPri blog, but before that, I had come across a blog post from Yumeka's own blog, where she apologies and pretty much confirmed her graduation from the group. After reading the post, I was extremely sad, because whilst Yumeka was not my favourite member of the group, she certainly stood out because of her wonderful smile and her lower voice.


Miyashita Mayuka is the second member who has graduated. I was really unsure about whether or not she had, but after watching a few Ikebukuro videos of HouPri, where Mayuka appears, I realised that she had graduated as Ikebukuro listed only five members of the lineup, so I was sad to realise that Mayuka had also graduated. Whilst not my favourite member, I did think that Mayuka was extremely cute and really added to the group with her sweet face and cute voice. I will miss her a little, but not a lot.

Mayuka's graduation has been reported on her blog here and here, so please read.

Yuuki was my second favourite member of HouPri, but after realising she had graduated, my heart broke and I really did cry. I like Yuuki, she had a devilish look to her which was appealing. After realising that she was no longer in HouPri, I just felt like I had lost something. In fact, I felt like it was Koharu's graduation all over again. I honestly don't know what to think other than that I am really hurt by the fact that Yuuki has left the group. I seem to have become attached to her a lot, so of course I'm really sad she has graduated. Actually, I still can't believe it. Why, Yuuki, why?

The details behind the graduations are actually pretty vague, so I wonder why these three (well, Yumeka's is apparently health related as far as I know from research) have all graduated. Yumeka graduated before Mayuka and Yuuki, that's for sure, but during the time between the new members being announced as candidates, these two graduated. I'm still shocked by it, still heart broken, but also relieved that Hitomin hasn't graduated, because when searching the blog, I found a picture of Hitomin holding a bunch of flowers, and Mayuka had one too. So I thought for sure that Hitomin had graduated as well, but luckily, HouPri aren't ready to kill me yet.

I'm extremely sad that these girls have graduated, and it's affected me a lot more than I thought it would. HouPri are still a rather unknown unit, an Idol group which is Indies and still new to people, and that's why it was so hard to find this information and try to translate everything (Oh google, I hate your crappy translator) and get as much as I could to find who had graduated, and why. Everything is still vague, but I now know that three have graduated, and that HouPri is a 12 member unit.

So, for those who are curious, here is a list of the members of the new HouPri:

This is the new HouPri everyone, and whilst I am really sad about these sudden graduations Which I heard nothing about I am looking forward to HouPri's future as a new 12nin unit. Hopefully, no more sad news will come this way until about 5 years down the line... Then again, Idol groups like this graduation system, don't they?

Now, allow me to leave and listen to HouPri's Daisuki more because it is the saddest song on their 2nd single, and slowly takes away the pain of Yuuki's sudden graduation.

You can find an Apology on the HouPri Staff blog, which apologises for a mistake about the graduations (I think that fans mistook one of the graduations as Odagiri Nana's), but does confirm the graduations of some members. (apparently four...) Anyway, if you are able to understand it, please read it.

Now, I am going to go back to crying and thinking of Yuuki and listening to Daisuki because I am still sad...