This post is a little bit earlier than expected, because, like the dimwit I am, I updated by accident, and it confused the hell out of my sister when she tried to link to the post and it was no longer there. Oops.
Anyway, here's this week's post - but I guess now is better than next week, considering I wanted the Takahashi thing to be out of the way and all that :P Also: I have posted a picture of the Week. I have no idea if this will become frequent, unless I find a load of funny pictures.
Anyway, ONTO THE DIGEST! 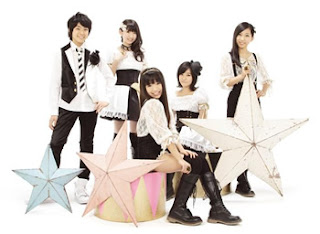 Dream5 have announced their next single! The Vocal/Dance unit of pure awesomeness have announced the title and release date of their 7th single as a group. It will be titled READY, GO!! and is set to be released this August on the 15th. As usual, there will be a regular edition as well as limited versions of the song. The song will also be used for a CM.
Okay, I'm looking forward to this! I have started to really like Dream5 now, and hope to continue being a fan of them. They have great songs, and their videos are always entertaining to watch. Also, with a title like READY, GO!!, it makes me wonder if this video will be energetic - I also wonder if it will be sports based? Who knows!
Source

Momoiro Clover Z have released their latest PV! Otome Sensou is the latest from MomoClo, and whilst this group may not appeal to me (Momoka appeals, though), I know that many MomoClo fans have been waiting for this video for a long time!

This is a long song - and I was already tired of it one minute in, but MomoClo have always impressed me with their videos. I don't care about their songs, but their videos are definitely some of the best out there in the Idol kingdom. It's interesting to watch, and is a PV that one would expect from this group. If you are a fan of MomoClo, definitely check it out and see if you enjoy it or not~

Scandal, it's a scandal I say! Burn your photo sets, drill holes into your photobooks, it's A SCANDAL!

Former Morning Musume Leader, Takahashi Ai, has been spotted with some arm candy! The lucky guy in question is Abe Koji, a 37 year old comedian. The two met back in 2011 when they co-starred in the stage play Hamlet, and have apparently been dating since Takahashi Ai graduated. This was published by gossip magazine FRYDAY on June 15th (2012), with further reports revealing that Koji and Ai are both living together, have had dinner together at a restaurant and also Koji was spotted dropping Ai off and also picking her up once he finished work. Currently, both agencies are denying their relationship. Let's see how long that lasts.

Regarding this news, if it is actually true (most likely is, I mean, they live together), then well done Ai-chan! I was wondering if she would turn into an old, loveless spinster like Yuko... Okay, I kid, but I'm really happy for her! I actually wondered who out of Gaki and Ai would be the first to get a man, and it seems to be Ai-butt, so congrats to her! She's 20-something, so she really deserves to have a relationship. But, if what this article says is true, then wow - she moved fast!

Anyway, congrats to Ai-butt - someone's finally tappin' dat butt. Now, let's wait and see how long it takes Gaki to get with Yuji...

You know you want it!