All opinions within this post are my own, and no one else's. Please respect my views on this single and the singer. If you do not like my opinion then you do not have to read what I have to say! If you don't mind my opinion, read on~ 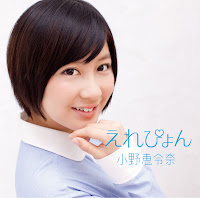 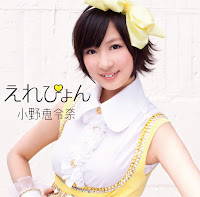 It feels like it's been a while since I did a single review on this blog, and I seriously need to write ore reviews on them, because sometimes I miss out B-sides when a new single comes out... C-ute's one which I am guilty of for that especially.
Anyway, the latest single which I have been obsessing over is, undoubtedly, Ono Erena's debut single! I really enjoyed the PV for this single, and fell in love with the singer herself before I had even heard the two B-sides which are present on the single. Even now I still really like Erena, and I adore this single! When I can, I will most likely purchase it and add it to my little collection of Idol things.
Okay, let's start this review before I turn into a puddle of Fangirlish Goop.
1. Erepyon
The title track and A-side of the entire single, Erepyon is a bundle of Idol love. It's a very passionately sung song, and it has a lot of energy throughout as well as superb vocals, and a bit of auto-tune added in there for a bit of difference. Thank goodness it isn't used all the way through the entire damn song. I love the entire sound of this song, and I love how the music compliments Erena's voice. She sounds absolutely fantastic! I was surprised by how she sounded throughout the song, but I love her vocals because they aren't overly sweet and unbearable like other Idols' vocals, and she can actually sing!
It's a pretty energetic song, with an up-beat instrumental and plenty of Idol-like goodness to keep you going. Whilst a lot of people will say this is your typical Idol song, I prefer to think that this song has a lot more character and charm to it than what other groups pull out. Basically, it's a winning song for me. I've listened to it more than once because I like it so much, and I will continue listening to it until my ears bleed!
2. Sentimental Girl
Sentimental Girl is the second song on the single, and is available on every edition barring the Limited C side. This song has a lot of energy throughout the chorus, as well as a more serious or sincere tone to it throughout the entire song. This actually has to be my favourite song of the three, I just love how it sounds and how well Erena sings it. It has a more mature tone to it than what Erepyon does, but doesn't lose out on the energy at all. It's a very catchy song and could get stuck in your head easily.
The arrangement is great, in my personal opinion, and I love how the song fits Erena's voice so well. She sings beautifully here, and this is the one song that I keep on a loop if I feel like listening to any of the three tracks on Erepyon. It's pretty addicting, but it's too good to resist! Oh, how I wish it had a PV to it like the other two do!
3. Kimi ga Ireba...
The final song of the three, Kimi ga Ireba is only one the Limited C edition of the singles and also has a PV to it, much like Erepyon. It's a very pretty song, one which isn't as energetic or up-beat as the previous two, but is still very nice to listen to if you want something that has a bit more of an emotional sound to the instrumental. Once again, Erena sings beautifully here, she really pulls off all of the songs she has sung, in my opinion. This may not be my favourite song out of the three, but it's a song that I don't really dislike either. I just prefer the more up beat and happy songs to listen to.
I actually still need to watch the PV to this song, but I love how gentle and soft this song is, despite how strong the instrumental is. Erepyon's voice really does sound great here, and I actually anticipate what the PV will be like because I like the arrangement, and would like to think that an airy video is the sort of thing that they would pull off for this song. It's an 'airy' sort of song, I guess, with a strong instrumental and great vocals from Erena.
Overall, this is a pretty strong single. I really like all three of the songs on here, they all have their charms, and I think that for a first single, Ono Erena did a fantastic job. It's the sort of single I would buy for myself because all of the songs are pretty awesome and wonderful to listen to. I am also happy that Erepyon is the opening track to the drama Legal High, though I would have probably found Sentimental Girl or Kimi ga Ireba more appropriate because of the more serious tones the two songs have when compared to the A-side track, however, I am glad that the single is getting promoted in such a way.
Let's hope that Erena will continue her solo career, and bring out a second single soon!
If you have listened to all of the songs, which one is your favourite?
Chiima~
PING!!! Idolminded Recommended Reading: June 22nd, 2012
Posted by Chiima at 21:33