Anticipating the Change and A New Era! ~My Thoughts on Morning Musume's Change!~

All thoughts and opinions stated within this blog are my own and no one else's. If you do not like my opinions or my thoughts then you do not have to read my blog. Also, I do not mean to offend - I honestly will respect your opinion as long as you respect mine and do not trample over what I think. Thank you. 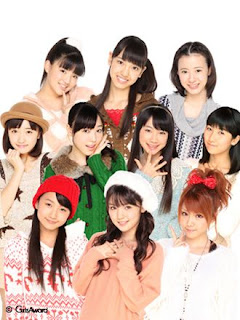 I know that these Morning Musume posts are getting a bit annoying, but honestly, so much has happened and there are a few things that I do want to address, because I love Morning Musume. They are my favourite Idol group, and I cherish this group a lot right now, so I do want to write all of my thoughts down.

On Idol Minded, Ray posed a question to us about what we thought of the future of Morning Musume, and it got me thinking. So much that I thought I would even make my own post on it. So, please go check it out and read all of our different opinions! Anyway, here goes...

I got into Morning Musume at 2009, we all know that - but that's the year all of the change in Morning Musume started. After being so docile and stable for a while, the first graduation happened - a graduation that would lead to many more. Koharu Kusumi then graduated during the Autumn concert of '09, and then a year later, it was revealed that there would be a triple graduation - Kamei, Jun and Lin would all leave Hello! Project and Morning Musume. That graduation had more of a blow on me than Koharu's, because at that point, I had liked Morning Musume for well over a year and had gotten attached to each of the members, though none of those three were my favourites. However, hearing that announcement made me cry. A lot. But then 9th generation auditions began, and I became even more interested in Morning Musume. 2011 as probably the year that was the biggest change to Hello! Project in years - The 9th generation were added, MoBeKiMaSu was formed, Takahashi Ai (finally) graduated, and 10ki were added soon after as well. And then, finally, in 2012, probably the biggest change (for me, at least) happened to Morning Musume - Niigaki Risa and Mitsui Aika graduated.

And then the 11th generation auditions were announced. And so here we are today!

But what does all of this change mean for people? For Morning Musume? The group has just lost two OG members, meaning that right now, there are actually only two of the 'original generation' left that older and current fans know of - Michishige Sayumi and Tanaka Reina. The rest of them are all new members, with one of those generations just barely passing by their first year in the group, and the other generation only just being added and getting a hold of the ropes. However, this is all very exciting for me and other people, because it means that Morning Musume are returning to the way they used to be - the sort of Morning Musume I was never able to experience.

When I think about what is happening to Morning Musume now, I only feel positive about everything. The sudden change in line up only means that Morning Musume are going through a new era, and that thanks to these sudden announcements - including the rather surprising and quick graduation of Mitsui Aika - this means that Gen 9 and 10 will need to do a lot of growing up, and to start working harder. It happened before, when the 9th Gen were new and shiny, only to realise that Gen 10 would be added. It was this kind of thing that made them grow up in a way, and become seniors to the new girls, even if there were a couple who were older than them. And it's happening again.

Gen 9 and 10 are all young and new and inexperienced in their own ways, but with all of these sudden changes going on, it helps the girls learn to grow and to work harder than they did before. Now that there are only two older members in the group, there will be less time for Sayumi and Reina to train Gen 9 and 10 when the new 11ki members come along, however many Tsunku plan to bring in. So, it will ultimately be up to Gen 9 and 10 to help them as well. There really aren't any more adult members now - The hard-up Mitsui, who proved to be such a good teacher and leader-like girl with the 9th gen, is gone, and so is Gaki. No doubt the new generation will be scared by Reina (it's sad but true) and less than intimidated by Sayu, so it will be pretty much up to the new generations to guide the 11ki and to help them grow as Idols, whilst still growing themselves.

Though I am happy with this change that is happening in Morning Musume, I honestly don't see anyone graduating in the next 1-2 years. Michishige Sayumi and Reina are the last shreds of the older generation, but with so many new and inexperienced girls, I can't see Tsunku or UFA asking either one of these two to step down any time soon. If Aika hadn't have graduated, I would have probably seen a graduation somewhere in early 2013, but not now. Morning Musume has lost 2 more members, and so I do feel that neither Sayu or Reina will graduate unless any of the new girls are ready enough to take up the leadership title - but again, that is rather doubtful. Fukumura is only 15 and is still too young to be a leader, and far too naive and shy - kind of like Ai-chan. UFA are most likely going to wait it out for another year or two before they even think of giving Fukumura the title of leader or sub-leader.

I can see a great change in Morning Musume - ever since 2011, UFA have really pulled their socks up. We now have two amazing new generations in the group, with a third along the way, as well as Morning Musume's 50th single, the 15th anniversary of Morning Musume! So much has changed, and Morning Musume (and the rest of Hello! Pro) has been receiving so much promotion and good publicity, that I am eager to see what the future has in store for the group. This new Morning Musume is a Morning Musume that I am eagerly anticipating. I am excited for it, and ready to experience a new era!

What about you? Are you all ready to experience this new Morning Musume?