To The Land of the Infected! - AKB48's 'Manatsu no Sounds Good!' PV Review!

Al opinions are solely my own and no one else's, unless otherwise stated. If, for some reason, you are offended by my opinion, then you have the right to not read this blog. If you do read this blog, though, remember that you should respect other people's opinions, and I will in turn respect yours. Thank you. 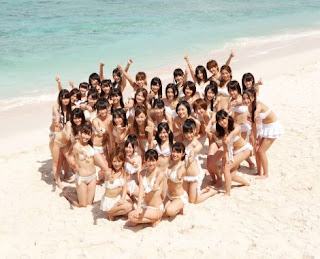 Ever since the PV preview for Manatsu no Sounds Good! appeared, people have been anticipating AKB48's 26th single with extreme excitement, and for bloody good reason, too - This single features a rather different and very distinct storyline, where the older members are being killed off like the kids in Battle Royale - but that is what the preview is telling us. Is the actual PV worth all of the hype?

Well, I'll get to my opinion on that matter later, but first, I would like to say that even I was excited for this PV. When I saw the preview, I fell in love with the scenes that were presented. They looked epic. AKB48 and the other sister groups have amazing cinematography, but generally, rather generic and okay-ish music. So, I was more so anticipating the video than the music. I know I'm not the only one, either, but there are few who aren't haters who actually admit that AKB have been pretty shit music wise lately.

Anyway, I digress - it's time for a pic spam! I never start with the review, mwahahaha!

Opening shot: Mayuyu killing off Atsuko for the centre position...

In all honesty, this is a cool way to bring in the opening title.

Everyone's down but Aa-chan... -gets out gun-

The members who aren't old and wrinkled are looking young, refreshing and happy...

Mayu: "My Creeper senses are tingling..."

Oh crap, the mini's found the oldies lying half-dead on the ground!

Don't worry, oldies, help is on the way!

Okay, this PV just got a whole lot better - seriously, I love these death scenes!

How bloody, this is awesome!

... That freaked me out, it honestly did xD

... Are you fucking SERIOUS?

The PV has been ruined for me now :/

Though, admittedly, the dance is quite good, albeit a little weird

... Where the fuck did this scene come from?

Seriously, you were all DEAD? Why are you alive and HAPPY?

Dance your little bikini butts away!

The only two survivors...

Mayuyu: "What's that?"
Atsuko: "Dafuq? Is that my career, failing before my very eyes?"

Mayuyu's happy, as is Aa-chan, you just can't see her emotion behind those dead, dead eyes of hers...

And that means that they are, too! OMG!

Okay, so the verdict?

In all honesty, I really enjoyed this PV and how it was shot... until the Bikini dance shot came in. I seriously wondered why the fuck that was even put in there, because it killed the mood for me, and I lost all of my excitement for this video. I mean, I don't mind it - but the epicness of this video was kind of killed when that bikini shot jumped in all of a sudden. The anticipation, the wonder and excitement I felt just died away at that point, and I was pretty much left disappointed with the rest of the PV there after, and that is how I honestly felt when I first watched this, and I still feel that way.

The start of the PV, as I said, is pretty epic - what everyone speculated as a Battle Royale themed video was actually shot on an island that held disease-ridden girls who were left for dead, with the younger members trying to save the girls to only end up dieing themselves because they basically tried to help the other girls, and I honestly think that that is a better idea than the Battle Royale theme that everyone imagined, because it's different, and it just shows how creative AKB48 are when it comes to visual content.

I thought that the cinematography in this was absolutely amazing, and the first part of the video was almost mind-blowing, making this video one of AKB48's best. However I did honestly feel let down by the bikini scenes. I knew they were there, but I didn't think that they would be edited in the way did, heck, when I first started watching the video, I honestly forgot that they would actually appear - but they did, and it ruined the mood of the video, and it kind of fell flat after that. It's still a well shot video, but it kind of went downhill after they brought in the bikini's, so yes, I was disappointed, and so was my sister. In all honesty, it would have been better (and cooler) if the girls were all dancing on the battlefield, in the rain, and then suddenly dieing off one by one randomly. This is actually what my sister thought up, and honestly, I would have loved to see that in this video! It would have been really cool, and it would have fit with the dark mood of the PV.

The end of the PV was a bit better, though, but it didn't make up for the horribly placed bikini scene - I liked how it symbolised that everyone has died. Showing all of the girls on the sunnier side of the island, in white dresses, whilst Mayu and Atsuko were journeying back to them made me think that everyone was, basically, an Angel, and that they were all waiting for Mayu and Atsuko to return to their group - and that actually made me realise that this video wasn't symbolising the death of the new members, but the death of AKB48 in general. Now, I may be thinking too deep when I say that, but it's honestly what I see when I watch this PV. The sudden fall of AKB48, because of Maeda Atsuko's graduation. Everyone in it dies, and Mayuyu and Atsuko are the last to join them. It is very strong, well placed symbolism, and I really like that about this video.

Again, I might be thinking too deeply, but seriously, I can't be the only one who thinks that this video symbolises the death of AKB48, or at least the death of the senbatsu, right?

Well, whatever I think, I do feel that this is a well shot video. I hate the bikini scenes though, they should not have been included (in my opinion), especially since all of these girls are so disgustingly bony and look boring in white bikini's. But the rest of it is beautifully shot, and it looks good. The beginning scenes are awesome, and I was so excited by them. Honestly, those scenes are the best that AKB48 have ever done.

And then there is the song...

Honestly, I really like this song! For a while, I have found that AKB48's songs all sound so similar and generic, but for once, I think that they have produced a good quality, really good song that would sell well on its own without a good PV to back it up. This is a nice song, really fun and a great contrast to the darkness of the video. I was surprised that a rather light-hearted and happy song was the track to the darkness of the beginning of the PV, but they strangely fit together.

Manatsu Sounds Good does have that AKB48 sound to it, though, and does fit into that Idol category in terms of sound, but it is better than a lot of the generic songs they have been releasing recently, and I really enjoy it. A great song for a half good, half bad video.

So all in all, it's enjoyable. There will be people who really love it, and people who will really not like it, but I'm kind of half and half on the video. In the end, we all have our personal tastes, and I know that not everyone will agree with how I view this video.

So, what did you all think about it? Was it worth all the hype and the wait?