All thoughts and opinions on this group and their single are solely my own and no one else's. I have the right to state my opinion, whether it is negative or positive, and wish for you to respect my opinions. If you do not want to respect my opinion, or do not write what I like, then go read a blog that backs up YOUR opinion. Thank you. 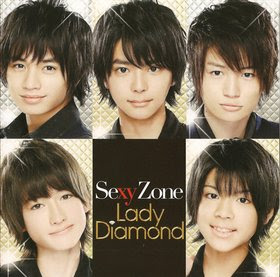 Lady, Lady, DIAMOND!~
Lady Diamond is Sexy Zone's 2nd single which was released on April 11th, 2012, and one of my current favourite songs in all of JE. The title track is catchy, fun and absolutely wonderful - When I first heard it, I knew that I had to have this single for myself, and so I ordered it in the form of Limited A, and seriously, I am so happy I bought this, because Lady Diamond is a winning single. I love it so much.
I actually never planned on buying this single. Originally, my first non-H!P purchase was going to be an indies group's single, but after listening to Lady Diamond and watching the PV, I knew that I wanted to purchase it. So, the minute I had money, I went and bought it... because yes, I am a crazy Sexy Zone fangirl now. So much for wanting to dislike them upon their debut... tch.
Anyway, let's get into this review of the wonderful single that is Lady Diamond!
01. Lady Diamond
The leading track is just wonderful - the moment I heard it, I fell in love. It is catchy, playful, fun and just an overall wonderful, colourful tune that is easy to get stuck in your head. It's so different to Sexy Zone, and really shows off a more playful and childish side to the boys that we didn't get to see in their debut single. You can really see how they are boys rather than men in this, and you can hear it too. With such a happy tune, how can you not hear how happy and energetic these guys are? I absolutely adore the energy in this, the plyafulness, the quirky, happy-go-lucky tune and the great voices of the members.
Now, this song is a very obvious Kento/Fuma lead single - Shori gets a bone thrown at him in the form of a Haiku, and Marius and Yo get a few ad-libs in there to give them something, but hell, I don't care that the line distribution sucks, because Fuma and Kento nail this single - their voices really fit the music, they sound great, and they add maturity to the song. I won't lie and say I wouldn't have wanted Marius and Sho to get something a bit more, because really, I would have adored those two to have solo lines in this, but I am quite happy with this distribution here anyway. I think that the people who were right for the lines got those lines.
I adore this song, I will probably keep saying that, but I seriously do - I love the cute, quirky, energetic and happy nature it has, and how fun it seems to be. I think that this song is amazing, and I really have nothing bad to say about it. However, if you do think of listening to this and watching the PV, make sure that your father isn't standing there when Marius Yo mouths to the words Touch Me, because seriously, you don't want to look around awkwardly whilst you try to think about how you can explain just why a 12 year old is singing about you touching, holding or kissing him... Luckily, my father ignores these things.
Anyway, this song a perfect contrast to Renai Hunter by Morning Musume. For these two songs to come out on the same day, and have totally different sounds and a totally different feel is amazing. I love how Lady Diamond is so cute and energetic, with some child-like themes thrown in there as well as the happy tone to the song. For me, this is a perfect song. It's great, and I really do prefer it over Sexy Zone.


Kaze wo Kitte is a much cooler, more mature song when compared to Lady Diamond, and reminds me slightly of dance remixes that you would get in a club. This is the track that really shows off the more mature and boyish side to this group, and showcases Kento, Fuma and Shori's voices the best. I would not exactly say that this single was made for Sou or Marius at all, because the vocals in this are rather low and need a little more power in order to really carry this song off, and that's why it is predominantly a Kento/Fuma/Shori song.

I was actually expecting a 'cool' track to appear on this single, because it is the best way to compliment a fun and up-beat track like Lady Diamond, and creates a great contrast - and it really does. The maturity, the cool tone and the dance-like track is a great detour from that childish route they took with Lady Diamond, and you are reminded that three out of these five boys are maturing into young men, and they really express their maturity and, let's call it manliness for now, in this song. It's a great song, it really is - and I am glad that it is a lead for the three older members, because I don't think that Marius and Sou could handle this kind of song yet.

I enjoy the dance theme surrounding this song, the ever-changing instrumental, the coolness to the song and how well it shows off certain members voices. It really reminds me of club music, something that you could easily dance to on your own or with friends, and all in all, it is a really great track that compliments Lady Diamond without taking away from the leading track or being better than it.


High!! High!! People is basically the polar opposite of Kaze wo Kitte, as it goes down the route of that happy-go-lucky, pick-me-up sort of song that really gets you in a good mood if you're feeling a little under the weather. Just like the previous two songs, this is one great song, and has more focus on all of the members rather than a select few. You get a solo line from everyone, and you hear more of the group rather than certain boys on their own. I really loved how the group parts were done in this - I felt like there was more of an emphasis on how they sounded as a group here as opposed to how they sounded solo. I just feel that this song shows off their skills as a group more rather than how they sound as individuals, like the other two songs.

This song is catchy - it is energetic, up-beat, happy and fun. It isn't childish or giddy like Lady Diamond is, but it is just as fun and it has this really happy and energetic feeling to it that can kind of out-run the happiness of Lady Diamond. It is a wonderful song that shows off the guys' vocals well in solo's and really shows off how well they all sound together, and I love how that is expressed through this song. They all sound so happy, and they sound like they are really having a good time with this song. It actually makes me wonder how this song would be with a PV if it were the A-side.

Thinking of the song title, this song really does make me feel like I am high in happiness. It really makes me energetic and gives me a good feeling. It really helps you to feel much better, and it can truly bring a smile to your face. I think that this would have to be my favourite song on this single, because it is so good.


Yuuki 100% is the '4th' track on the single, and is only available with the regular edition and is a cover of NYC's version of the song. Now, I have not actually listened to NYC's version, so I can't really compare the songs at all and says who is better, but I really like this song - probably not as much as High!! High!! People, but enough to get me interested in listening to the original version of this song.


Anyway, the opening of this song (and pretty much the rest of it ) reminds me of a Marching Band, in a way, because of the instruments used in the instrumental, and how the guys all sound during the entire song. I could really imagine them all dressed in uniforms, with different instruments, walking along a street and singing this song. It sounds so happy, so friendly and really wonderful. I would have loved to have seen a PV with this, even though this isn't their song, but I think that these guys have really made it their own. They sound so happy, so energetic. They sound like they really had a blast singing this, and you can really hear that in the group parts. Really, they all sound so wonderful. It makes me adore them more as a group, and really makes me like all of them as singers and entertainers. They sound amazing together here.

I also love that everyone gets a chance to shine in this song with a solo line - you can hear each individual member, and even though Marius and Sou sound less experienced than the smooth voices of Kento, Fuma and Shori, you can tell that the two youngest members had so much fun, and that they put their all into this single. Their inexperienced voices actually make this single so much better in my opinion, because they have such enthusiasm, such passion for this, and you can really hear it. They really loved singing this, and you can hear it in every line that they sing.

This is such an enjoyable song - it's energetic, it's happy, and I love that it is heavy on Sou. It sounds amazing, and is quickly becoming one of my favourite songs. I honestly wish that I had purchased the Regular Edition now, because you can't get this song on the Limited A or B.


This is one amazing single - you get three wonderful, energetic songs, and one amazing but cool song to give you something different. All of these songs are amazing, and in each of them you get to hear different sides of the group. We are treated to not only the quirkyness of Sexy Zone, but also the mature, more manly side of the group as well as being able to hear how amazing they are as a group. This single has really blown me away. All of these songs are strong, they are all wonderful in their own way, and really strengthen the single and the group more. I'm so happy that I was able to purchase this single, because it is really great, and just shows how great Sexy Zone is. From this single, I can really see why they were debuted despite how young some of the members are. Despite their age, this group is really amazing and talented.

I honestly suggest that you all give this a listen - it's a great single, one that is worth listening to and even buying if you are thinking of purchasing it. But, if I had to give you one track to listen to out of all four, it would definitely have to be Yuuki 100%, despite the fact that it is a cover. This song is amazing, and I highly recommend that you listen to it, because it is, in my opinion, great.

Overall, this is a great single. Strong songs, amazing singers and performers, and an overall bundle of absolutely overwhelming perfection. Seriously, I didn't expect Sexy Zone to produce something so wonderful.